[Savage Minds is pleased to publish this essay by guest author Gastón Gordillo as part of our Writers’ Workshop series. Gastón is Acting Director of the Peter Wall Institute for Advanced Studies and Professor of Anthropology at the University of British Columbia. A Guggenheim scholar, he is the author, among other books, of Rubble: The Afterlife of Destruction (2014, Duke University Press) and Landscapes of Devils: Tensions of Place and Memory in the Argentinean Chaco (2004, Duke University Press, winner of the AES Sharon Stephens Book Award). He blogs at Space and Politics.]

When the Roman Empire collapsed, numerous libraries and an unknown quantity of books disintegrated with it. Amid a rising Christianity hostile to traces of paganism, the texts of many authors admired in Roman antiquity were turned to dust and the memory of their existence dissolved. Pieces of writing by noted figures such as Cicero or Virgil certainly survived, but the majority of what these men wrote has been lost. This was an epochal moment in the history of writing: an imperial collapse so profound that it physically disintegrated vast amounts of texts, erasing them from human memory.

Some books from ancient Rome were saved from this massive vanishing of written words only because a few copies survived for over a thousand years in the libraries of European monasteries. This survival was often the outcome of pure chance: that is, a set of conjunctural factors somehow allowed those books, and not others, to overcome the wear and tear and ruination of paper and ink by the physical pressures and cuts inflicted on them by the weather and by the living forms attracted to them, primarily insects, mice, and humans. In these monasteries, many ancient books and their words disintegrated after a few centuries, gone forever. But others lingered and were eventually copied by hand again on new and more robust paper, which could withstand atmospheric and bodily pressures for the next two to three centuries. Three hundred years or so later, another monk would grab a manuscript about to disintegrate and copy those words again. Who knows how many amazing books were eaten away by bugs simply because no monk chose to save them from their ruination? One of the books that miraculously survived in a monastery over a millennia of chance encounters with the void was Lucretius’ extraordinary philosophical treatise De rerum natura, The Nature of Things. END_OF_DOCUMENT_TOKEN_TO_BE_REPLACED

Ah, summer reading lists: Elaborate plans for personal enrichment and literary sophistication made in the spring and carried out… when? It’s easy to find tons of summer reading lists and recommendations out there every year — especially in the Northern hemisphere, where it’s actually summer (there’s snow falling in Canberra atm, remember). But what happens after those lists are actually made? END_OF_DOCUMENT_TOKEN_TO_BE_REPLACED 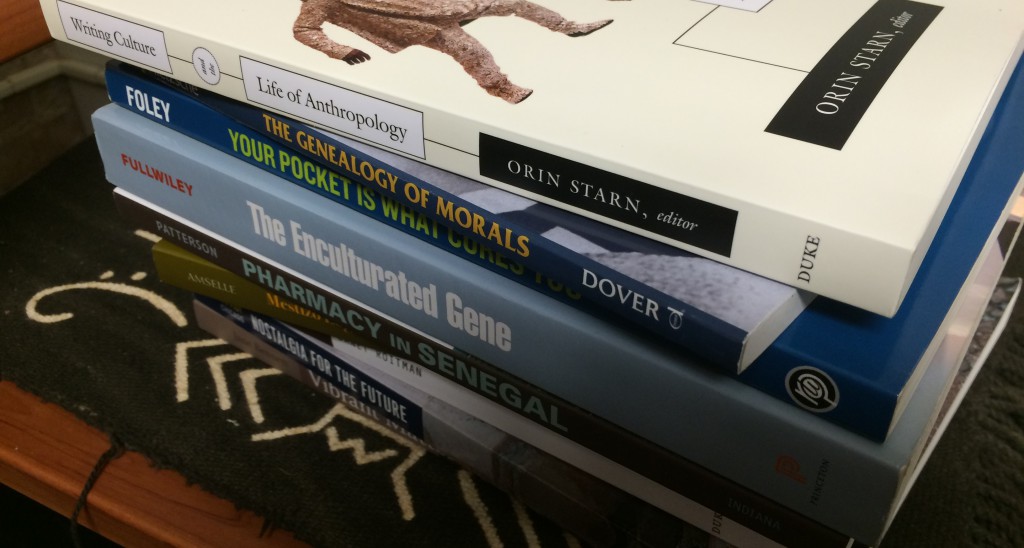 The semester is nearly complete, and summer is upon us. After finishing my first year in graduate school, I have this to say: I had no idea that I was capable of reading so much so quickly. Wow.

And yet, there were many things that I wanted to read and could not fit into those tiny pockets of “free” time. You know what I’m talking about, right? You get that itch that says, “If only there were more hours in a day, I would totally pick that book up!” And reading Carole’s Ethnographic Theory syllabus is not helping matters.

So I need to keep this momentum going; here is my summer reading list for 2015. It serves a few purposes, so it has to be somewhat calculated. This time next year, I’ll need to turn in a substantial literature review that gestures (somehow) toward my dissertation research/proposal, so now is the time to ramp up my consumption of readings that will contribute to it. There are also some things that I feel like reading, because “How have I gone this long without reading that” (e.g. Nietzsche)? One is out of sheer curiosity (i.e. Bennett). A few things I’ve read in the past, but I’d like to revisit with a full year of graduate social theory seminars under my belt (e.g. Foley, Fullwiley). And I owe Duke University Press a review (i.e. Starn; coming soon!). Naturally, this does not include the rapidly growing list of articles – classics, landmarks, and brand new publications – that I’ll need to whittle away.

In order (by nothing other than a sense of urgency, I guess): END_OF_DOCUMENT_TOKEN_TO_BE_REPLACED

I’ve received a lot of criticism in my life, but no one has ever accused me of having writer’s block. I do it all the time. On this blog, in my academic writing, in Amazon book reviews… I write write write. I wasn’t always a good writer or a fluent writer, and it took me years to get to the point where I could wake up every morning and feel that I could write five thousand words a day if I had to, and couldn’t sleep at night if I’d written less than a thousand. Many of my greatest teachers were role models, people who wrote comfortably and fluently and loved to do it. But I’ve also benefitted tremendously from good books on writing. Since we are doing the Savage Minds writing group this year, I thought I would share my favorite tips for books on writing. As an anthropologist, actually, when I say ‘books’ I really mean the conversations behind (and within) the books. And behind the the conversations I see the concrete networks of scholars. When it comes to books about how to write, there are two key figures who anchor two different (but related) literatures: Robert Boice and Joseph Williams.

END_OF_DOCUMENT_TOKEN_TO_BE_REPLACED

I have a suggestion for Copyright Week: Let’s ask the AAA to release their books and monographs into the public domain. After all, one of the easiest, most important, and least risky things the American Anthropological Association has ever done is to put into the public domain all of its journal articles published prior to 1964. By doing so, the AAA took our heritage as anthropologists and made it available to the world — exactly as it should be. The decision making behind this move was a little complicated (I can tell you about it later), but the decision making behind our next one doesn’t have to be. Let’s do the same for all the books and monographs the AAA hold copyright for — regardless of when they were published.
END_OF_DOCUMENT_TOKEN_TO_BE_REPLACED