[Savage Minds is pleased to publish this essay by guest author Gastón Gordillo as part of our Writers’ Workshop series. Gastón is Acting Director of the Peter Wall Institute for Advanced Studies and Professor of Anthropology at the University of British Columbia. A Guggenheim scholar, he is the author, among other books, of Rubble: The Afterlife of Destruction (2014, Duke University Press) and Landscapes of Devils: Tensions of Place and Memory in the Argentinean Chaco (2004, Duke University Press, winner of the AES Sharon Stephens Book Award). He blogs at Space and Politics.]

When the Roman Empire collapsed, numerous libraries and an unknown quantity of books disintegrated with it. Amid a rising Christianity hostile to traces of paganism, the texts of many authors admired in Roman antiquity were turned to dust and the memory of their existence dissolved. Pieces of writing by noted figures such as Cicero or Virgil certainly survived, but the majority of what these men wrote has been lost. This was an epochal moment in the history of writing: an imperial collapse so profound that it physically disintegrated vast amounts of texts, erasing them from human memory.

Some books from ancient Rome were saved from this massive vanishing of written words only because a few copies survived for over a thousand years in the libraries of European monasteries. This survival was often the outcome of pure chance: that is, a set of conjunctural factors somehow allowed those books, and not others, to overcome the wear and tear and ruination of paper and ink by the physical pressures and cuts inflicted on them by the weather and by the living forms attracted to them, primarily insects, mice, and humans. In these monasteries, many ancient books and their words disintegrated after a few centuries, gone forever. But others lingered and were eventually copied by hand again on new and more robust paper, which could withstand atmospheric and bodily pressures for the next two to three centuries. Three hundred years or so later, another monk would grab a manuscript about to disintegrate and copy those words again. Who knows how many amazing books were eaten away by bugs simply because no monk chose to save them from their ruination? One of the books that miraculously survived in a monastery over a millennia of chance encounters with the void was Lucretius’ extraordinary philosophical treatise De rerum natura, The Nature of Things.

What got me thinking about the ruination of written words is Stephen Greenblatt’s fascinating (if uneven) book The Swerve, which narrates how in 1417 a book-hunter discovered Lucretius’ The Nature of Things in a remote monastery. In my book Rubble, I examined how different forms of ruination, from the Spanish conquest to the soy boom, have created constellations of nodes of rubble in northern Argentina, many of which are perceived by locals to be haunted (Gordillo 2014). I therefore read The Swerve with an eye sensitive to the destruction of places and matter and the affective materiality of their debris. The richness conveyed by Greenblatt’s story of the vanishing of Roman books reveals that the physical disintegration and afterlives of rubble also involve the written word, which in the modern world is often presented as an emblem of human endurance. 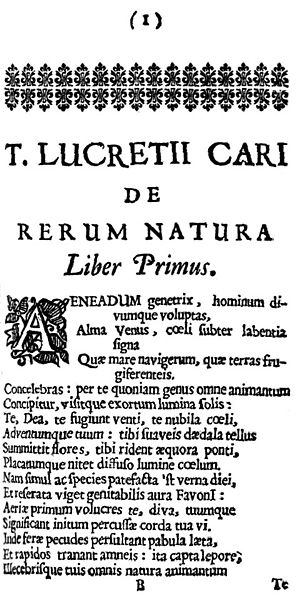 The striking thing about The Nature of Things’ close encounter with its ruination is how closely it resonates with Lucretius’ ideas about matter, contingency, decay, and the void. Lucretius conceptualized and celebrated in poetic verse the immanent materiality of the world through the lens of Epicurus’ atomism: the thesis —first articulated in Greece centuries earlier— according to which everything is made out of atoms and void. Written around 40 BC and admired as well as controversial in its days, The Nature of Things argued that atoms are always moving in the void, clashing with each other because of their clinamen, or tendency to “swerve.” Amid whirlwinds of random collisions, atoms create the energy of the universe and all motion, life, and destruction. Hostile to religious transcendence, Lucretius celebrated chance and the sensuous, fleeting becoming of life. The Catholic Church condemned Lucretius as a pagan writer and by the early middle-ages De rerum natura had been largely forgotten, except by a few scholars who saw it cited in ancient texts. Yet in a remote monastery those ideas lingered in the fragile materiality of those written words penned by a man who had long been dead. Those markings on paper were not just signs with meaning and poetic symbolism: they were traces, left by a human hand, that had the power to affect.

Once discovered and disseminated more widely as a book in 1471, Lucretius’ text subsequently affected some of the most prominent physicists of early modernity such as Gassendi and Galileo. As Greenblatt shows, when in 1633 the Inquisition condemned Galileo for claiming that the Earth moved around the sun, one of the charges was that he was under the influence of atomism and its pagan physics of motion, which contradicted Aristotle’s ontology of spatial fixity and stasis. As Michel Serres has argued in The Birth of Physics, Lucretius is often misread as an imaginative poet rather than a rigorous philosopher of physics. But the quantum revolution in physics in the 1900s demonstrated that Lucretius had brilliantly anticipated, if in rudimentary form, that the material makeup of the universe comprises, indeed, a ghostly dance of subatomic patterns in the void. Further, Lucretius deduced the existence of atoms through the observation of the decay and decomposition of objects such as books, which in disintegrating into smaller and smaller fragments reveal that the seeming solidity of matter hides its constitutive void.

The story of the greatest philosophy book that survived from the times of the Roman Empire may seem distant from the experience of writing in our high-tech, hyper-digitized twenty-first century. Writing has become so deterritorialized, so agile in its capacity to connect humans across continents through screens, cables, and fiber optics that it is easy to forget that writing has not ceased to be, and cannot but be, a material practice that produces a physical object, the written word. Today, as it was in the days of Lucretius, writing is a form of thinking that mobilizes a geometry between the hands (or other bodily organs) and tools for leaving material traces on an object. On a computer, these traces may be digitized but bits of energy are material nonetheless. This materiality makes of written words, either printed or digitized, objects always-already subject to ruination. As in medieval monasteries, to prevent written words from vanishing, human beings have to copy them over and over again as hardcopies or data files. Writing undoubtedly creates transcendence, and what Lucretius wrote indeed survived his times and still affects us today. But written words are immanent traces that, like all objects, as Lucretius wrote, eventually decompose into atoms moving in the void.

3 thoughts on “The Ruination of Written Words”