What courses do professors teach and why? Who determines what students need to know? In my department we teach a combination of required courses and elective courses at both the undergraduate and graduate level. At the graduate level, I regularly teach a semester of our year-long introductory theory course, and other times I teach seminars focused on more narrow topics either in one of my specialties or an exploratory course. This semester I am teaching the latter: a new graduate seminar in ethnographic theory. In the spirit of our not-quite-official Savage Minds series on teaching, I offer some thoughts here on why and how I am teaching ethnographic theory this semester.

Right now, where is intellectual energy in cultural anthropology? This seminar is designed to ask and answer this question through looking at scholarship from the last several years organized around the concept of ethnographic theory. Our overall prompt is dual, both the call for a ‘return’ to ethnographic theory in the now four-year old journal HAU: Journal of Ethnographic Theory and recent reflections in Cultural Anthropology on the current anthropological moment twenty-five years after Writing Culture. On the syllabus, I wrote the following introduction to the course which is officially titled “Ethnographic Theory: On Philosophy, Method, and Writing:”

What is the ethnographic? How do we practice and write ethnography? In this seminar, we will look beyond ethnography as method to consider the ethnographic as theory. Ethnographic knowledge is both epistemology and ontology, a way of knowing and a way of being. It is experiential, embodied, and empathetic, and is the foundation of field efforts to arrive at—as Clifford Geertz so famously stated in 1974—how people collectively explain themselves…to themselves. It is through ethnography that we can get to “where true life and real lives meet.” Ethnography is excessive and it is messy, but so is life. Our goal in ethnographic research is to get to this excess and messiness, to the lived expectations, complexities, contradictions, and possibilities of any given cultural group. In this seminar, we will explore ethnographic theory through reading in three areas: political subjectivity, ethnographies of the suffering subject, and the ontological turn

When choosing texts for the course, I envisioned a seminar of mostly anthropology grad students and a handful of other students from other disciplines, as is custom here on our campus. My anticipation was that students would take this class after having completed the year-long core course which introduces new grad students to classic and contemporary history and theory in anthropology. I was wrong on both counts. There are eleven students in the course. Five are anthropology grad students, both MA and PhD students, including two who have not yet taken the year-long core course. Six are grad students from other disciplines—Communication, Digital Humanities, Geography, and Religious Studies—some who have taken anthropology courses before, and some who have not. As a result, this seminar has included more reflections on and deep discussion about what anthropology is than I anticipated. Getting to ethnographic theory first requires an immersion in anthropology. I confess that while my commitment is to an ethnography that is interdisciplinary, it is also to ethnography as an epistemological practice and philosophy that must be grounded in a discipline. In the case of this seminar, that discipline is anthropology. 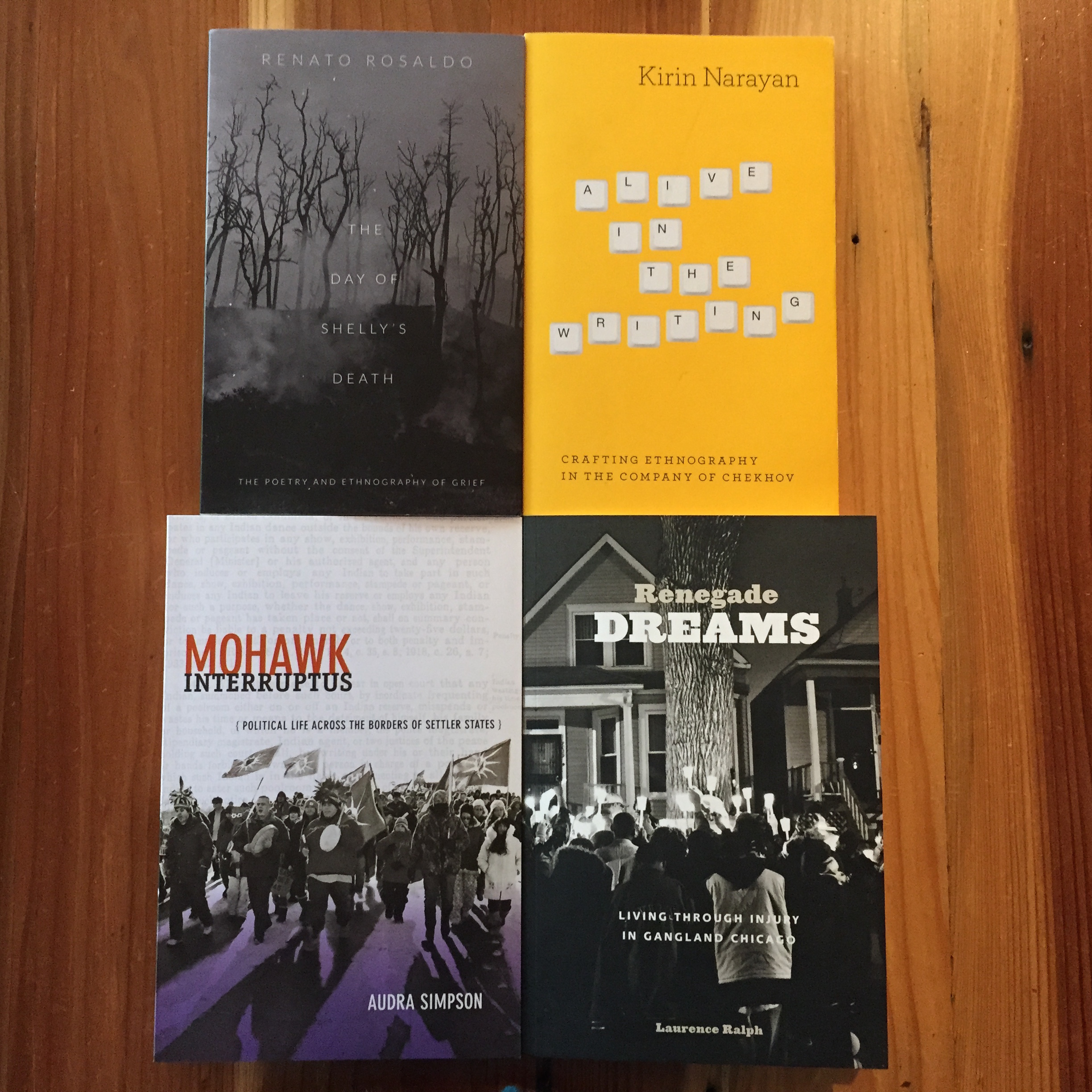 The first tasks we collectively had were to articulate the current intellectual/political moment and to clarify what ethnographic theory is, given that while the term makes immediate disciplinary sense, as a named practice or approach it is still new. The course thus began with a two-week series of readings designed to ground the course in contemporary anthropological theory. How in the world to do this in two weeks? Ruthlessly, I had to pick and choose, selecting texts that I felt were both representative of this new ethnographic and theoretical moment, both in getting us there and also in naming it, as well as texts that covered a range of anthropological scholars, traditions, and writing styles. It was impossible to fit in every text or every scholar I wanted to include. As with all syllabi, I had to make hard choices. The seminar meets one time per week, every Monday afternoon for 2.5 hours. Here are the texts we read in week one and week two (although the students had three weeks to do this reading due to a university holiday):

Favret-Saada, Jeanne. 2012. “Death at your heels: When ethnographic writing propagates the force of witchcraft,” HAU: Journal of Ethnographic Theory 2(1): 45-53.

Most of these articles worked beautifully for the seminar, but some were slightly off or not the best representation of a certain scholar’s work. Nonetheless, from these two weeks’ worth of foundational readings, we turned to the book section of the course (which was another ten weeks of readings). We started with Anna Tsing’s Friction: An Ethnography of Global Connection (Berkeley: University of California Press, 2007), which provided our grounding orientation to what ethnographic theory might look like in book form, and which with a 2007 publication date was the “oldest” book on our list. Friction did a phenomenal job putting numerous topics into conversation for us: the relationship between ethnography and theory, writing style, author’s intention and goals, audience, and again and again, the generative ways in which theory arose from ethnography throughout the project.

We moved next to a series of readings on the ontological turn. We first read Eduardo Kohn’s How Forests Think: Toward an Anthropology Beyond the Human (Berkeley: University of California Press, 2013), followed by Lucas Bessire’s Behold the Black Caiman: A Chronicle of Ayoreo Life (Chicago: University of Chicago Press, 2014), followed by a week of readings from a range of authors:

From the ontological turn, we next read a combination of works in the realm of political subjectivity and the suffering subject. Joel Robbins’ essay “Beyond the Suffering Subject: Toward an Anthropology of the Good (JRAI, 2013) was crucial here in articulating a move in the discipline in response first, as Robbins argues, to Trouillot’s ‘savage slot’ critique with the ‘suffering subject’ literature, and now in the current moment the question of where we are headed in response to criticisms of a suffering subject; as his above title indicates, Robbins suggests that it is to a notion of the good. The seminar is still in session, so it is not yet time for a full reflection on this, but while we see ‘the good’ in the mix, we also see a new, unapologetic turn toward a sort of gritty, yet hopeful political.

The books we read (and are still reading) in this section of the course are, in the order we read them:

Stevenson, Lisa. 2014. Life Beside Itself: Imagining Care in the Canadian Arctic. Berkeley: University of California Press.

Finally—and this will come as no surprise to regular readers of Savage Minds—we are ending the seminar with a section on writing. Writing matters to me, and it matters to anthropologists. All of the books we have read so far truly stand alone in their topics and styles, and yet each is well written. Some people arrive in graduate school already wonderful writers, while the rest of us have to learn to write in graduate school. Regardless of when one finds their writing voice, we all need to keep thinking about what it means to write ethnographically. We thus will end the seminar with a “how about” book about ethnographic writing by Kirin Narayan, and with Renato Rosaldo’s singular work of ethnographic poetry, theoretical reflection, and personal lament:

Narayan, Kirin. 2012. Alive in the Writing: Crafting Ethnography in the Company of            Chekhov. Chicago: University of Chicago Press.

The seminar is ongoing, but the semester is winding down. When one teaches a course for the first time, you don’t know how it is going to go, nor do you know entirely what you (as well as the students) are going to learn. As professor, this seminar has been eye-opening for me in thinking about what it means to generate theory out of ethnography in ways that go beyond how we might’ve discussed this at earlier points in the discipline: e.g., applying theory, using theory, putting ethnography in dialogue with theory, etc. Instead, what might a more conscious generating of theory via ethnography look like? Who does it well? What we’ve taken away as a key point is that while there are many ways to do this, the most successful examples are specific to the individual context, research, and scholar, and yet open to the possibility, even encouragement, for use elsewhere. The theory feels true to the ethnography.

Student assignments include a weekly response essay shared over email with all students in the class as well as me the night before seminar, both to get the conversation started before class begins, but also so that students are writing for each other and not just for the professor. Students also had to write two 5-6 page essays, one on ethnographic theory and the current moment in anthropology, and one on the ontological turn. The final assignment for the class is a 15-20 page research paper considering ethnographic theory in the context of their own ongoing research.

In conclusion, I share two quotes I used to open up our conversations about ethnographic theory:

On the need to ‘return’ to ethnographic theory, or as Giovanni Da Col and David Graeber argue in the inaugural issue of HAU:

“to return anthropology to its original and distinctive conceptual wealth—to critical concepts we bring from the field, whether exotic or urban—and thereby, to return ethnography … to the forefront of theoretical developments in the discipline” (2012: viii)

On ethnography and the historical specificity of the current moment, as Kim Fortun asks in “Ethnography in Late Industrialism:”

“What is the task of ethnography [in this] moment? … What would make ethnography ‘appropriate’ to the historical conditions in which we find ourselves today?” (2012: 449)

Yes and indeed. It’s been a great seminar so far, one in which I read most books for the first time along with the students, and thus there were elements of shared intellectual discovery truly invaluable to thinking through the ‘now.’  Sometimes it’s good to reflect back on things, and other times the urge comes to think through something while you’re in it. That’s where we’ve been this semester, but next year it could be an entirely different story…..

12 thoughts on “What We’re Teaching This Semester: Ethnographic Theory”