Dr. Zoe Todd (Red River Métis/Otipemisiwak) is an Assistant Professor of Anthropology in the Department of Sociology and Anthropology at Carleton University in Ottawa, Canada. She was a 2011 Trudeau Foundation Scholar. She researches Indigenous feminist (Métis) perspectives on the anthropocene, extinction, human-fish relations, colonialism and Indigenous legal orders/governance in Canada.

View all posts by Zoe Todd →

This piece originally appeared as a Twitter essay I published on November 4, 2017. I am re-posting it here with minimal edits to improve clarity and formatting. 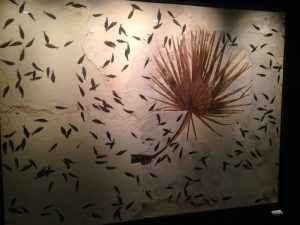 fossilized fish and plants at the Peabody Museum, New Haven

One: find your beloveds. Find your beautiful soul-kin. Check in with them every day. Tell them they matter. Weather storms together, like schools of fish in rough seas.

Two: Manifest care however you can, to whatever extent is possible in your given circumstances. Choose care. Choose tenderness. Admit to yourself when you are enacting care in name only. Regroup. Restore. Breathe. Ask for help if you can, in your circumstances.

END_OF_DOCUMENT_TOKEN_TO_BE_REPLACED

It’s that time of year when professors like myself are editing, updating, or drafting syllabi for the coming fall semester here in Canada (and as I understand, the fall term is underway for many of my American peers!). As I head into my third year as an anthropology professor in Ottawa, Canada, I’ve been thinking hard about what it means to enact anthropology, pedagogy, and co-thinking in this particular place and time. I live, work, and teach in unceded and unsurrendered Algonquin territory. In fact, Ottawa, Canada’s national capital, sits in entirely unceded Indigenous land. What does that mean? Well, our House of Parliament sits on land for which no treaty was ever signed or negotiated. This creates complex and urgent realities between a) the Algonquin communities whose laws and histories are inextricably bound to this city in the heart of the Ottawa River watershed and b) the broader Canadian nation-state (and its myriad institutions). END_OF_DOCUMENT_TOKEN_TO_BE_REPLACED

Today is a tough day for many Indigenous people in Canada. The Truth and Reconciliation Commission released its findings from its years of work collecting testimony from survivors of the Indian Residential School system in Canada.

In a way, I am thankful that I get to finish my guest blog post with Savage Minds on a day that is so important for Indigenous people across Canada. And I am thankful I get to sign off by sharing an interview with a brilliant Indigenous scholar, Jenny Davis.

END_OF_DOCUMENT_TOKEN_TO_BE_REPLACED

This post is the second last in my series as a guest blogger for Savage Minds. Tomorrow I will post the final interview and wrap up my time here.

Below is a conversation between Kyle Mays Wabinaw (@mays_kyle) and I about his work as a historian, and his experiences as a Black and Indigenous person in the American academy. I’m incredibly grateful to Kyle for taking the time to answer my questions, as he has been very busy of late–I’m very excited to see the work he produces as he takes up his new position as a post-doc at UNC Chapel-Hill. Hiy-hiy, Kyle, for sharing your insights and experiences with me.

END_OF_DOCUMENT_TOKEN_TO_BE_REPLACED

As promised, I have an interview to share with you. This is a conversation between my friend and colleague Catherine Clune-Taylor, a doctoral candidate in Philosophy at the University of Alberta. Catherine, who also goes by the name Cato, and I have discussed our experiences in the academy with one another over the last few weeks. The following interview is a snapshot of the topics our conversations have covered. Through our ongoing dialogue, we interrogate the experiences of being black (Cato) and/or Indigenous (me) within disciplines that act as ‘white public space’ (Brodkin et al. 2011), and how that has shaped our praxis and writing and thinking. In this interview, Cato situates her work and articulates her vision of what an accountable academy can look like, and how we build that in a concrete way.

END_OF_DOCUMENT_TOKEN_TO_BE_REPLACED

Just a quick update to share an example of a PhD student directly challenging the ways in which we evaluate thinking within the academy–enacting Indigenous pedagogy, language and legal orders in a tangible way within his discipline. Nisga’a architect Patrick Stewart recently submitted a dissertation for his PhD in architecture at the University of British Columbia without punctuation.

END_OF_DOCUMENT_TOKEN_TO_BE_REPLACED

I think about the ‘we’ and ‘them’ of anthropology quite frequently. I have always found the royal ‘we’ a bit of funny notion. Who is included in this ‘we’? Such a simple word, all of two letters, and yet it has an ambivalent presence. It can be an act of loving kinship—we are here together. We look out for one another. Or it can be an act of violence through the denial of difference: ‘we’ are just like you, so your concerns are invalid. We know what’s best. We are not amused.

END_OF_DOCUMENT_TOKEN_TO_BE_REPLACED

In October 2014, I wrote a piece about citation practices and the relationships between Indigenous people, Indigenous scholars and contemporary anthropology more broadly. The piece went viral and has received well over 28,000 hits from around the world since I posted it. I never thought that my own personal reflections on what it is to be Indigenous and working within Anthropology would garner that much attention.

Since writing the piece I have returned to Canada, where I currently am living and writing within unceded Katzie First Nation territory along the Lower Pitt River, which snakes its way south from Pitt Lake towards from the mighty Fraser River in the province known by the profoundly settler-colonial name British Columbia. Within this territory, much like my home territory in amiskwaciwâskahikan (Edmonton, Alberta, Canada), live fish. Many fish. Specifically: sturgeon, salmon, trout and many others.

END_OF_DOCUMENT_TOKEN_TO_BE_REPLACED

These are, respectively, the nehiyawewin and Michif greetings of my home territory.  I grew up in amiskwaciwâskahikan/pêhonan in Treaty Six territory in central Alberta, also known by the colonial name Edmonton. Michif and nehiyawewin are two of several Indigenous languages spoken in my hometown, which is the traditional territory of Cree, Blackfoot, Saulteaux, Dene, Nakoda and Métis peoples. I am finishing my PhD in Social Anthropology at the University of Aberdeen and will begin a position at Carleton University in Ottawa, Canada in July.