If you’re just starting out in anthropology, let me do you a favor. I want to point out three items that are NOT resources for learning more about anthropology, though they may seem like it at first glance. 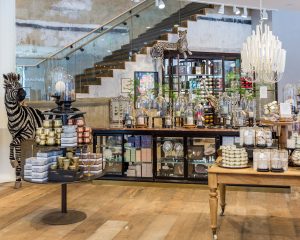 1. Anthropologie. This is obvious for many of our readers: Anthropologie is a clothing and home décor retailer in the United States, UK, Germany, and France – not a store where you can find the course readings or cool skull things for your office. In fact, there is no clear connection between what Anthropologie sells and what anthropology is. I’ve heard stories of anthropologists shopping at Anthropologie who have tried to strike up conversation with employees about anthropology, only to be met with blank stares. Furthermore, Anthropologie’s ridiculously high prices for frivolous products are totally counter to anthropology’s long relationship with social justice and political economy. Instead: If you need anthropology-related goods, try patronizing your local bookstore or buy from the local artists wherever you do your research. 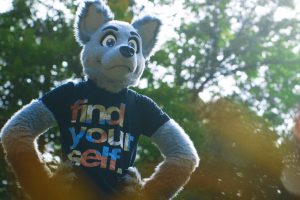 2. AnthroCon. This one is a little less obvious. In college, I had a colleague excitedly announce in our student anthropology club meeting that AnthroCon would be in Pittsburgh that year. Having never heard of it, I googled right away to discover something I was not expecting: AnthroCon is furry convention and it takes place in Pittsburgh every year. You may wonder, “What does that even mean?” From Wikipedia: The furry fandom is a subculture interested in fictional anthropomorphic animal characters with human personalities and characteristics. Examples of anthropomorphic attributes include exhibiting human intelligence and facial expressions, the ability to speak, walk on two legs, and wear clothes. Furry fandom is also used to refer to the community of people who gather on the Internet and at furry conventions. Furries read and write fan-fiction or even develop their own “fursonas” (fur + persona) and dress up in costume. While I’m not sure if it really is a true characteristic of the community, there is a strong stereotype of furries that participants have a sexual interest in their activities, and there are plenty of sexualized animal illustrations in a quick Google Images search (which is NSFW) that confirm that bias. Anyway, we get to “AnthroCon” because furry fandom revolves around anthropomorphic animals and furries are also called “anthros.” While I’ve never been to an AnthroCon, I can almost certainly guarantee that they you won’t find a book room with killer discounts on Duke University Press publications and DER films. (Email me if I’m wrong.) Instead: If you want to hang out with anthropologists and familiarize yourself with the latest news, hit up a regional or national anthropology conference or area studies conference!

3. r/Anthropology. r/Anthropology is a subreddit (or community on Reddit) that is ostensibly about anthropology. A cursory glance at the topics shows that the community seems more occupied with current events in popular science that are related to archaeology, paleoanthropology, and human biology and evolution than they are about the discussions going on within. There are some cultural and medical anthropology conversations going on, but not a lot since the community relies heavily upon popular media. I thought it’d be a good idea to promote Savannah Martin’s latest guest blog, “Bidding ‘bon voyage’ to La pensée sauvage” there. Not surprisingly, most of the comments were not far removed from some of those gems in the comments here on Anthrodendum or on Facebook or Twitter: I was treated to the completely uninteresting and unoriginal reminder that Lévi-Strauss meant this thing, not that thing, and it’s all just a pun that I don’t understand (despite my conversational fluency in French), as if no one here at the blog knew these exciting insights into the true meaning of “Savage Minds.” What did shock me about r/Anthropology was that as soon as I reminded Savannah’s critics that Whiteness and being White plays a huge role in how we view the world – and more specifically, that many White anthropologists who are confronted with the possibility of accidentally hurting People of Color seem to default to a defensive stance bound up in their Whiteness rather than a culturally relative and sensitive position that we learn in anthropology – I was called a racist. One person even claimed that, as a test, I should substitute all of the times I used “Whiteness” with “Blackness,” and sure enough I would realize I was being a racist. Huh?

Racism – you may not know – is a combination of racial prejudice and institutional power, and therefore it is largely understood in the social sciences that one cannot be racist against White people. That someone on r/Anthropology claimed the opposite, and that no one challenged their position (though many supported them) tells me that these particular community members are not familiar with what I had believed to be a very Anthro 101 understanding of race and racism. At that moment, I realized that if I wanted to carry on, I would be investing a great deal of time and energy into attempting to educate people that seemed to have a very fixed definition of racism for themselves – I opted out. I’ve gone on plenty of these noble quests before and I won’t dissuade anyone else from doing it, but I just don’t have it in me right now.

I don’t like to make sweeping generalizations right off the bat, and so I thought perhaps that this was just one bad experience. I returned the next day to the subreddit to find two new topics up for discussion. “Are White people a different species than everyone else (because of their Neanderthal DNA)?” was is thankfully deleted and “Can anyone tell me why [A]frican genetics are so dominant?” In the latter topic, the author wants to know why Black-White biracial kids look more Black than White, a question based on deeply undereducated misunderstanding of molecular and population genetics and with all the makes of a springboard for an argument against miscegenation and for eugenics. They might as well be asking, “Why are Black genes so aggressive and threatening? 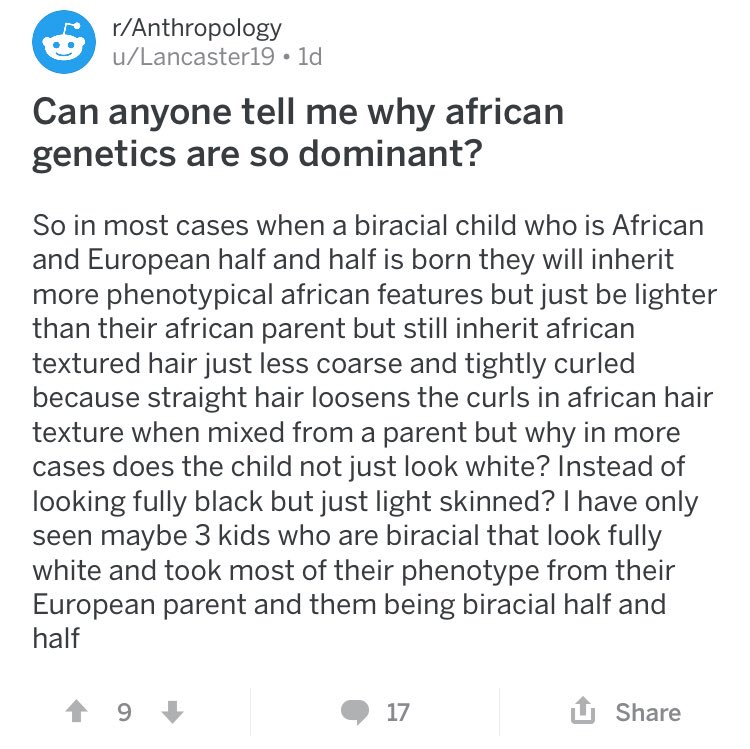 Basically, my short experience on r/Anthropology leads me to believe that it is what would happen if you took all the horrible things you’ve heard about Reddit and turned it loose with only an introductory anthropology course under its belt. Again, this was a fleeting experience, and I could be wrong, but then again, I don’t know a single person in my admittedly huge professional network that spends any time (or significant time, at least) on r/Anthropology, and no one has spoken up to say I should give it another chance. I could be wrong, but I will say there are definitely better places to find community. Instead: If you’re looking for an internet community of anthropologists, you should probably stick to Facebook and Twitter.

So unless you’re looking for overpriced home goods, Tony the Tiger costumes, or an internet forum that would make Madison Grant proud, it’s best to avoid these places.