Continuing themes raised in my previous post, I’d like to present another riddle of rationalization and reflect on its meaning and impact.

As part of the planning process for the building project in which I’m involved, I joined my colleagues in various fieldtrips to other institutions. In the course of those travels I saw and heard about many odd cases in which codes of various sorts, complicated by their local interpretation, had a significant role in shaping architectural decisions. The example that I wish to consider could have happened anywhere, so its precise location doesn’t matter. All you need to know is that the buildings in question are located at an American institution of higher education.

The institution built an addition that links two late 19th-century buildings. At the time of construction, local authorities said that only two of the four entrances on one side of the complex had to meet the accessibility standards of the Americans with Disabilities Act (ADA). Since the average distance between the entries is only slightly more than 50 feet, this seemed sensible. Adding two more large ramps would raise costs significantly and, more important, deface the historic buildings. (Although they are historic, they aren’t on the state or federal historic register, an issue I’ll get to in a second.)

A couple of years after the building was opened, though, the local code official, apparently under pressure from higher-ups elsewhere, reversed the earlier decision. Now all four doors either had to be made ADA-compliant or the two non-compliant ones had to be decommissioned as public entries.

The institution, like virtually all American colleges and universities, is committed to the letter and spirit of the ADA. But absent a budget for the addition of two substantial concrete ramps and a willingness to compromise the look of handsome old buildings, the institution removed exterior handles from the doors in question. END_OF_DOCUMENT_TOKEN_TO_BE_REPLACED 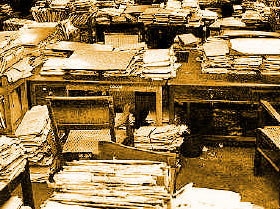 I’m grateful for Strong’s post calling attention to David Graeber’s recent Malinowski Lecture on bureaucracy and power. These issues have been much on my mind in recent months.

Some personal background: One of the challenges (and very occasionally, pleasures) of working at a small college is that faculty members are often given administrative tasks that transcend the usual chairing of departments and programs. Where I teach, most of the top administrative officers are working academics, a situation that sets a tone for the rest of the faculty. Since 1998, I have been involved in a large building project that by 2012 will have encompassed the construction of three major buildings–two faculty office buildings and a new college library–and the remaking of a core part of the campus. I share chairing duties with the College Librarian, but in reality my co-chair and I have little latitude to make key decisions. Most of the time, we herd cats and serve as institutional memory for a multi-million dollar project that, when completed, will have taken nearly 15 years from initial conceptualization to the ritual cutting of the last ribbon.

For an anthropologist, architecture and site-planning are a real-world test of social analysis–it is, as they say, where the rubber meets the road. Architecture on college and university campuses is inevitably a form of social engineering, with all the possibilities (and delusions) that this entails. But even the most laudable goals–e.g, “creating a lively environment that facilitates teaching and learning”–must be weighed against such factors as cost, aesthetics, building codes, and unknown but presumably radical changes in IT in the coming decades. Fortunately, we’ve been working with a team of gifted architects with considerable experience in how buildings and people interact.

So where’s the anthropology in this? To design and construct buildings today is to wrestle with all the contradictions of modernity–in particular, what is often called the “irrationality of rationality” as manifested in risk-management, “accountability,” “due diligence,” and bureaucratic proceduralism. END_OF_DOCUMENT_TOKEN_TO_BE_REPLACED 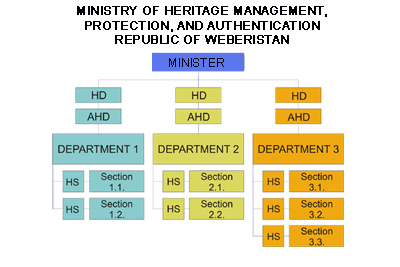 A striking development that has come out of the last decade’s concern with indigenous IPR and, more broadly, with the world’s mad scramble for rules of cultural ownership is the rise of global initiatives to identify and protect anything defined as “heritage.” UNESCO is the single biggest player here, but UNESCO discussions have spawned new bureaucracies in many parts of the world.

Some experts close to the process see this as a good thing. Their argument is largely a pragmatic one: at least the world is talking about this stuff and finally taking measures to protect heritage from IP piracy. If you want to get the general flavor of this, click here to read about South Korea’s current efforts to define and preserve whatever it defines as its cultural heritage.

Although I’ve met many people involved with heritage protection and generally find them smart and motivated by the best of intentions, I’m a heritage protection skeptic, which puts me in good company. For a bracing critique full of tart humor, check out David Lowenthal’s article “Heritage Wars,” published in a UK online magazine last year. Other recent contributions to the skeptic’s position include Rob Albro’s 2005 essay “Making Cultural Policy and Confounding Cultural Diversity,” as well as a recent essay by Dorothy Noyes called “The Judgment of Solomon: Global Protections for Tradition and the Problem of Community Ownership,” accessible here.
END_OF_DOCUMENT_TOKEN_TO_BE_REPLACED 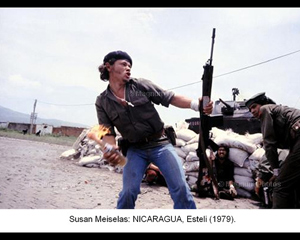 If you’re interested in how images move and morph in a digitally linked world, check out a recent essay in Harper’s about “Molotov Man,” who was born in a photograph taken by Susan Meiselas in revolutionary Nicaragua in 1979. (Work by Meiselas can be seen in the website of the photo agency Magnum.) It was subsequently appropriated for artistic and political purposes in Nicaragua and beyond.

Molotov man is the subject of the Harper’s article “On the Rights of Molotov Man:
Appropriation and the Art of Context,” by Susan Meiselas and Joy Garnett, published in the February issue. It also figures in the multimedia record of an NYU conference, Comedies of Fair U$e,” held in April 2006. The conference attracted such fair-use heavyweights as James Boyle, Lawrence Lessig, Siva Vaidhyanathan, and Jonathan Lethem.

Does anyone know of specific indigenous images that are this well-traveled?

A curious development in the struggle to protect traditional knowledge (TK) from unwanted exploitation by outsiders is a strategy called “defensive publishing.” This largely applies to the realm of the patent, not copyright or trademark, because patents are supposed to be granted only for processes, substances, or devices that are truly novel. (There are other criteria as well, but they needn’t concern us here).

If you can prove that something isn’t novel, that it has been known and used for a long time, then it can’t be patented.

To defend traditional knowledge from exploitative patenting, then, there are two basic and fundamentally opposed choices under existing law: define it as a trade secret or protect it in plain view. The goal of the latter is to establish that patent applicants who make use of this information fail to meet the novelty standard.

Although the trade-secrets approach sounds promising, and some legal scholars argue that it’s the way to go for the protection of traditional IPR, it has certain problems. For one thing, a lot of TK isn’t especially secret. It is, almost by definition, in wide circulation within a society. Trade-secrets laws typically say that anyone who can duplicate trade secrets independently–say, through reverse engineering–is free to use them. Still, one can argue that the Aboriginal “keeping-places” emerging in Australia, repositories for TK that have strict rules of access, follow something like a trade-secrets approach. To a more limited extent, protocols for the use of Native American TK in American archives are moving in a similar direction.

The plain-view approach has been adopted in a few important cases–notably, that of Ayurveda, which is documented by the Indian government in the Traditional Knowledge Digital Library. (Site is publicly accessible but requires a simple registration.) The idea is to establish “prior art” and therefore refute claims of novelty.

Yet as the sociologist Sita Reddy has argued in a provocative essay, “Making Heritage Legible,” just published in the International Journal of Cultural Property, the conversion of Ayurvedic tradition into a database generates all manner of contradictions and conflicts.
END_OF_DOCUMENT_TOKEN_TO_BE_REPLACED

I’m flattered to have been given a guest-worker permit at Savage Minds. I was invited to comment especially on the intersection of anthropology and intellectual/cultural property. But since my work is now moving in new and different directions, I’ll also have a few posts on other issues before management yanks my login rights toward the end of the month.

The more I track anthropological work in intellectual property rights (IPR), the more it seems that as a discipline we’ve leveraged ourselves into a strange and contradictory place. On the one hand, many of us enthusiastically support the idea of open access (see Rex’s recent post, for example, or check out the website of the Alexandria Archive Institute). On the other, anthropologists are collaborating with indigenous organizations to create more robust controls over access to indigenous knowledge in the interest of discouraging various forms of cultural appropriation (often described as creating a form of “cultural copyright”). Those controls are likely to have a profound impact on how and what we publish–they already have, in fact–and even on the accessibility of work published decades in the past.

In theory, the two opposed goals are not irreconcilable. In practice, I’m not so sure. After reading Jeffrey Toobin’s recent New Yorker article about Google’s ongoing efforts to upload millions of books to the web, I trolled Google Book Search (still way in beta) and was blown away. I typed in “Moyobamba,” the name of a Peruvian town not far from where I did fieldwork in the 1970s and 80s, and immediately found a half dozen travelers’ descriptions of the town from the nineteenth and twentieth centuries. OK, most of these works are obscure for good reasons, but I might never have encountered them otherwise. Once every ethnography is available to everyone with a computer, what chance do indigenous people have of limiting access to information increasingly defined by them as “sacred” or “sensitive”?