If you’ve been living under a rock for the past week you might not have noticed that the NCAA men’s basketball tournament is underway. My own fandom encompasses many different kinds of sports each for different reasons, but far and away the men’s tournament is the most entertaining televised event of the year. We’ll just have to set aside the irony of recognizing the problematic nature of elite-level college sports while enjoying it as faculty. Sorry! That’s a whole other post. Here I want to bring up a semiotic curiosity and get your feedback.

Over the course of the basketball season the teams play each other and develop reputations for their skill (or lack thereof), and the culmination of the season is a tournament in which only select teams are invited to play. There’s a lot of drama leading up to the tournament as a convoluted selection process decides which teams will play and in what order they will meet. As the anticipation builds and the media hype machine goes into overdrive we often hear the basketball tournament marketed as “the Dance” or “the Big Dance.” In this narrative the selection process is likened to a courtship ritual, with the teams as available women each of whom wants to make herself appear as desirable as possible in order to draw the most attention from suitors.

The selection process results in a numerical ranking for each team that represents their quality. The contest begins by pitting the weakest against the strongest. In theory this should give the strongest teams the best chance for advancing, but every year their are surprising upsets in which the underdog beats a heavily favored team.

If an underdog wins twice in row it is said to be a “Cinderella.” In this well known folktale, Cinderella, a girl in a structurally disadvantaged position in her family, undergoes a transformation in which she is revealed to be more beautiful and powerful than her mother (and sisters) who had previously tormented her. In the Disney version of this tale, the version most popular among young people in America, Cinderella goes to a dance with her identity masked and while she’s there she is courted by a Prince as her sisters and mother look on powerless to stop her.
END_OF_DOCUMENT_TOKEN_TO_BE_REPLACED

Jeremy Lin is the latest basketball sensation. Sports usually isn’t my beat, but I trust Nate Silver to do the statistics and he says Jeremy Lin’s recent success is no fluke. What I find interesting is how everyone seems to want to claim a piece of Lin: nerds, Christians, asian-Americans, Chinese, Taiwanese, etc. Let’s take these one by one, starting with nerds.

The New Yorker describes how Lin, a Harvard graduate, and Landry Fields “a Knicks guard from Stanford, have developed a handshake: put on spectacles, flip through a textbook—Organic Team Chemistry, we presume—take the glasses off, and stick ‘em in your pocket.” You can see this ritual here:

It used to be, before the GI Bill radically changed American higher education after World War Two, that it was common for the top athletes to come from the top schools. Now I believe it is more the exception than the rule. END_OF_DOCUMENT_TOKEN_TO_BE_REPLACED 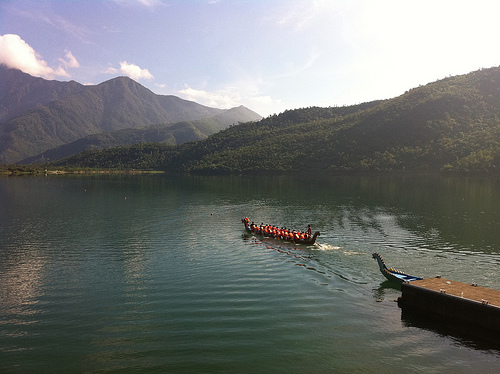 Here in Taiwan it’s time for the annual Dragon Boat Festival (Duānwǔ Jié 端午節), which also happens to be a school holiday. The traditional story of this festival is well summarized by Wikipedia:

The best-known traditional story holds that the festival commemorates the death of poet Qu Yuan (Chinese: 屈原) (c. 340 BCE – 278 BCE) of the ancient state of Chu, in the Warring States Period of the Zhou Dynasty. A descendant of the Chu royal house, Qu served in high offices. However, when the king decided to ally with the increasingly powerful state of Qin, Qu was banished for opposing the alliance. Qu Yuan was accused of treason. During his exile, Qu Yuan wrote a great deal of poetry, for which he is now remembered. Twenty-eight years later, Qin conquered the capital of Chu. In despair, Qu Yuan committed suicide by drowning himself in the Miluo River on the fifth day of the fifth lunar month.

This is the version of the story which most Taiwanese learn in school, but the truth is much more interesting. END_OF_DOCUMENT_TOKEN_TO_BE_REPLACED