Jeremy Lin is the latest basketball sensation. Sports usually isn’t my beat, but I trust Nate Silver to do the statistics and he says Jeremy Lin’s recent success is no fluke. What I find interesting is how everyone seems to want to claim a piece of Lin: nerds, Christians, asian-Americans, Chinese, Taiwanese, etc. Let’s take these one by one, starting with nerds.

The New Yorker describes how Lin, a Harvard graduate, and Landry Fields “a Knicks guard from Stanford, have developed a handshake: put on spectacles, flip through a textbook—Organic Team Chemistry, we presume—take the glasses off, and stick ‘em in your pocket.” You can see this ritual here:

It used to be, before the GI Bill radically changed American higher education after World War Two, that it was common for the top athletes to come from the top schools. Now I believe it is more the exception than the rule.

The second group to lay claim to Lin are Christians, as seen in this New York Times piece:

From talking to people who knew him through the Harvard-Radcliffe Asian American Christian Fellowship, and watching his interviews, I have the sense that his is a quieter, potentially less polarizing but no less devout style of faith.

What does becoming American have to do with becoming religious? Many immigrants become more religious after coming to the United States. Taiwanese are no different. Like many Asian immigrants to the United States, Taiwanese frequently convert to Christianity after immigrating. But Americanization is more than simply a process of Christianization. Most Taiwanese American Buddhists also say they converted only after arriving in the United States even though Buddhism is a part of Taiwan’s dominant religion. By examining the experiences of Christian and Buddhist Taiwanese Americans, Getting Saved in America tells “a story of how people become religious by becoming American, and how people become American by becoming religious.”

About the Taiwanese bit, you really don’t need to look beyond NMA, the famous purveyors of Taiwanese animated news. There is no doubt that Lin’s Taiwaneseness is front-and-center in their take on the story, which ends with him throwing flaming basketballs at Yao Ming, who is standing in front of a PRC flag, and then cuts to Lin in front of the ROC flag.

This brings to mind the story of Michael Chang whose parents “grew up in Taiwan (though were born elsewhere) and were educated in the United States, where they met.” Also a devout Christian, Chang was similarly claimed as a hero by Taiwan. I can’t find any references to it on Google, but I believe he once caused a small storm by saying he was American, not Chinese. That didn’t stop anyone, and I see on Google that he later became involved in promoting Tennis in China. (There is also this Slate piece about how Chang “Chang didn’t defy Chinese stereotypes; he simply ushered them into the arena. He was hardworking, intelligent, humble, forever prepubescent.”)

From a Taiwanese perspective, it is notable that Lin’s Taiwaneseness is mentioned in a number of news stories, as previously he would have just been called Chinese-American. Part of this is due to a push by Taiwanese-American organizations to have people write in “Taiwanese” on the 2010 census. But the more generic Asian-American is also quite ubiquitous. I have no idea how Lin views his Taiwanese identity, but I do know that he is likely to remain front page news here for as long as he’s scoring points.

UPDATE: Two new links. First is a WSJ article: China, Taiwan Both Lay Claim to Jeremy Lin. And the second is the “Racial Draft” skit from thw Chappelle show (although this may not stay up on YouTube for long).

UPDATE: The NY Times with a piece focusing on China’s claim to Lin (through his mother’s family). More links from Michael Turton.

UPDATE: More links from James Fallows, including a link to an article remembering “the days when basketball was considered a Jewish sport.” 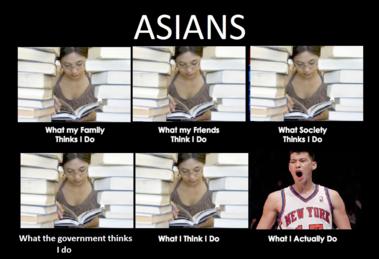