This post is part of this month’s analog/digital series and the second post­ discussing my work as an archaeological illustrator in relation to analogue and digital media. In the previous post I outlined my mostly analogue workflow with some digital skeuomorphs and explored the differences between illustration and 3D modeling. Here I’d like to share some ways I’ve recently expanded my use of the digital in my workflow and explored a constructive interplay between the digital and analogue.

I am the site illustrator for Çatalhöyük, a Neolithic archaeological site in Turkey. I started working there in 1999 as an archaeobotanist, and since 2007 I’ve been the project’s illustrator. Every summer I spend about two months drawing artifacts and recording on-site features. Over the years I’ve seen the project transition from entirely analogue recording to a mix of digital and analogue, until it has become almost entirely digital in some trenches. At this point the project employs tablets, laser scanners, and even drones. Dr. Maurizio Forte’s team from Duke University and Dr. Nicoló Dell’Unto from Lund University have spent the last several years testing these digital technologies on site. Until recently my work has mostly been unaffected by this transition to digital, I’ve carried on with my analogue workflow on a parallel track (see my earlier post for some advantages to analogue media in illustration). ­But over the last couple years several situations have arisen where I have had to re-evaluate my approach and consider integrating some of these new digital methods.

For example, this past summer I was tasked with illustrating a large, fragile lump of molded plaster in the shape of a head with painted ochre designs. I sat in front of the head with all my drawing tools laid out, picked up my pencil, and stopped. The plaster feature had already been 3D modeled by Dr. Dell’Unto and photographed by site photographer Jason Quinlan from every angle. What was my analogue pencil and paper drawing going to record that these other digital methods hadn’t already? Why illustrate?

END_OF_DOCUMENT_TOKEN_TO_BE_REPLACED 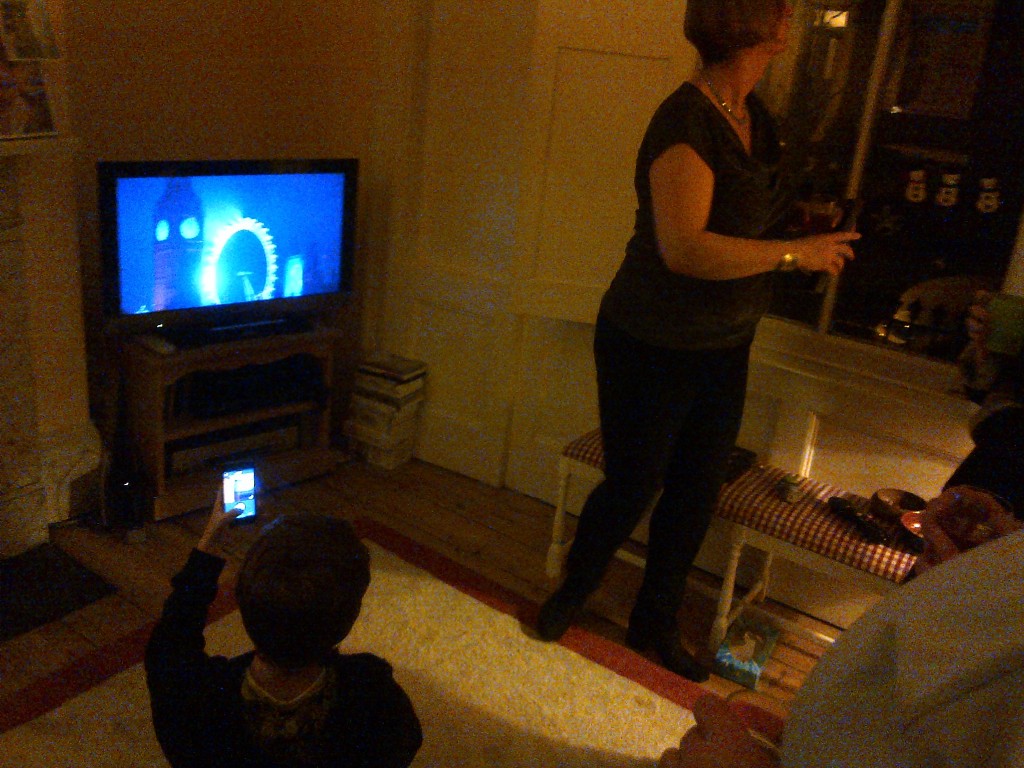 Post by Christine Finn, as part of the Analog/Digital series

The photo was taken at the dawn of the new year, 2016. It is a snapshot taken at a home in Islington, North London. I was using my old BlackBerry, which I prefer to a touch phone. It captures, albeit in a grainy style, a generational dynamic. The child is mediating the moment of Big Ben chiming, not just through he television, but capturing it on his smartphone. The woman, my generation, is peering through the window. She is about to open it to hear the fireworks of celebration over the Thames a short drive away. I am working constantly with the dance of technologies fading, disappearing, and resurging. And a quest for authenticity. This photo captures something of my own sense of time passing, through the filter of technology.

Christine Finn is a journalist, writer, and creative archaeologist. She has written and presented on computers as archaeology since 2000, when serendipity led her to San Jose, California. Her book, “Artifacts: an archaeologist’s year in Silicon Valley”, on the material culture of the dotcom boom and bust, was published by MIT Press in 2001, and is now an ebook. She is author the author of “Past Poetic: archaeology in the poetry of WB Yeats and Seamus Heaney (Duckworth) and her authorised biography of Jacquetta Hawkes, a 20 year literary excavation, will be published in the summer. She has also contributed to the Sunday Times, Guardian, Wired, BBC, and Edge.org. As an artist she has made site-specific works in the UK, Italy, and the US, and received seven Arts Council England funding awards. She is currently a Visiting Fellow in the Reuter Inst for the Study of Journalism at Oxford University.

I am an archaeological illustrator and in this post, as part of this month’s analog/digital series, I’d like to discuss my work in relation to analogue and digital media. My job includes recording on-site features, drawing artifacts, and creating reconstruction illustrations of architecture, people, and activities. I also help researchers think through their data and raise new questions during the illustration process. Until recently I would have considered my illustration practice wholly analogue. I feel most comfortable working with pencil, paint, and paper. When I first started producing archaeological illustrations (about 10 years ago), the only digital part of my workflow was at the end, scanning my hand drawn images and cleaning them up in Adobe Photoshop and Illustrator for eventual publication. The image below is an example of this process.

Since then, there has been a gradual creep of the digital into my workflow. I now continually switch back forth between analogue and digital methods when making an illustration. After an initial sketch by hand, I scan the image, then play with the composition digitally, perhaps print it out again and draw on top of my print, scan it again, etc. I continue this back-and-forth until I have a preliminary drawing that I am happy with and that incorporates any comments or corrections from my clients. I’ll then complete the final art in an analogue medium with digital details and final flourishes. This combination of analogue and digital production is fairly straightforward, a skeuomorph of strictly analogue processes.

END_OF_DOCUMENT_TOKEN_TO_BE_REPLACED 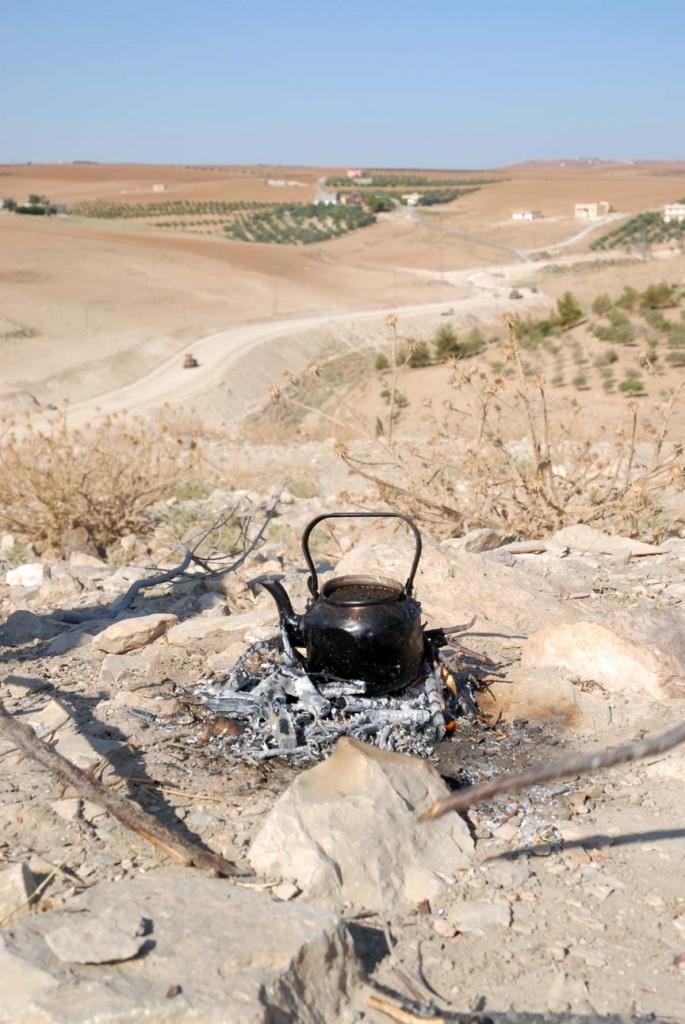 It was hot, but that was not unusual. We woke up at the first call to prayer to be on site at sunrise. I would trudge through the dimly-lit streets of the village, up to the ancient tell, and sit next to my trench until I had enough light to see my paperwork. The cut limestone went from dull gray, to a rosy pink, then that brief and magical moment called the golden hour, when the archaeology would become clear and beautifully lit and I would rush around trying to take the important photos of the day. Then the light would become hard, white-hot, and often over 100F. By lunchtime all of the crisp angles of the limestone would disappear into a smeary haze, hardly worth bothering with a camera. Photographs of people were impossible too—everyone was dusty, hot, irritable, half in shadow under hats, scarves.

I picked up my camera and climbed out of the Mamluk building I was excavating, on my way down the ancient tell of Dhiban and back up the neighboring tell of the modern town of Dhiban. As I walked between the Byzantine, Roman, Nabatean and Islamic piles of cut stone, a faint trace of smoke made me hesitate, then come off the winding goat path. Two of the Bani Hamida bedouin who worked with us on site were stoking a small fire on the tell. While making fires on the archaeology was certainly not encouraged, the local community had been using the tell to socialize for a long time. I greeted the men and they invited me to sit and have qahwa, a strong, hot, sweet, green coffee served in many of the local hospitality rituals and customs. I refused once, then twice, then looked over my shoulder at the vanishing backs of my fellow archaeologists, on their way to breakfast. Then I accepted a cup. But first, I pulled out my camera and snapped a photo.

END_OF_DOCUMENT_TOKEN_TO_BE_REPLACED

Archaeology has a long tradition of using visual representations to depict the past. For most of its history, images were done by hand and based on artistic skills and conventions. But the last fifteen years, we have witnessed 3D models take over archaeological visualization. It is interesting to note that while hand-drawn depictions tend to show human figures and seem to be associated with scenes of “daily life”, virtual reconstructions mostly show architectural remains and public spaces, usually devoid of people and objects. Yet, authors state that their intention is to represent the past.

My field of research is what we now call Virtual Archaeology, but I started investigating when we still talked about “VR applications in Archaeology”. I have seen it become mainstream and evolve; and I wonder why after almost twenty years of technological improvements and theoretical debate, virtual reconstructions are still empty. Especially in comparison with drawings. Do the virtual and the physical have implicitly different goals? Are they subject to different perceptions or expectations by researchers and/or audiences? Have they received different historical influences? Maybe technological capacities still play a role?

END_OF_DOCUMENT_TOKEN_TO_BE_REPLACED

This is the first in a series of posts, coordinated with Colleen Morgan, on the relations between analog and digital cultures. Over the next month, through the contributions of a variety of archaeologists, we will explore the concept of materiality in an age where the nature of ‘the material’ is rapidly shifting. How do physical materials and digital materials shape one another? How does experimentation with the digital rethink the dimensions of the analog, and vice versa? How, if at all, do we distinguish between one and the other – and is this even necessary (or possible) today? How have our understandings of ‘the real’ – of ‘things’ and ‘facts’ – of presence and the body – of aura and authenticity – been shifted by interactions between physical and digital materials?

As the premiere scholars of materiality, archaeologists are well-versed in the continuities between, and changes to, artifacts. Here, we probe their boundaries through discussion of our engagements at the intersections of the analog and the digital. I begin with some critical comments on mobile apps: oft enrolled in visitor experiences at archaeology and heritage sites, are these digital tools actually valuable?