“…in boxing as in conversation, in exchanges of honour as in matrimonial transactions, presupposes an opponent capable of preparing a riposte to a movement that has barely begun and who can thus be tricked into faulty anticipation.”1

In an effort to cut through a lot of hot air being blown on the internet I recently argued that race (and gender) is a “technology of power.” I would like to follow that up with an argument that belief is best understood as a set of social practices, not as an internally coherent ideological system. This is because a large number of seemingly well-intentioned people on my timeline are arguing something along the lines of “we shouldn’t let Islam of the hook for terrorism.” In my previous post I argued that we should endeavour to engage the best arguments that we disagree with, not those easiest to dismiss. This is one reason I haven’t engaged this particular argument before. At first blush it strikes me as little more than laughable “clash of civilizations” Islamophobia (not that Islamophobia is funny). However, some recent discussions have convinced me that there might be a more anthropological version of this argument which is worth a more serious discussion. This argument has two parts: (1) that we should take people’s ideas seriously, including those of violent extremists, and (2) that we should not erase difference by arguing that all forms of violent extremism are the same (i.e. by arguing that not all, or even most, violent extremists are Muslims). I think few anthropologists would take issue with either point, but in so doing we would still not end up in the same place as those making these arguments.

END_OF_DOCUMENT_TOKEN_TO_BE_REPLACED

If you hadn’t heard of Laura Ling, the journalist sentenced to 12 years of hard labor for illegally entering North Korea, at the time of my first upload to Savage Minds about her plight you probably have now. On the eve of her sentencing, June 3, Lisa Ling, sister to Laura and multi-network television journalist, after two months of US State Department recommended silence, was on almost every major American television network advocating for her sister’s release. In my first post, I wrote about the dangers of working as a journalist for Current TV, a small cable news network with a very limited amount of institutional cultural capital it could muster in case of an emergency. On June 14th, New York Times writer Brian Stelter furthered this idea and wrote about how new media journalism is exceedingly dangerous because small start-ups don’t have the sway of large ones. His point is oddly near to my own and if SM indeed has a reader at the NYT than I am hap 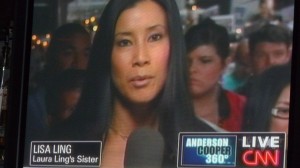 py to oblige Stelter’s creativity and I’ll accept the flattery with the imitation. Today, I will continue the analysis of this crisis in the direction of looking at the relationship between individual and institutional cultural capital.

I was at the first LA vigil on May 21 before Lisa Ling’s public involvement. There were seven people on a dog path along Venice beach. One person looked like Jason Schartzman. He wasn’t. He along with all others whorshipped at Laura’s church. At the second LA vigil at a swanky restaurant in Santa Monica I had to elbow through the valet, concerned beautiful people, television personalities, and cable news reporters to get my professionally premade “Save Laura” sign. After months of silence, when these media insiders wanted the attention it was instantaneous. I won’t say that this is an instance of media producer nepotism. It is a good story for ratings; a real news issue. We should campaign for the pardon of these two unfortunate journalists. However, the media blitzkreig explains much about the cultural capital and complicity of cultures of media production.

I want to think about individual cultural capital, namely Lisa Ling’s, and her use of that capital to advocate for the release of her sister, and how it relates to institutional cultural capital, namely the advocacy powers of American television networks. The play between institutional and individual cultural capital can be understood through the structure-agency dualism within the anthropological tool of practice theory. However, practice theory usually works within calculations of oppositionality and tensions. In the classic view, individuals, particularly activists, are in an antagonistic relationship with media institutions. The case of Lisa Ling and American news networks, on the contrary, consists of individual agency and institutional structuration overlapping. In the process, entertainment and activism synchronize. Let me explain.

There was a key moment, an event, that exposes the presence and strategic deployment of cultural capital in this case. Lisa Ling is a correspondent for CNN, National Geographic Channel, and ABC’s The View. Mitch Koss, who was with Ling and Lee in North Korea, is widely known to have been the mentor of Lisa and Laura Ling, as well as Anderson Cooper. These media insiders waited months to thumb threw their address books to get the numbers of Larry King, Anderson Cooper, and Matt Lauer (Today Show). With all due compassion to Laura and Lisa, it is important to note that in a world of increasingly edutainment-geared television news programming this is a “good” story complete with evil despots, nuclear weapons, and teary-eyed family members. Even without this engaging nonfiction narrative, I would argue, Lisa Ling would be able to get on every show, and have celebrity-dense, simultaneous vigils in several American cities coordinated with her television appearances.

What if Lisa wasn’t Laura’s sister? What is Al Gore hadn’t founded Current TV and weren’t involved? Would this issue had gotten on all major networks at primetime hours had Lisa not had these contacts and been so camera-ready and photogenic? These concerns could be somewhat tempered if we consider the class and cultural capital of the people who gain full-time employment in the creative industries. It isn’t Lisa’s ease and practice on camera which makes it possible or her connections, but a mix of these issues and more that constitutes her powerful cultural capital. While Current has branded their business as entrepreneurially democratizing media production and distribution to the masses, the people who are under the benefit packages and full-time salaries of these companies are unusually well-connected through family, elite schools, or other insider and backdoor operations.

With practice theory, we often conclude that agency is structured and the higher the agent gets within spirals of power the more structuration occurs. Activism, usually associated with individual agency, quickly is structured to death and transformed into spectacle. Strangely enough in the Ling situation, the individual and institutional cultural capital synchronize. This coordination usually happens only to elites. However, usually even to them, their political intentions are stripped in the pursuit of entertainment. This is not so in this case. Through personal favors, shared political concerns, and co-benefits in the economics of spectacle, the Ling family and major news networks coordinated to publicize the reprehensible situation of these journalists.

Also at the vigil for the first time were employees of Current TV, in my next blog I am going to investigate the political and capitalistic drive behind the censorship and denial by Current TV of this issue and the failed promise of the democratization of citizen journalism and participatory culture.