[This is an invited post by John Postill. John is a Vice-Chancellor’s Senior Research Fellow at RMIT University, in Melbourne. He is currently writing a book titled Hacker, Lawyer, Journalist, Spy: Freedom Technologists and Political Change in an Age of Protest. He blogs at media/anthropology.]

Two and a half years ago, TIME magazine declared 2011 to be The Year of the Protester. From the Arab Spring or Spain’s indignados to the Occupy movement, this was undoubtedly a year of political upheaval around the world.

But 2011 was also an important year for a new global vanguard of tech-minded citizens determined to bring about political change, often in connection with national crises. Let us call these citizens, at least for the time being, freedom technologists.

Consider, for instance, the loose network of freedom technologists who spearheaded the Tunisian uprising. On 28 November 2010, after long years of struggle under one of the world’s harshest regimes, the lawyer and blogger Riadh Guerfali created the site TuniLeaks. A WikiLeaks spin-off, this site released US diplomatic cables that were highly embarrassing to Ben Ali’s autocratic regime. These leaks helped to prepare the protest ground. The trigger came through the actions of another freedom technologist, veteran activist Ali Bouazizi, who recorded on his smartphone the self-immolation of his cousin Mohamed, a street vendor. He then shared the video via Facebook, where it was picked up by journalists from Al Jazeera – barred from entering Tunisia – and broadcast to the whole nation (and the rest of the Arab world). Al Jazeera’s freedom technologists relied on blogs and social media to bypass the official restrictions and report on the fast-moving events on the ground. When the government censored Facebook, the transnational online group Anonymous launched Operation Tunisia, carrying attacks against government websites via dial-up connections provided by Tunisian citizens.

END_OF_DOCUMENT_TOKEN_TO_BE_REPLACED

Last night over 300 students and demonstrators took over Taiwan’s Legislative Yuan in protest of a secret trade agreement with China. For some background and context over the protest I recommend reading Michael Turton’s excellent blog posts on the ECFA trade agreement. And there is also an English language live-blog of the protest for those who wish to follow the news as it develops. What I want to focus on here, however, is one image from that live blog: END_OF_DOCUMENT_TOKEN_TO_BE_REPLACED

in a circle we stand, breaths fogging, arms raised,

lie fragile under layers of tarp, blanket and winter night,

powerlessness and power war in the returned Gaze of the cops,

antipathy, anger, appreciation in the honks of passing cars,

(never) doubting a small group of people can change the world.

Occupy is on our minds. With the May issue of American Ethnologist featuring articles on Occupy, and the New York Times noting recent social science interest in the movement, Occupy seems back on the anthropological radar—just as it is dropping off many screens outside academia. While this may just be a symptom of the speed with which our research and publishing tends to move, I’d argue there’s a better reason why anthropologists are researching and writing on Occupy. Early on, we maybe all felt we knew what it was about: economic inequality, the bailout of the rich, the newly-homeless foreclosed-on middle class and a permanent protest of all this, starting with Zucotti Park. As Occupy encampments sprung up nationally, then internationally, then started to get closed down, many of us became less and less certain of what Occupy is really about—homeless issues? Direct democracy? The banking system, or capitalism in general? Reform or revolution? It’s difficult to get a read on Occupy, not only because the interests of ‘the ninety-nine percent’ seem so broad, but also because there are multiple ninety-nine percents, with each Occupy locality made up of local people working autonomously on local issues, as well as translocal ones they might share with the larger Occupy movement. Is it even a movement? Towards what? Even locally, the diversity of concerns, goals and people involved in Occupy make this a hard question to answer. END_OF_DOCUMENT_TOKEN_TO_BE_REPLACED 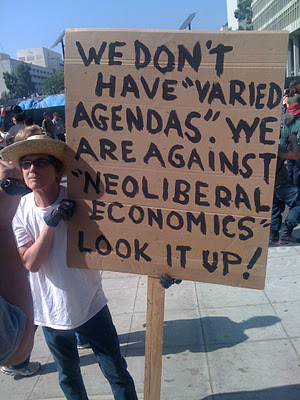