Savage Minds has gotten a lot more sophisticated than we were when we first started this blog almost ten years ago: We have guest bloggers, comp’d copies of books for our book reviews, and polished, seven thousand word interviews. And for the past couple of years we’ve also gotten an increased amount of accolades and recognition for some reason — mostly because we’ve been able to stay around longer than most.

But I feel that somewhere in this mix of newfound coordination and respectability we’ve gotten away a little bit from our origins as bloggers: entries that represent raw, immediate, thought. Entries that don’t figure out what their point is until the end, entries where the reader can feel you writing the piece, thinking alongside them.

That’s why I want to write something now about Ferguson, Michael Brown, and Darren Wilson even though I don’t know what I want to say. I only know that I want — need — to say something. END_OF_DOCUMENT_TOKEN_TO_BE_REPLACED

[This invited post is submitted by Discuss White Privilege, an anthropologist who has written extensively to refocus the academy’s critique of racism on itself. We respectfully ask that you review our Comments Policy before responding below. Thank you. –DP] 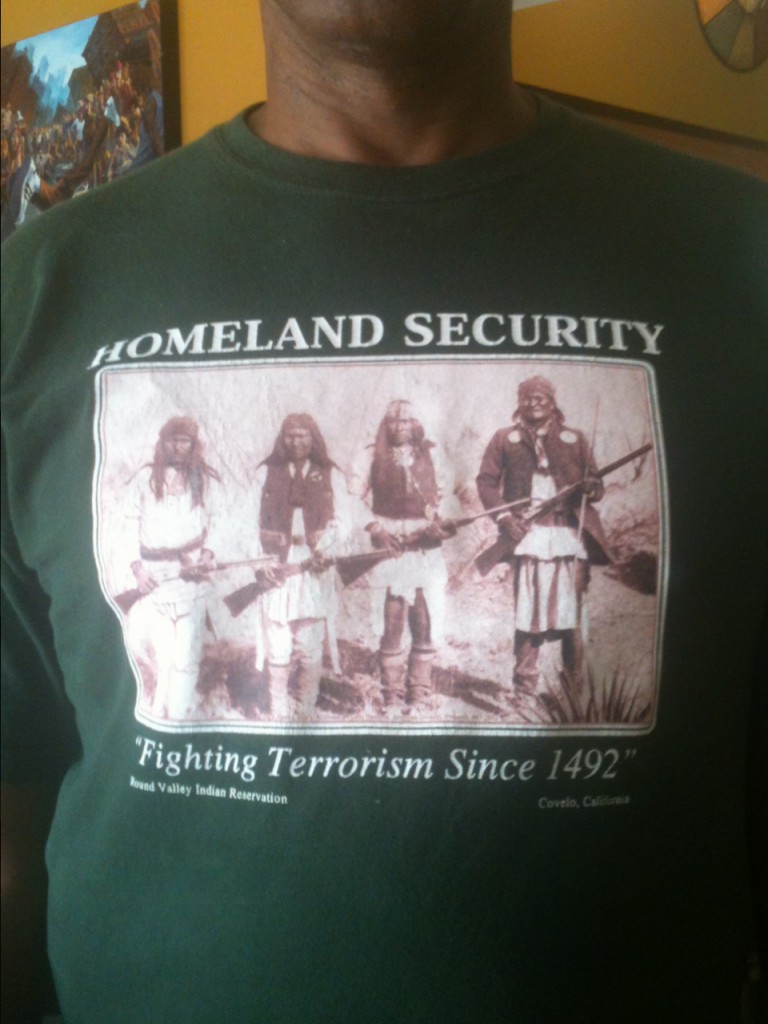 I just read the Michael Brown post [by Uzma Z. Rizvi] while in a Black hair salon in East Oakland, where my African friend is getting her hair done (behold: transnationalism, diaspora!). I found the shirt pictured [above], worn by an older Black man exiting the salon, poignant in light of the article mentioning the Department of Homeland Security, and Prof. Rizvi’s statement about the inescapablity of being judged on the color of one’s skin. I wonder how many White anthropologists, reading what Prof. Rizvi has written about racism and the absence of benefitting from White privilege, are really willing to reckon with the implications of this admission, or care about the deep pain of racism they know they will never experience, especially in relation to racial profiling and brutalization by police–which as Prof. Rizvi rightly notes, occurs, especially to bodies coded Black, regardless of education and class (though low socio-economic status clearly exacerbates such racist encounters and outcomes).

END_OF_DOCUMENT_TOKEN_TO_BE_REPLACED

Michael Brown was only 18 years old; he was unarmed and shot multiple times. I am exhausted by this news.

I cannot find words to express how such blatant racism makes a parent feel. It does not matter what we do for our children, it does not matter how educated we are, or what our politics are or really anything. What matters is the color of our skin. My heart goes out to Michael Brown’s parents and to parents world-wide who have the misfortune of having to contend with a child who has been shot for no reason other than for being different. In this case, it is not just about being different – it is about contending with a heritage of enslavement, the resultant race politics, and issues around police brutality in the United States. And this is not just about people of color: there is something unique, systemic, and targeted about the treatment of young African-American men in this country. And there is something awful about the violence of having to watch it happen over and over again on the television, on YouTube, in your Facebook feed, or on the blogs you read.

I remember watching Rodney King being repeatedly beaten by the LAPD in 1992. I was an undergraduate at the time, and I recall one of my professors likening the publicness of police brutality to the necessary publicness of lynching. Neither the image nor that statement have left my mind.

END_OF_DOCUMENT_TOKEN_TO_BE_REPLACED

As the community of Ferguson, Mo. reels from the shooting death of a young Black man, Michael Brown, at the hands of a White police officer it is worth paying attention to how the ensuing social drama that follows forwards conflicting interpretations by means of competing narratives. Shortly after Brown’s death a protest began to congeal, this was immediately met by police control.

The New York Times describes it:

At a candlelight vigil on Sunday evening, the heightened tensions between the police and the African-American community were on display. A crowd estimated in the thousands flooded the streets near the scene of the shooting, some of them chanting “No justice, no peace.” They were met by hundreds of police officers in riot gear, carrying rifles and shields, as well as K-9 units.

His death immediately sparked outrage, with protests and vigils beginning that day and showing no sign of abating on Monday. The reaction took a violent turn on Sunday, as some protesters began looting businesses in the Ferguson area over several hours, leaving a trail of broken glass and burned-out storefronts in their wake.

It sounds like there was a confrontation between protestors and police as well as loss of property later on. Is this a riot?
END_OF_DOCUMENT_TOKEN_TO_BE_REPLACED