Judith Butler has written that “resistance is the mobilization of vulnerability,” arguing that precariousness animates action. This suggests that rather than a state of docile subjugation, vulnerability is a source of empowerment. A particularly revealing example of this relationship between power and vulnerability is evidenced in the current status of federal climate science data. This data is increasingly vulnerable, as it is now maintained by an administration that has openly disavowed its credibility. At the same time, its vulnerability is directly tied to the potential power it wields in upsetting the authority and legitimacy of this administration. The power and vulnerability of climate data are positively correlated.

On its first day in office, the incoming administration ordered all mention of climate change removed from the official White House website. This, and the new president’s vow to eliminate Obama-era environmental policies, suggest a broad mistrust of science (climate science particularly) among the executive branch and its supporters. Suspecting that this could endanger decades of accumulated scientific data and research, UPenn’s Environmental Humanities program and Penn Libraries have initiated the DataRefuge project (#DataRefuge, @DataRefuge), facilitating a series of DataRescue events around the country designed to ensure that federal climate and environmental data remain publicly available under the current administration – a clear illustration of resistance stemming from the mobilization of vulnerability.

The following is an email conversation with one of the initiative’s organizers, Patricia Kim (@lowerendtheory) – Ph.D. candidate in Art History and Program Coordinator and Graduate Fellow at the Penn Program in Environmental Humanities (PPEH).

END_OF_DOCUMENT_TOKEN_TO_BE_REPLACED

One morning, chasing down a lead about research on plant memory from an article published in The Economist, I ended up at the journal Oecologia. This trajectory is increasingly familiar: a news source renders a popular account of life science research, and, trying to learn more, I end up at the academic source. The table of contents quickly overwhelmed me, though, and provoked me to stop for a moment and take stock of what I look for or find interesting in journals on genetics, biology, and botany.

Working on race, I initially began reading science journals as a way to keep up with claims and counterclaims in the polemics over its social construction. But as my focus shifted from people to plants (still keyed in on race), and as I developed an ethnographic project on biodiversity research, I began reading the journal articles to better understand what these plant scientists are up to. Along the way, the items in these reports (concepts, techniques, analytics) shifted, in my view, from socially constructed artifacts to crucial means for comprehending the very subjects that interest my ethnographic subjects. Now my approach to cultural analysis is changing. END_OF_DOCUMENT_TOKEN_TO_BE_REPLACED

After the rekindled debate over anthropology’s moral core, the erudite discussion about the politics of recognition, and the fascinating report on the genealogy of racial categories, here is a bit of fun.

Among the pokemonized philosophers are Decartes, Nietzsche, Kant, Rousseau, and Thoreau. 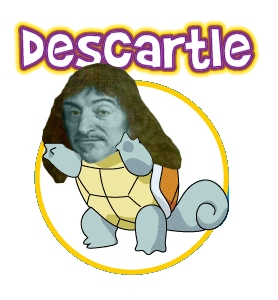 These philosophomons may remind SM readers of the caricatures of animals as humans printed in our namesake book, Claude Levi-Strauss’s Savage Mind. In it he explores “the totemic logic of classification” and looks at how totems line up with social categories in a given community.

I wonder if the creator of these philosomons had in mind of trying to match philosophical temperament of the thinkers to the structural position of the creatures in the pokemon pantheon. Decartes is a bit slow in moving but very powerful like a Squirtle, and Aquinus, as Aquinix, I guess is huge, rocky, and earthen like an Onix.

Anyway these humanized animals (or the other way around?) bring Levi-Strauss to a discussion about individual names, in which he stretches the Saussurean theory of signs to its very limit: that proper names, even of individuals like Decartes or Nietzsche, has inherited the the way “primitive” classificatory systems work. His argument I think prefigures that of Barthes and Foucault who both in different ways ring the death knell of “the author.”

Here is what Levi-Strauss says:

Insofar as [individual names] derive from a paradigmatic set, proper names thus form the fringe of a general system of classification: they are both its extention and its limit. When they come on to the state the curtain rises for the last act of the logical performance. But the length of the play and the number of acts are a matter of the civilization, not of the language. The more or less ‘proper’ nature of names is not intrinsically determinable nor can it be discovered just by comparing them with the other words in the language. It depends on the point at which a society declares its work of classifying to be complete. To say that a name is perceived as a proper name is to say that it is assigned to a level beyond which no classification is requisite, not absolutely but within a determinate cultural system. Proper names always remain on the margins of classification. (215)

I had always been puzzled by this passage, because he seems to want to go in opposite directions. Persons (especially famous ones) are like totems in that both enjoy a special “beyond compare” status yet they have to be somehow classified so that the individual becomes “proper,” that is, to gain some sort of a proper-ness and become a sacred symbol. Yet this kind of having to want both ways has, at least for me, some frightening consequences: the only kind of society that “declares its work of classifying to be complete” would be a totalitarian one with a cultural-nationalist bent.

Perhaps this gloomy conclusion about the fallen state of our civilization is what Levi-Strauss was pointint to.

So in the spirit of bricolage and savage thinking, and in the hopes of bringing some light-heartedness to the structural weight of classificatory systems, here is my first anthropomon, called Levisprout.

Levisprout is like a Bellsprout, except instead of the vine whip he lashes his opponents with repeating narrative structures and binding incest taboos. 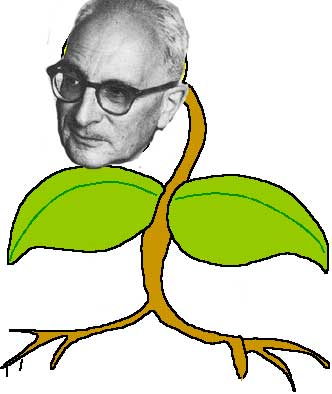 Now anyone have suggestions for other anthropomons?