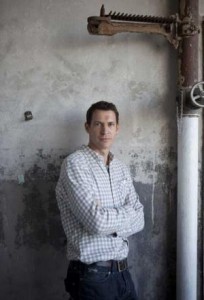 One of the amazing things about the work of each of these artists is how resonant it is with what we do as anthropologists. Like ethnography, their images are not simply about ‘documentation.’ They are about conveying something of lived experience that allows us, provokes us, to ask questions about how some particular lives come to look they way they do. They invite us to linger on the lives of soldiers long enough to think about how they are, and also are not, like others.

It strikes me that in our disciplinary conversations about what various modes of anthropological engagement might look like, we often fail to recognize the possibilities of such resonances. These possibilities are especially promising when the lives we explore are characterized, in one way or another, by war. Here, issues of politics and ethics lie both close to the surface and close to the bone. Tim Hetherington’s work was powerful proof of these possibilities.

For example, he said many times that he hoped Restrepo, his thoroughly ethnographic Afghanistan war documentary, co-directed with Sebastian Junger, would offer a new and more productive starting place for thinking about the war and US military intervention.

As Tim put it in an excellent interview at Guernica where he responds to Leftist criticism of the film:

While moral outrage may motivate me, I think demanding moral outrage is actually counter-productive because people tend to switch off. […] Sure, the face of the U.S. soldier is the “easiest entrée into the Afghan war zone” but it has allowed me to touch many people at home with rare close-up footage of injured and dead Afghan civilians (as well as a young U.S. soldier having a breakdown following the death of his best friend). Perhaps these moments represent the true face of war rather than the facts and figures of political analyses or the black and white newsprint of leaked documents.

In a more personal mode, Tim offered the experimental film Diary, which reflects something of the compulsions, rhythms, and senses of his movement into and out of ‘zones of killing’, as he suggested we might think of such spaces. Here too, we can find resonances with anthropological explorations of the particular vertiginous experiences of being in and out and in such spaces of violence, and of the uneven geographies of deadly violence.

News continues to unfold about the incident in Libya that may have also killed photographer Chris Hondros, and that seriously injured photographers Guy Martin, Michael Christopher, among others. And as we continue to hear more of Tim Hetherington’s death, and more remembrances of his life and work, I’ll also be thinking about what his work, and the work of other artists and journalists, has to offer us anthropologists; the places where our various projects meet, and the possibilities for thinking and acting that might begin from there.

I woke up this morning to receive the following notice in my inbox:

Last Friday our distinguished colleague Dell Hymes passed away peacefully in his sleep.

It hasn’t yet been reported in the newspapers, but Jason Baird Jackson has a post speaking to Hymes’ contribution in the fields of anthropology and folklore:

Dell Hymes was a amazingly influential folklorist, anthropologist, and linguist who revolutionized the study of language in (/and) culture in general, and of Native American narrative traditions in particular. He made important contributions to the history of anthropology, to descriptive and theoretical linguistics, to sociolinguistics, to folkloristics, and to Native American studies. He essentially created the areas on inquiry known as (1) the ethnography of speaking and (2) ethnopoetics and he played a key role reshaping linguistic anthropology from the 1960s onward.

For those at the AAA in Philadelphia, there will be a memorial Saturday December 5, 2009 from 7:30-9:30 in Grand Ballroom III at the courtyard Marriott.

I was thinking about Tom Boellstorff’s claim that “culture has always been virtual” when this story arrived, of a man who learned about birth from watching YouTube videos about how to deliver a baby, and then immediately delivered his wife’s baby. There is something about the convergence of virtual worlds and actual ones here in the ability to try out birth (from a few more and less graphic angles) before going through it “for real” which is, I think a nice demonstration of the relationship between virtual and actual. The baby is healthy and the Guardian’s version of the story notes that the man also learned to play guitar and solve a rubik’s cube by watching youtube videos, while the BBC version credits his navy training (another kind of virtual world. It gives me hope for all those level 80 healers out there…