This entry is part 8 of 20 in the Decolonizing Anthropology series.

As Dr. Joyce Hammond and team discussed in their analysis of 47 introductory anthropology textbooks published between 2001 and 2007, the images chosen for the covers are largely comprised of people of color, specifically non-Western and/or Indigenous people. Our examination of textbook covers in subsequent years shows little change, which means that textbook images continue to infer that to study culture is to study a non-“white, middle class, capitalist-based” Other (Figure 1). 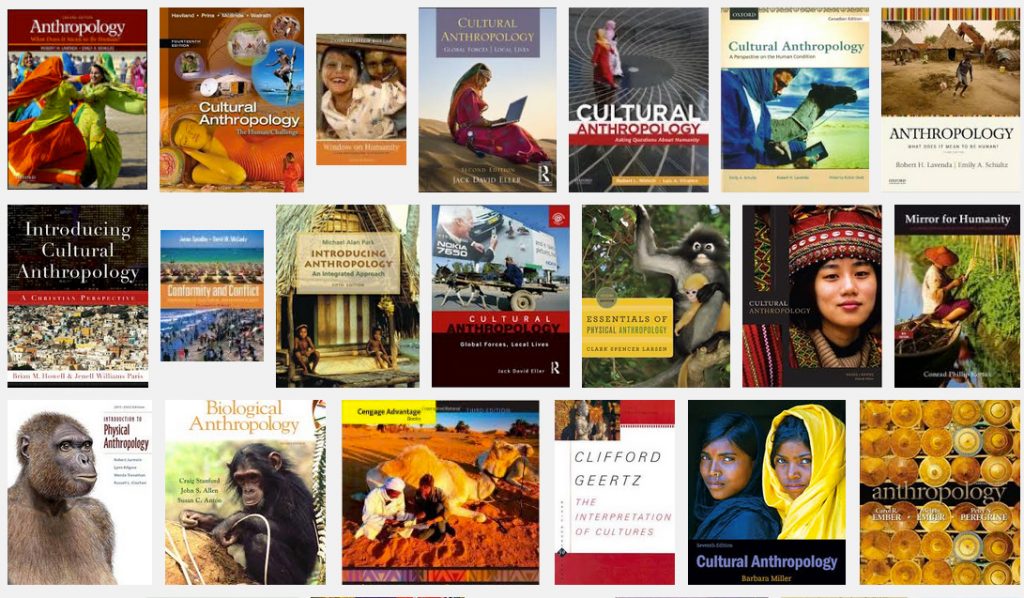 This poses an alarming predicament for the decolonization of our discipline. As universities and colleges increasingly call for general education curricula to include a diversity requirement, cultural anthropology courses are often the first to fulfill this role. But what does it mean when students’ first understandings of our discipline are from assigned textbooks that overwhelmingly showcase non-Western, Indigenous peoples engaged in “traditional” actions (e.g. dance, shopping in open-air markets, etc.)?

Diversity, by definition, means that our communities are constituted by a wide array of ethnic, social and political identities. We must be more forceful in asserting that diversity also includes those groups who have become so normalized in public discourse that their practices, communities and traditions have been rendered “invisible:” namely, white, middle-class, cisgender, North Americans and Europeans.

Decolonizing our pedagogy, therefore, requires drawing attention to the fact that culture can also be found in practices as “mundane” as shopping at a suburban grocery store in North America. The exponential growth of the practice of anthropology in industry, which studies these very places, demonstrates this shift.

Our (Jennifer’s in particular) experiences from teaching introductory courses reveal an even more complex scenario. In addition to white students, our diverse student bodies include underrepresented minority students, international students, first/second/subsequent generation Americans, and students of mixed race heritage who are interested in learning what anthropology entails and what it has to teach us about societies, both familiar and unfamiliar.

Yet anthropology’s textbook covers continue to evoke a world in which these students’ cultural heritages are viewed as bound within isolated, and ahistorical contexts. When historicity is evoked on a cover, it is often to showcase a supposed irony of juxtapositions between traditional and modern ways (i.e. an African or Asian woman in brightly colored textiles talking on a cell phone). In what ways can we, like the contributors to this series, more accurately portray a world in which the lived realities of colonialism, diaspora and globalization have created a complex contemporary world order?

The use of “exotic Others” on textbook covers also poses challenges for anthropology’s increasingly diverse professoriate. These images underscore the continuously fraught and uneasy relationship we (faculty of color) have with a discipline that arose under colonial auspices. Such images undermine our efforts to de-exoticize anthropology and its subject matter. How can a faculty member of color authoritatively assert that anthropology is not the study of the exotic other when the veritable billboards of the discipline are so visibly showcasing otherwise?

To decolonize anthropology is to acknowledge our discipline has relied far too long on marketing textbooks that have relied upon an assumption of the white gaze upon the bodies of physical and cultural Others. Coming from design anthropology as decolonizing methodology, we (Dori in particular) move beyond descriptions of the problem to provide concrete solutions to the main textbook vendors.

We propose seven visual strategies (Figures A through G) to address the concerns raised above. They explore the extent to which:

Traditionally, an internal designer or design team associated with the vendor curated the cover of the anthropology textbook, selecting a single image. This was due to the costs of mass print publication. With the emergence of print-on-demand, textbook companies can now take advantage of more participatory processes and provide a range of covers for one textbook.

Participatory strategies could include asking communities who have been the objects of the anthropological gaze to submit their own ranges of images (Figure A), or having instructors upload an individualized cover, within provided technical and aesthetic guidelines, for their on-demand textbook (Figure B). By customizing the cover, instructors can set up introductory conversations depending on the needs of their particular students. These participatory strategies directly address the critique of the lack of self-determination implicit in the current textbook covers and provide opportunities for communities and instructors to self-define the images of the field.

The dominance of the portraiture of non-Western, Indigenous women and children on the cover of anthropology publications has been subject to the harshest critique inside anthropology and arts fields. Changes in anthropological practices—since the processes of decolonization and the rapid expansion of applied anthropology—open opportunities to challenge the subjects of the anthropological gaze.

One strategy, which we used to great critical effect in the first part of our campaign, reverses the gaze by making explicit white, middle-class North Americaness an equally valid image of anthropology (Figure C). Dr. Hammond’s research demonstrated that students selected a mosaic of images as the most effective visual strategy for creating dialogue about the wide range of subjects in anthropology (Figure D).

Figure C. Original and Reversed Gaze Anthropology: What Does it Mean to Be Human? textbook cover example by Julie Hill.

The bias toward documentary realism in the anthropological gaze has been well addressed by visual scholars. It ignores the extent to which the textbook cover is designed with layouts, filters, cropping, and other aesthetic techniques that nudge the viewer into finding the book compelling. Acceptance of the artifice of the cover design opens up strategies of visual abstraction (Figure E), which one sees in the Anthropology 13th edition by Ember, Ember, and Peregine textbook.

Other abstract visual strategies include non-photographic illustrations (Figure F) or a conceptually providing a self-reflective mylar panel where viewers see themselves and the world around them (Figure G). Time Magazine’s 2006 “Time Person of the Year is You” cover provides an example of this approach.

We will hold a workshop with textbook vendors at the 2016 American Anthropological Association Meetings. By helping them select an appropriate decolonizing visual strategy, we intend to genuinely transform the way students are introduced to the field.

Jennifer Santos Esperanza is an associate professor and chair of anthropology at Beloit College. She holds a BA in Anthropology and Linguistics from USC and an MA and PhD in Anthropology from UCLA. She conducted her dissertation fieldwork in Bali, Indonesia, where she examined the mass production of imitation “ethnic art” for the global export market and has published her findings in the journals Material Culture Review and Research in Economic Anthropology. She is currently conducting research on refugee resettlement in the Wisconsin/Illinois area.