This entry is part 9 of 20 in the Decolonizing Anthropology series.

The massacre in Orlando was just two days before we sat together around a seminar table in an idyllic New England college town. A massacre of forty-nine people out dancing, celebrating life in a gay nightclub called Pulse. They were mostly young, queer, and Latinx. Gone. Already stories had turned to focus on the killer’s motivations. Was this primarily homophobic homegrown terrorism or the machinations of the Islamic State? We were meeting at Wesleyan University in Connecticut to discuss the creation of the Public Anthropology Institute (PAI) and contemplate ways to use our scholarly knowledge of cultural difference for greater service globally. Given the disheartening public debate in this moment reminiscent of Dickens’ best and worst of times, we were convinced that this work is necessary in the face of such violence and hate.

For too long anthropologists have retreated into the minutia of arcane disciplinary debate even when our knowledge can make a difference. It can be intellectually stimulating and important to turn inward, but conversations among ourselves cannot be the only ones we have. We also need to create work with a larger impact and a longer reach. As scholars who have studied across the global south and thought deeply about geopolitics, poverty, social and economic inequality, racism, homophobia, sexism and climate change, we believe it is time to reconnect with the obligation to produce knowledge that makes the world a better place. As the stakes get higher, anthropological perspectives can make critical, unexpected connections and offer direction beyond the logic of dominant assumptions.

The litany of ills threatening to unravel the fabric of contemporary social life is well known. For example, climate change promises the inexorable spread of disease and super-resistant bacteria, yet many public officials deny its incontrovertible presence. Climate scientists predict drastic coastal and river flooding that will result in major social dislocations. Social and economic relations in the world are deteriorating, with deepening disparities in power, wealth, health, life expectancy and both the ability and inclination to exercise violence. Fears and anxieties over our uncertain futures are producing conflicting and contradictory responses in both progressive and conservative movements world-wide. In the United States, #BlackLivesMatter seeks redress from the injustices of state-sanctioned violence by disrupting narratives and practices that normalize law-and-order profiling of Black and racially Othered youth and young adults of all genders. Simultaneously, there is a palpable uptick in collective expressions of overtly racist, misogynist and xenophobic speech and behavior. In response to a refugee crisis and increased immigration, similar toxic trends are spreading across Europe. Brexit won. Questions concerning definitions of citizenship abound. Each day brings reminders of the global presence of prejudice and terrorism, both homegrown and external. On these concerns and so many more, our insights have both explanatory and enrichment value.

The Public Anthropology Institute at Wesleyan University is being established to prepare more anthropologists to engage multiple audiences on urgent contemporary problems. PAI will hold its inaugural four-day summer institute in June 2017, with faculty members from different universities who each practice some form of public anthropology. Participants will be exposed to techniques for accessible and compelling storytelling. They will be guided in the craft of writing for different kinds of outlets, including op-eds, mainstream media, social media and blogs. Although writing will be the main emphasis, the institute will also address other key media and platforms, including filmmaking, spoken word and dramatic performance. Because risk, vulnerability and ethical challenges are endemic to all public scholarship, ongoing attention to these topics will be woven into the institute’s training approach.

There exists a long tradition of anthropologists who have made their work relevant and accessible to a broader public, but we are also mindful of professional criticisms of this work. Censorious, half-envious tags such as “popularizer” were once high on the dread list for anthropologists who shared their ideas more widely. Now we are somewhat freer to honor the better-self impulse that leads to exchanging knowledge that truly matters.  Still, joining the fray can feel like an exercise in vulnerability, especially when one can lob scornful critiques of the monolithic “media” and its coverage of vital events from the safety of the sidelines. We think the risk is well worth it. With the possession of new crafting tools and up-to-date, substantive information about how media platforms work, anthropologists certainly can and should do better.

We believe in the power of storytelling. Now, more than ever, we need voices that disrupt stereotypes, reductive forms of analysis and fear to see what lies beyond our old, worn out stories about differences that divide us. The cultivation of reoriented voices is necessary to communicate our ways of being in the world and to respond with urgency to the “now.” Hence, we view this project as essential to the decolonization of anthropology. By supporting anthropologists in their efforts to differently distribute and convey our insights, we aim to face our publics and extend the yearning for a politically committed scholarship towards social justice, which is at the core of the volume Decolonizing Anthropology.

The worst of times call for the best responses. We hope to do our part in training scholars to meet the public challenge of engaging in the ongoing debates of these times as we advance our collective awareness and pedagogies. This is anthropology for the 21st century: rich, rigorous and responsive. 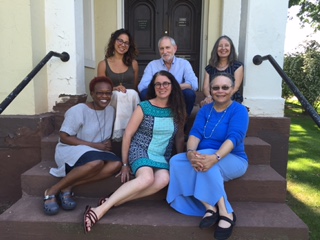