In an earlier post, I wondered: Why are there a dozen local brands of sildenafil (the generic name for what’s in Viagra) available in Egyptian pharmacies, and only one brand of emergency contraceptive pill (ECP)? I’m not sure that I have a wholly convincing answer to this question, but I’ll lay out some parts of the puzzle. Jump in with a comment if you have other ideas. 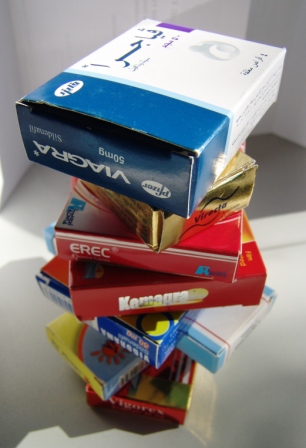 First, Americans might think of erectile dysfunction drugs (EDDs) as somewhat shameful (think about mocking attitudes towards Bob Dole’s decision to do Viagra ads), but they have a more positive connotation in Egypt. Two reasons: 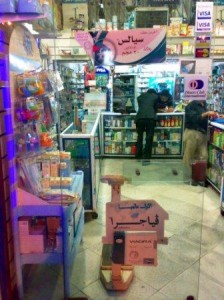 A pharmacy door in Cairo with ads for Cialis (top) and Viagra (bottom) on the front door. Photo by Hosam Moustafa.

Second: EDDs have a historical association with the black market / gift economy. When Viagra was first introduced and before lots of generic varieties were available, it was hard to get and expensive (it still is the most expensive brand on the market). People smuggled it into the country. It was given as gifts from one man to another. It is even used to grease the wheels of bureaucracy, being offered as a small bribe. Relationships with physicians are cultivated in order to access drugs that are hard to get. Even though sildenafil is now widely available in a range of prices, other drugs said to produce the same effect (Cialis and Tramadol are two such examples) still circulate semi-illicitly, in the category of a commodity that is thought to require both connections and expertise to obtain, and this is part of their appeal: they’re more than just commodities, they have a special aura.

So in asking why don’t ECPs have the same aura and circulate amongst women in the same way, maybe it’s partly because they’ve never been part of the black market. Packs of contraceptive pills, the kind you could cut up to equal a dose of emergency contraception, are government subsidized, widely available, and really cheap. 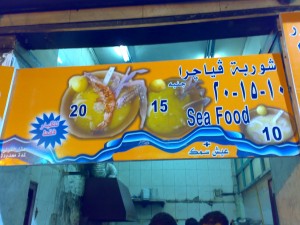 This sign at a Cairo restaurant stall advertises “Viagra soup.” The starred text on the bottom left reads, “For adults only.” Photo by Hosam Moustafa.

Finally: there are key continuities between modern pharmaceutical products for erectile dysfunction drugs and more “traditional” treatments, so the appeal of drugs like Viagra and Cialis is partly that they tie in with pre-existing ideas about how you can ingest certain substance to increase your virility. I’ve already written about Viagra sandwiches, and there’s also Viagra soup, dates, and who knows what else? This takes the notoriety of a global pharmaceutical product and maps it out over pre-existing notions about the virility-enhancing power of seafood. Using drug brand names to label food is not just a phenomenon in popular (shabi, as they say in Egypt) restaurants, either; a famous restaurant in an expensive mall in Alexandria offers the same soup (but wouldn't let us photograph their menu!).It's not just seafood that has this reputation. In the picture below is a wall of oils at a local apothecary, or <em>attar, which includes gargeer seeds or oil (that’s arugula to North Americans, rocket to Australians), about which there is a popular saying, “If women knew what gargeer could do for their men, they would grow it under the bed” (rhyming gargeer, arugula, with sareer, bed).

Salad = virility! It’s not exactly the American imagination of how food is gendered.

(Above) Apothecary wall with herbs, spices, and oils, including, on top, gargeer (rocket/arugula) oil. Photo by Hosam Moustafa.

Also I can’t resist including a picture of Cow Jam from the same pharmacy. A kind of vitamin supplement, the product contains neither cows nor jam. Photo by Hosam Moustafa.

But I put “traditional” in problematizing quotations above because it’s not like there’s a clear line between “traditional” remedies for erectile dysfunction and modern pharmaceutical products. Below is a picture of several products that Dr Moustafa and I bought in Cairo apothecaries. It’s not just oils and herbs. There are mysterious packaged products imported from all over the place, as well as local, “traditional” products. In the latter category, in the bottom right hand corner you can see shards of a resin — sold by the gram and very expensive — that is dissolved in hot water and then applied to the penis. It has a strong numbing effect and is supposed to make it possible for a man to perform longer. 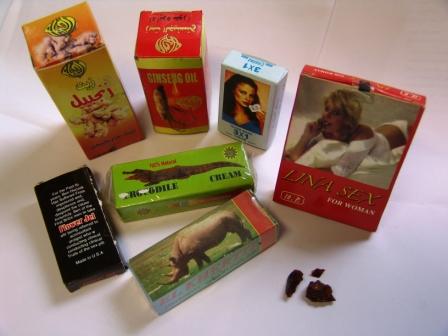 In the former category, notice on the right the package of Lina Sex, a gum which is supposed to increase the female libido, and which claims to be manufactured by “Astra zencesa group pharmaceuticals.” (As Dr Hosam Moustafa explains it, “All these drugs for women are used to treat decreased libido of women. It’s a main complaint here from most men that their women have decreased libido which I can explain as a kind ofself defense from men — I mean trying to say ‘the problem is not only me, my wife also has troubles’.”) The boxes with a crocodile and rhinoceros on them are made by the same local Egyptian company. 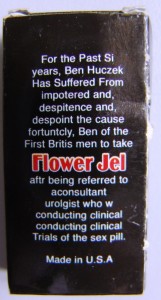 The delightfully mysterious “Flower Jel” claims to be “Made in U.S.A.” and reads on the back of the package,

“For the Past Si years, Ben Huczek Has Suffered From impotered and, despitence and, despoint the cause fortuntcly, Ben of the First Britis men to take FLOWER JEL after being referred to aconsultant urolgist who w conducting clinical conducting clinical Trials of the sex pill.”

Somewhat less delightfully mysterious is “Germany Black widows Powder Fever (Ms. special Super Night)”, which seems to be marketing itself as a date rape drug, because it says on the side of the box:

“Powdery white, tasteless, can quickly dissolve in various beverages without being found, after a few minutes after drinking, quick wins, after taking Chunxindangyang, fast exciting, noodles dinner, shortness of breath, hot air, eager to head shot, body heat, impatient with the rest of your love, this time of women, warm and flowing.” 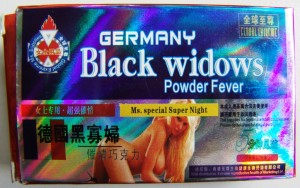 Incidentally, despite the claims on the side of the box, the contents are a clump of brown sludge with a powerful odor (and hence, I presume, taste, but I haven’t tried it).

The point is that when you go to apothecaries to find “traditional” remedies, what you find is a range of products that circulate transnationally (lots have Chinese characters on them but claim to be manufactured in Germany, Japan, or the US because of the prestige associated with products from these countries), that make reference to international pharmaceutical companies and clinical trials and German pornography, and that borrow on globally circulating (and ancient) notions of what constitutes an aphrodisiac (such as the Egyptian product with the rhinoceros picture on the box, even though rhinoceroses disappeared from Egypt during the Pharaonic era). Even local remedies and herbal formulations are now taught in the Khedr El-Attar apothecary training school, mimicking modern university education formats.