Michael Wesch and Ryan Klataske of Kansas State University have been working for the past year with WordPress Guru Tom Woodward  to create a free “Connected Course” in Introduction to Cultural Anthropology. This course, designed as “anthropology for everyone”, takes place on ANTH101.com. Wesch has drafted a free online textbook to accompany the course, and is running a pilot course this summer that starts Monday, June 5.  He will be producing a new video every weekday as part of the course. Here’s the introductory video for the summer course:

ANTH101 is not only free for students, but everything on the site is freely available for use by any instructor, in any course, anywhere in the world.  It can be used in a face-to-face environment as a free textbook replacement or in an online environment.  Instructors can set up their own “clans” (student groups) in which students can submit challenges (assignments) and cultivate a sense of community. In the future, Wesch and Klataske want to create ways for faculty to contribute to the main site (they already have a way to share and crowdsource resources related to each lesson) while also making their own custom versions for their own courses. Here, they discuss the philosophy and vision behind the course.

Living into New Ways of Thinking

Mike: Eleven years ago I wrote here about my philosophy of “anti-teaching” in which I try to inspire great questions rather than just deliver the right answers. Since then, I have become more and more convinced that the anthropological perspective is not “teachable” in the often-understood conventional sense of the term as “conveying information.” I have also stopped thinking about it as just a “perspective.” It is better understood as a different way of being in the world.

I like John Comaroff’s depiction of anthropology as being guided by an episteme with five epistemic operations, but think about what this means for teaching if we try to take his 5 operations and convert them to Student Learning Outcomes:

1) Critical estrangement:  Students must be able to see beneath surfaces and beyond appearances while attempting to transcend biases and assumptions.

2) Being and Becoming: Students must be able to “map processes by which social realities are realized” and understand how we co-construct the world.

3) Deployment of the Contradiction: Students must be able to see the dynamic generation of social processes through contradictions, paradoxes, and ruptures in culture.

4) Context, context, context: Students must be able to see the big picture while also seeing the relevance and importance of small minute details. See big. See small. See it all.

5) Grounded Theory:  Students must be able to sit in the immersive ambiguity and uncertainty of a messy problem for an unknowable length of time while slowly giving birth to a meager little insight, treasure it for a moment, and then throw it away.

How do we measure that? How do we teach that? … especially in the context of shrinking university budgets, growing class sizes, and online courses. My on-campus Introduction to Cultural Anthropology class has 450 students. Most of them have never heard of anthropology and only a handful are majors. Since 2014, Ryan has been developing and teaching our online for-credit version of this course, with enrollment growing quickly each year. Together, these courses have provided the foundation for ANTH101.

Ryan: When I first began to develop the online course, I quickly realized that I wasn’t designing a course for just traditional 18 to 21-year-old college students, but rather students of all ages and walks of life—some returning to school after years or even decades. My students have ranged from veterans and military personnel overseas, to working professionals, stay-at-home moms, a cab driver in Cincinnati, a night shift nurse in New York City, and a rancher in southeast Kansas. This led me to think of this class as “anthropology for everyone”.

Mike: I love that. Ryan and I go way back. We are both undergrad alumni from K-State, where we both teach now. In fact, Ryan was the first student I ever met when I started teaching here. He was a big reason why I had the courage to break free of traditional teaching methods and try the World Simulation I described here 11 years ago. I was also already exploring the idea of teaching anthropology as a “way of being” rather than just a bunch of boldface terms. I came up with the idea that the most important tools of the anthropologist are not our recording devices or fancy theoretical terms, but a capacity for communication, empathy and thoughtfulness. Combined together, I present these capacities to students as the “anthropological toolkit.”

Ryan:  I’ve used this toolkit often in my own travels and research, and when I began teaching online at K-State, I once again turned to this toolkit. I’ve realized that the anthropological toolkit is also an ideal teacher’s toolkit, especially in online environments which are often perceived to lack real interaction and authentic human relationships. Although teaching is dynamic, my philosophy is that the value of communication, empathy and thoughtfulness never change.  I also believe that learning anthropology online can transform offline living through real-world practice.

Mike: Yes! I think that’s one of the most exciting things about our project. I had always thought of online teaching as somehow a step down from “real teaching” but the more I saw what you were doing in your class—the strong relationships you were building and the amazing comments from students (Ryan will not brag, but his teaching evaluations have been nearly perfect with students writing very emotionally about just how transformative the course has been for them)—the more I had to reconsider my assumptions. I started to realize that by never being in a physical classroom you were forced to use the world to help you teach, sending students off to learn in the world, rather than just about the world.

It was at this time that I started re-tooling my own syllabus to really think about what it is I’m really trying to teach—more in line with those seemingly impossible SLOs built from Comaroff’s episteme. I ended up writing a narrative-style syllabus that would take the student on a bit of a “hero’s journey” toward realizing and integrating 10 big ideas of anthropology into their lives.

Ryan: And for each of these 10 big ideas, or lessons, we came up with a challenge for the students to really put the big idea into practice.

Mike: The guiding principle here is:

Ryan:  One of their first challenges is to talk to strangers—one of the basic elements of anthropology. Students ask deep questions about someone’s life—the kind of questions anthropologists often ask—and share a photo that represents their new connection. In another assignment, students attempt to make the familiar strange by documenting and describing some aspect of American culture from an outsider’s perspective. The snapshot below comes from an amazing video by a student named Donnell, who introduced us to his motorcycle club as if he was an anthropologist studying an exotic culture in a far-off land. By the end of this film, however, we gained new insight into the role of this club in creating community and a sense of kinship among veterans and military families. 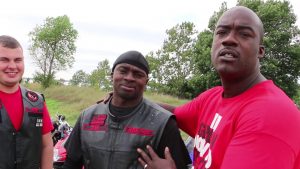 Mike: We should mention that another guiding principle of the challenges is that we want them to be so intrinsically interesting that students actually want to do them, regardless of whether or not a grade is given.

Ryan: Exactly! These photos come from the challenge called the Unthing Experiment, in which we give up something–some thing that is central to our lives that we take for granted. The point is to explore what life would be like if this thing didn’t exist. Here, Noelle decided to give up silverware for 72 hours.

She noted that she probably shouldn’t have picked salad and lasagna for her first meal! Other students have given up things like television, internet, makeup, chairs, and pillows, and have documented their experiences online.

Mike: I love that we have students coming back to post new challenges and updates long after the class is over. I don’t think this would happen if we had called them “assignments.” And I am constantly running into students telling me how this or that challenge really changed their lives.

Ryan: Interesting you mention that…I recently learned that one of our challenges—the Other Encounter, in which students try to understand and empathize with someone as different from them as possible—has resulted in a long-lasting relationship!

Mike: And I had a student come to me in tears the other day thanking me for the 28 Day Challenge.  A friend was with her and said, “That’s what it was?”  Apparently the 28 Day Challenge was the beginning of a major turnaround in her life.  She had dug herself out of a really dark place.

Ryan:  The results have been incredible.  Here is another example in which every day Kelly created new and unique art, and updated her beautiful page for all to see.

That is definitely one of the most fun and impactful challenges.  It’s all about trying something new, part of our effort to explore the role of habit in human evolution and its power in our everyday lives. The challenge is to try something new for 28 days, to try to build or break a habit.

We also take part in some of the challenges. Recently, I’ve given up coffee and tried to get better at running—both difficult—and last year I even tried to learn the banjo while Mike learned the fiddle. Here is a quick video of the progression from Day 1 to the premiere of the 28 Day Band in front of Mike’s large lecture:

Mike: I’m totally addicted to the challenges myself. I do them all every time I teach. Actually, my 28 Day Challenge right now is online teaching itself! I have never done it. I hate being on camera. And so I have challenged myself to create a video per day everyday of the summer class. It is a little rough (as you can see in the video!), but I’m always excited by learning new things.

Ryan: I just want to come back to the theme of online learning for offline living. I think this phrase has two messages that capture the essence of our project. The first is that online education is vitally important to a wide range of people, who for various reasons, might not have access to a traditional university education. The second is that learning anthropology online can change the way you see the world, transform the way you live within it, and ultimately, make it clear that you can change it. You, Mike, taught me that anthropology has this power, and it’s impacted the way that I teach and live today. I’m excited to see how you are able to teach a whole new audience through ANTH101 this summer.

Mike: The best way to really see what we are doing is to follow along this summer, but I will just add the caveat that everything is beta. The book is an incomplete draft and we are constantly re-evaluating the approach, content, site, philosophy, everything. (Apologies to Tom Woodward, our WordPress guru who sometimes has to tear down big things and rebuild them!)  We are driven by a concern for the well-being of our students, of the world, and simply want to help make higher education more accessible, affordable, and effective.