Why was Clifford Geertz such a popular anthropologist? Because he connected anthropology and the humanities? Because he was a great writer? One answer that often comes up is that he was a great ethnographer. I mean, he actually did ethnography. Negara (1980) was a historical anthropology of power that appeared just in time for 1980s-era historical anthropology. Meaning and Order in Moroccan Society (1978) is a massive tome.  Kinship in Bali (1975) was technical and dense, hardly the lackadaisical em-dash filled slackfest some people accused Geertz’s writing of being. Peddlers and Princes and Agricultural Involution (both 1963) are vintage New Nations ethnographies. Religion of Java (1960) seems to rise above its Parsonian roots.

But what does it mean to be a great ethnographer? Geertz had a style — not everyone would call it great — which made you ‘feel you were there’. He went back to the field, even when he was professionally secure enough that he didn’t have to. That counts for something. His work is detailed… although cough perhaps future historians will wonder how much his collaborators/spouses played a role in Keeping Things Rigorous. Maybe above all, Geertz was a successful ethnographer because you could read his ethnography and say: I could do that.

I wouldn’t really say that Geertz was ‘imitatable’ because that implies that those influenced by him merely reproduced him. Maybe it’s better to say that he was ‘exemplary’: He offered a model of fieldwork that you could take up and make your own. His was the ethnographies that launched a thousand culturalist ethnographies. I think this ability to be exemplary is a major force in what makes anthropologists famous to other anthropologists. It’s not just your institutional position (although this helps) or the novelty or accuracy of your ideas (which, sadly, matter less than they should). It’s your ability to fill people’s imaginations with a vision of their future self that seems feasible and desirable to them. They say: “I want to write a study like that — and I can!”

Geertz was maybe a great ethnographer in these senses, but not perhaps as great as Hal Conklin. As Michael Dove notes in his superb obituary of Conklin — and since this is a piece on Geertz, after all, I do feel it would only be appropriate to include a long em-dash bracketed phrase to indicate that I, as a professional consumer of obituaries, do consider Dove’s to be absolutely exemplary — tells the story of Conklin visiting Geertz during Geertz’s fieldwork in Morocco:

After listening to Geertz discussing his work, Conklin asked questions about the type of bamboo growing around the edges of the olive groves, the construction of the wall encircling the town, and the purpose of various odd items being sold in the bazaar. When Geertz could not answer his questions, Conklin said he would “take care of it” and sent Geertz home. He then got some paper from a butcher’s shop, exhaustively mapped the bazaar, and presented Geertz with the completed map.

Conklin’s masterful Ethnographic Atlas of Ifugao was released in 1980, the same year as Negara. The difference between the two is that the Ethnographic Atlas is the result of almost two decades of research, and that you have heard of Negara. I think there is a continuum with fame on one end and specialization on the other. The more and more you can provide genuinely new information, or advance theoretical understanding, the less and less likely people will be t read your work since it is, by definition, highly specialized. The more accessible your work is to Anthropologists Everywhere, less likely it is to have something to say to people who are really stuck into the phenomenon you are studying.

Sometimes I think Geertz was a great ethnographer because he gave people permission to be lousy fieldworkers. He was a lot like Victor Turner in this respect. The both came of age at the same time. Geertz got his Ph.D. in 1956, one year before Victor Turner. Their Ph.D. fieldwork was probably grueling. Turner’s Schism and Continuity was a masterpiece. An incredibly detailed, hyper-specific masterpiece. I sometimes wonder if Geertz, Turner, and other more ‘interpretive’ or ‘symbolic’ anthropologists didn’t just look back on their Ph.D. research and think: Heck no, I’m never doing that again. And then told their students: “You know, just don’t bother. There’s no point. No one will read it anyway.” 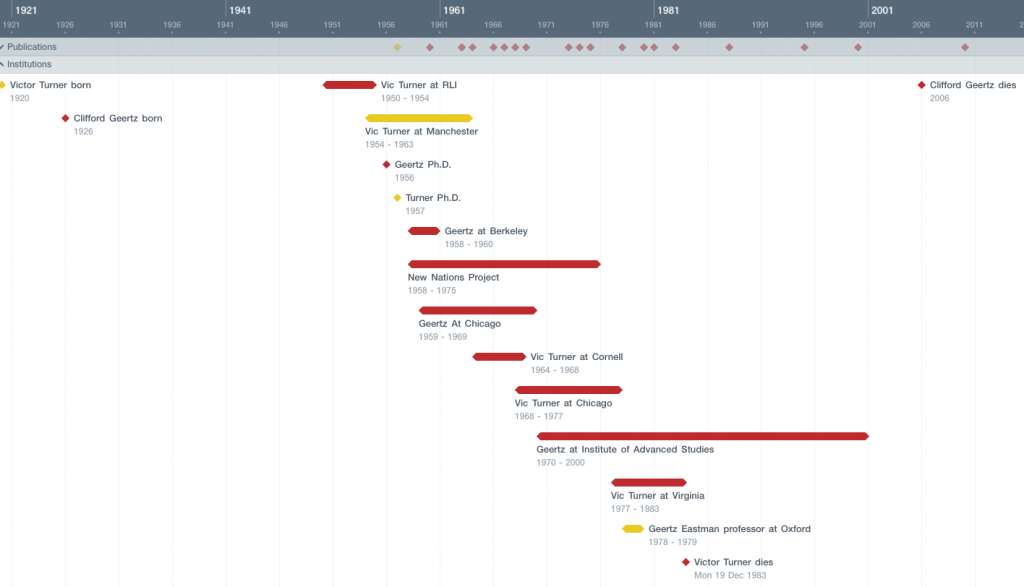 Was Geertz a great ethnographer? Yes. Was he a great ethnographer? Probably not. Is that fact a bad thing? Does it matter that it changed how anthropologists evaluate ethnographies altogether? I think so. After World War II, anthropologists like Douglas Oliver and Max Gluckman (sponsors of the research of Geertz and Turner respectively) were part of a giant wave of people seeking to professionalize and scientize and rigorousize anthropology. They pretty much failed. It’s a blessing and a curse that anthropology has been living with, for better and worse, ever since.