This entry is part 10 of 20 in the Decolonizing Anthropology series.

Detroit moves quickly; issues of scale and pace in a city of this size pose major challenge to contemporary archaeological practice. I’m not sure what a decolonizing archaeology should look like here, but it’s happening nonetheless. It is grassroots. It connects with communities. It shares the skills we have as social scientists with people, places, and collections. The goals are simple – to tell stories that matter, to empower memory, to increase participation, and, hopefully, to spur action against destructive forces of erasure and exclusion. We don’t have the luxury of time and protracted theoretical deliberation on our side; this work is done in a climate of rapid late capitalist development and privatization, where most of places we encounter are at the mercy of irreversible decay from ruination or demolition by developers.

In the short space of the past century, capitalism conquered Detroit. Lumber barons, Henry Ford’s $5 day, and Motown attracted wealth, migrants, and notoriety to the city. When businesses were done winning they left behind a “traumascape” of blight and conflict (Tumarkin 2010). Right now the city is experiencing a process of reckoning with its emergent post-disaster status through various public, private, and grassroots efforts. A palpable tension exists between neoliberal developers (who are arguably re-colonizing parts of the city) and Detroiters (including a Detroit diaspora). An undergirding battle wages over which stories will be told about the city – its histories of industrial success and innovation on the one hand, or the accounts of inequality, violent racism, and epic systemic failures on the other. In this post I briefly reflect upon the ways in which contemporary urban archaeology is attempting to work both within and against the frameworks of late capitalist development, and I provide a few examples from our work at Wayne State University that link these efforts to the themes of participatory action, unlearning, return, and reclaiming that fall under the umbrella of decolonized practice. 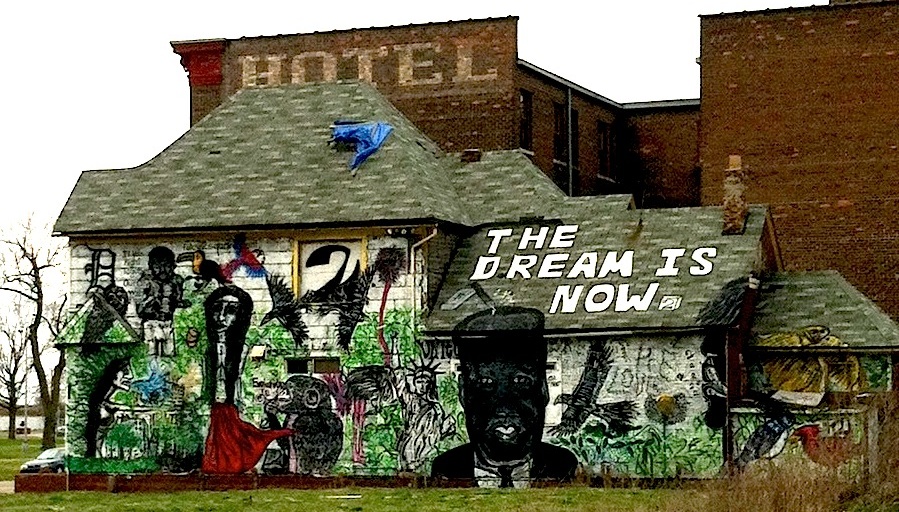 Figure 1.  The Imagination Station in the Corktown neighborhood of Detroit, 2012 (Photo: K. Ryzewski).

Detroit is a city of 139 sq miles – within its boundaries, the cities of New York, Boston and San Francisco can comfortably fit with room to spare. Physically, there exists an expansive blighted landscape within the city limits, which reached epic proportions in the wake of the recent mortgage crisis [upwards of 80,000 abandoned properties].  Socially, there is a stark socio-economic divide between Detroit and the surrounding metro area. Today the city’s population is just shy of 700,000, and it is 82% African American. But a significant Detroit diaspora population of about 3.5 million people live in the Metro suburbs. Many in this population self-identify as Detroiters – a large proportion were born and raised in the city, or their parents were.  What this means, to borrow from the anthropological literature on transnational migration, is that there exists a multiplicity of belongings associated with Detroit, playing out on different levels of engagement that are concurrently “here” and “there” (Bell 2016, Levitt and Waters 2002, and others).

In the current climate of revitalization there are at least a half-dozen well-funded and highly visible development and planning initiatives that are envisioning what a future Detroit might look like (Detroit Future City, Data Driven Detroit, 7.2 SQ MI).  A recurring issue with some of these blueprinting projects is that they are built on cliché sketches of the city as gritty, vacant, a blank slate – a premise that effectively ignores the past and present of the city in its many guises.  Some initiatives have also met with pushback from local residents. As my colleagues Andrew Newman and Sara Safransky (2014) observe, Detroit Future City is poised to perpetuate many of the inequalities that have for so long fueled the city’s underlying socio-economic and racial conflicts. Currently, two billionaires, Mike Ilitch and Dan Gilbert are almost singlehandedly implementing ideas from these blueprints by transforming huge swaths of the downtown neighborhoods in aggressive – and privatized – rebuilding campaigns. Archaeologists have not been included in any of these planning conversations. 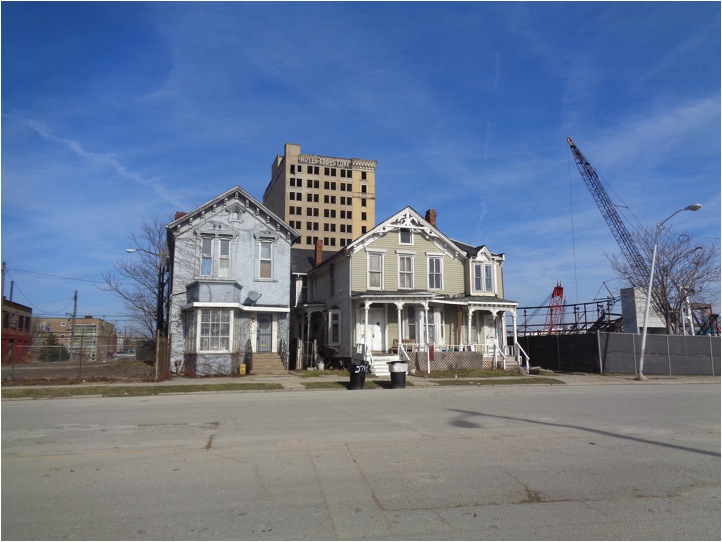 Figure 2. The last of the historic district standing in the shadow of the massive Ilitch hockey and entertainment district development, 2016 (the house on the right is now asking almost $4 million)  (Photo: K. Ryzewski).

The response that my colleagues and I have designed to the situation of Detroit today has been to create a program of grassroots archaeology that is structured and guided by local partnerships with stakeholder groups within and beyond the city limits. Some of these are slow multi-year affairs, others just take a weekend. All involve Detroiters, multiple academic fields, and much more than standard archaeological methods.

Here’s a quick summary of a few of these projects:

Ethnic Layers of Detroit is a digital storytelling project (funded by the National Endowment for the Humanities). This project works with a two-dozen member advisory board drawn from local non-profits, institutions, and community organizations to produce – in collaboration with students and residents – short two-to-three minute digital stories about places in Detroit that are linked to layered ethnic histories.  In doing so it foregrounds the existence of the subjects and objects of our studies in the contemporary moment.

We will have 25 stories completed by the end of 2016, and many more student and community stories to add to that repertoire. The recordings preserve some elements of the physical landscape and its absences in ways that cannot and should not survive intact in the future city visions. They also invite either place-based experiences or distant engagements with the featured sites through what Hennessy et al. (2013) have called “digital return”. Examples of our ELD project stories include the Brewster-Douglass homes (the first African American federal housing project in the country), the former Chinatown neighborhood, and an empty house lot where Victor Herman, a Jewish American autoworker who wound up imprisoned in a Soviet-era Siberian Gulag, once lived. 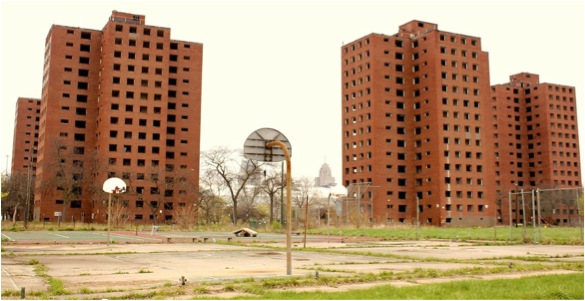 Figure 3. The Brewster-Douglass homes in 2012, two years before they were demolished (Photo: K. Ryzewski).

One of the most fruitful collaborations has been between our Wayne State archaeologists and the Detroit Sound Conservancy. Together, over the past year, we have mapped, excavated, and generated various media about two former places associated with Detroit’s music-making history. One of these sites was at the Blue Bird Inn jazz club – a prominent African American venue that was once home to musicians like Miles Davis and Cannonball Adderley. Lorin Brace, Wayne State alum and current PhD student at the University of Maryland, recently completed his Master’s Essay on the archaeology of the club. The archaeology of the Blue Bird Inn, a derelict building, probably won’t lead to any sort of site-specific restoration, but it is generating widespread interest in accounting for the city’s rich musical heritage in visions of future exhibits, city tours, and other plans.

There are several other initiatives, (e.g., Unearthing Detroit, Speakeasy Project, Roosevelt Park), but one final one for now is arguably the most important for the promoting the relevance of archaeology to Detroit – this is the Time Jumpers program – an educational module geared towards elementary school students and customized to the archaeology of the region. We began the program 2014 by hosting the sessions in local schools (15+ sessions so far), but as word spread we’ve expanded into statewide science festivals, the National Parks Service’s “Parks for the People” agenda, and the White House’s “Every Kid in a Park” program.

What do these grassroots initiatives have to do with decolonizing archaeology in Detroit?

Detroit is a city where place-based strategies for growth are neglecting people-based realities of the past, present and future. Archaeology tempers this in some measure by bringing places and people together.

What these archaeological projects do is allow for what I’m calling a “Return to Detroit”, they are people and place-centered re-visions of the city’s past in the present (I borrow the notion of return from Hirsch and Miller 2011). They foster memories that tie and bind to place and people, but also propel the city towards a future that includes them. This notion of embraces different aesthetic modes – photography, music, cultural engagement, activism, and the ways in which they are mobilized to activate memory and reframe experiences with transformed places – in this case, providing, to quote Samuel Collins,  “an anthropology for rather than of the future” (2008:125).

Bell, J., 2016. Migrants: keeping a foot in both worlds or losing the ground beneath them? Transnationalism and integration as experienced in the everyday lives of Polish migrants in Belfast, Northern Ireland. Social Identities, 22(1), pp.80-94.

Krysta Ryzewski is a historical archaeologist and an Assistant Professor of Anthropology at Wayne State University in Detroit, where she co-leads the Anthropology of the City initiative. Her research explores the consequences of disruptive social and environmental pressures on past landscapes, communities and material culture production. She currently conducts major research projects that focus on these relationships in urban North America (Detroit) and in the Caribbean (Montserrat). She also has a background in the materials science subfield of engineering. http://clas.wayne.edu/krysta-ryzewski

2 thoughts on “Reclaiming Detroit: Decolonizing Archaeology in the Postindustrial City”