Anthropologists for the Boycott of Israeli Academic Institutions presents anthropologists of education Thea Abu El-Haj and Fida Adely. The authors discuss the extreme violations of Palestinian youths’ right to education and why the boycott is an important and necessary tool for educational justice.

Voting is open at the AAA until May 31. To vote “yes” to have the AAA adopt the institutional boycott, follow these instructions.

Violating the Right to Education for Palestinians: A Case for Boycotting Israeli Academic Institutions

During the 50 day Israeli War on Gaza in the summer of 2014, the Israeli military killed 1462 Palestinian civilians, 495 of whom were children. Israeli forces destroyed or severely damaged the homes of over 100,000 Gazans and over 200 schools. Among the most egregious events of this 50 day siege were the bombings of three UN schools that were sheltering internally displaced persons (IDPs). According to Human Rights Watch, 45 Gazans, including 17 children, were killed in these attacks on schools. Those killed had believed that UN facilities—particularly schools—would offer protection from rampant shelling.

The Israeli bombing of UN schools became a focus of much international condemnation—a flagrant violation of human rights. Moreover, Gazans continue to feel the effects of the destruction of so many schools because the nearly 10-year Israeli blockade of Gaza has greatly hampered reconstruction, leaving the region in shambles. 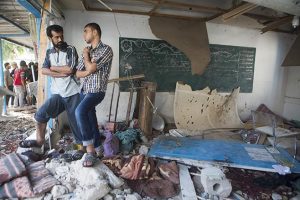 As anthropologists of education and educators committed to social justice, we want to call attention to the routine and systematic violations of Palestinians’ right to education—violations that are imbricated with, not accidental to, Israel’s unjust and oppressive treatment of Palestinians. These violations of the right to education are one of the key reasons we support the academic boycott of Israeli academic institutions and we urge our colleagues to vote in favor of the AAA resolution to boycott Israeli academic institutions.

“When universities and schools are bombed, when students and teachers cannot reach their classrooms due to military checkpoints, an apartheid Wall, and U.S.- supplied tear gas, when supplies and books cannot clear Israel’s control of Palestinian mail, when students are taken as prisoners in Israeli jails, and when international lecturers are routinely denied entry to the Occupied Territories by Israel, the odds are stacked against Palestinian students and educators.” (Atshan, p. 6)

Numerous impediments constrain the most basic right to education for Palestinians living in the Palestinian Occupied Territories. The separation wall and a system of checkpoints and by-pass roads restrict access to educational opportunities. The Israeli military frequently closes schools and universities across the Occupied Territories. Educational opportunities in Gaza are compromised further by the closure of the entire Gaza Strip, the virtual imprisonment of its inhabitants, and the extensive destruction and damage of Gaza’s infrastructure (the result of three Israeli military campaigns against Gaza in less than ten years). Throughout the West Bank children are the targets of violence by settlers and Israeli Defense Forces. The violence is particularly acute in East Jerusalem and Hebron where settlers regularly harass and attack students and teachers.

University students are not immune from these restrictions and violence. Israeli forces regularly raid university campuses, destroy property, and arrest student activists.[1] During Israel’s assault on Gaza in 2015, at least three universities were bombed, in one case killing 22 people. Because of the blockade, Gazans are unable to travel to the West Bank to attend university and only a small number are allowed to go abroad. In 2008, the US state department withdrew Fulbright fellowships from eight Gazans because Israel refused to allow them to leave the Gaza Strip.

In East Jerusalem, educational exclusion and deprivation have been part of a larger set of administrative policies and practices that are systematically driving Palestinian residents of East Jerusalem from their ancestral homes and community.[2] These policies have dire consequences for the access, continuity, and quality of education for Palestinian children. According to Ir Amim, a Jerusalem-based human rights organization, Palestinian children face extreme shortages in access to education with a current gap of over 2000 classrooms needed to educate Palestinians in Jerusalem. In a 2015 report, Ir Amin researchers conclude:

“The gaps reviewed in this report have intolerable repercussions for tens of thousands of children who have no place in the official educational system and are forced to study in recognized but unofficial institutions. In most cases, this situation affords only a substandard level of education, in an overly congested environment; in all too many cases, resulting in a complete dropout from the education system.”

Thus, in addition to practices that directly drive Palestinians out of their homes (such as removal of residency rights, or settler takeovers of homes), the infrastructure and services needed for a decent quality of life are significantly lacking.

Palestinian citizens of the Israeli state (20% of the population) suffer systematic discrimination. Their second class status is enshrined in law and in practice. In the educational sector, “Arab” schools are underfunded with the Israeli state providing three times as much funding to Jewish students. The result is large classroom sizes, poor facilities, and an overall decrease in educational quality in schools. It is no surprise then that Palestinian citizens of Israel are underrepresented in higher education. This bias in the educational sector is in keeping with the Israeli state’s policies of neglecting and under-funding public services in Arab towns and villages.

There are numerous reasons to support the boycott of Israeli academic institutions, many of which have been discussed by colleagues on this site and elsewhere. One of the main reasons for our support is the systematic deprivation of Palestinian rights to education and academic freedom—a status quo that has been well documented by local and international human rights organizations, the United Nations, as well as AAA’s own Task Force on AAA Engagement on Israel-Palestine. While many who oppose the boycott do so on the spurious grounds that it will violate the academic freedom that Israeli scholars currently enjoy, we call on colleagues to make use of their privileged academic freedoms to stand against the systematic deprivation of Palestinian rights to education. What greater constraints on academic freedom can there be than those routinely faced by Palestinian students and teachers.

1. See Right to Education Campaign Bir Zeit for more information on the oppression of Palestinian students.

2. In 1980, Israel has formally annexed East Jerusalem and declared a unified Jerusalem as its capital. However this annexation is in full violation of international law and has not been recognized by any other nation. Policies aimed at expelling Muslim and Christian Palestinians from East Jerusalem work to try and legitimize this illegal annexation by creating new facts on the ground.