In honor of Mother’s Day this year I’m sharing notes from a lecture I give in my Introduction to Anthropology course. Kinship, I tell them, is the kernel of the discipline. Families are at the center of our lives, they make us who we are. So its interesting to note that in different cultures people have different ideas about who counts as family, what their roles ought to be within the collective, and what sorts of rights and obligations they ought to have over one another.

We spend some time doing kinship diagrams. I show them my family and lead them through exercises where they chart their own families. Such diagrams are passe I guess, but for me they hold quirky charm not unlike the lost art of diagramming sentences. I can throw them up pretty quickly on a white board and we use them in class to help visualize social relationships.

Students find patrilineal descent, which flows from fathers to offspring, to be somewhat intuitive. After all they behave in a similar way to our tradition of passing down surnames and students can anticipate how patrilineality might coincide with a a socio-economic system that favors powerful fathers and husbands. But matilineal descent which flows from mothers to offspring are strange to them, its illogic manifest most clearly in the responsibilities for discipline granted to resource providers such as uncles and brothers, with weaker bonds ascribed to biological fathers.

Matrilineality seems exotic to students, but in fact some examples of it can easily be found in one of the most ancient charter documents of “Western Civilization.” Bereishit (Genesis), the first book of the Torah (Old Testament).

I don’t know if you’ve ever just sat down and read a whole lot of the Bible. My knowledge of it is fairly limited. I am familiar with Genesis which is distinguished by its engaging mythic narratives that rewards rereading. These incredibly evocative and powerful stories caught the imagination of underground cartoonist R.Crumb and inspired him to complete a fully illustrated Book of Genesis. The Crumb illustrations, thick and fleshy, help out to humanize the characters especially for people who aren’t already familiar with the stories.

Now granted, what I’m about to do is not the usual way one reads Genesis. I’m only doing this in order to make some points about matrilineality, not to claim some sort of religious insight.

Some scholars estimate that the Old Testament was first written down in 1000 BCE. Prior to that the stories almost certainly existed as oral traditions, so their true age is unknown. According to some they may have roots in ancient Summerian myths. Genesis covers a lot of ground that is outside our scope. What we’re focusing on here is the middle portions of the Book which follows the lives of one family all descended from a man named Abraham.

As you might guess the stories mostly focus on the men of the family: Abraham to Isaac to Jacob to Joseph. Simply put there are not very many female characters. But if you read Genesis from the point of view of the few females that are there some remarkable similarities to matrilineal kinship patterns arise.

I already told you I’m not a Biblical scholar, okay?

Abraham’s wife, Sarah, cannot have children and so she gives her slave girl, Hager, to her husband. Predictably this ends in tragedy as Sarah grows jealous of Hager for giving birth. She chases Hager off, but she promptly returns after an angel of the Lord directs her to do so. 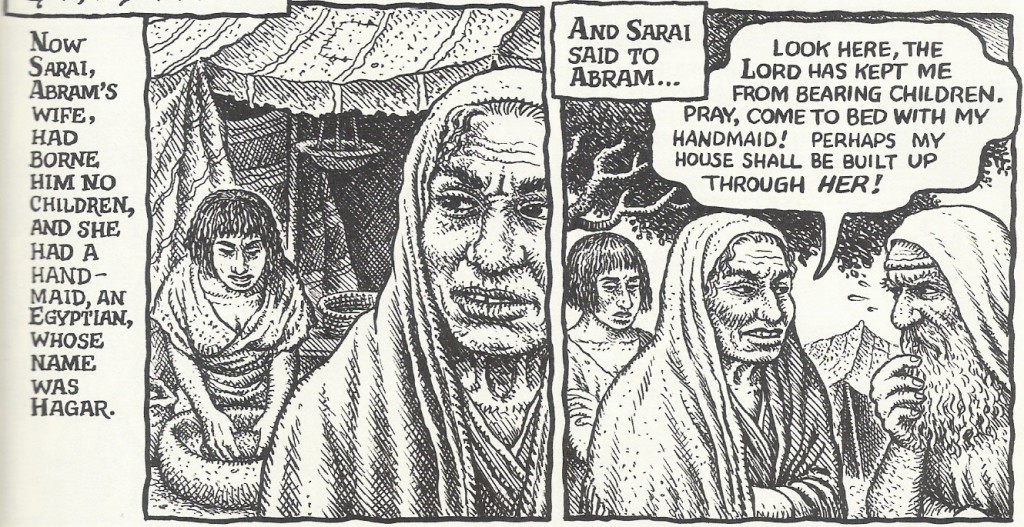 Later there is a miracle and Sarah does conceive despite her old age. This son is to be Isaac. Ultimately Sarah instructs Abraham to banish Hager and his first born son Ishmael. This is the mythic fission of the Abrahamic religions as Ishmael becomes the ancestor of many Islamic prophets, including Mohammed. The line that issues from Sarah through Isaac becomes the Hebrews. So the Muslims and the Jews have the same father but different mothers! 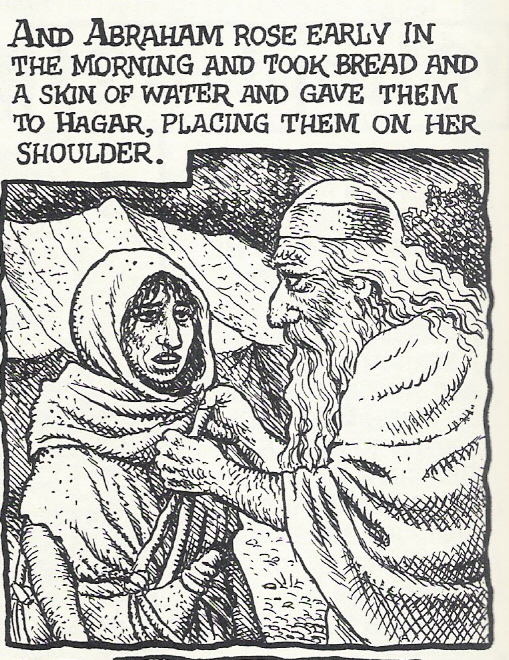 In fact Abraham outlives Sarah and after her death he has many other wives. And although children by these women are descended from Abraham, Abraham’s wealth and God’s blessing go to Isaac. Thus the chosen people, the Jews, are – following a matrilineal pattern – the descendents of Sarah. Others who are the descendants of Abraham by other women are excluded. 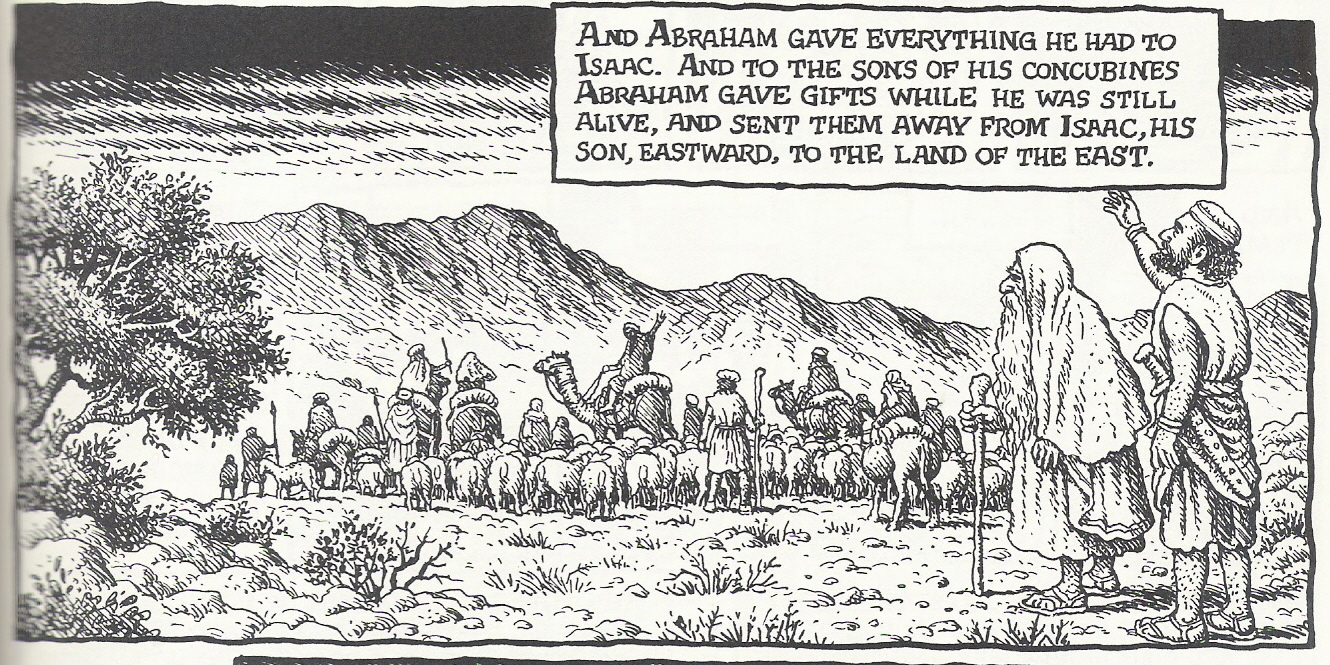 In the next story Abraham wants to find a suitable wife for his son Isaac. He doesn’t want Isaac messing around with any of the local girls, so he sends one of his servants back to his homeland to the family of his brother, Nahor. The servant returns with Rebekah, technically Isaac’s first cousin once removed. What’s interesting to us in this context is how he acquires her.

So Abraham’s man makes this long journey until he finally arrives at Nahor’s compound. There’s this pretty young woman at the well and she shows her hospitality by drawing water for him and his camels. Abraham’s servant is impressed with her kindness and gives her gifts which she immediately takes back to show to her mother and brother. 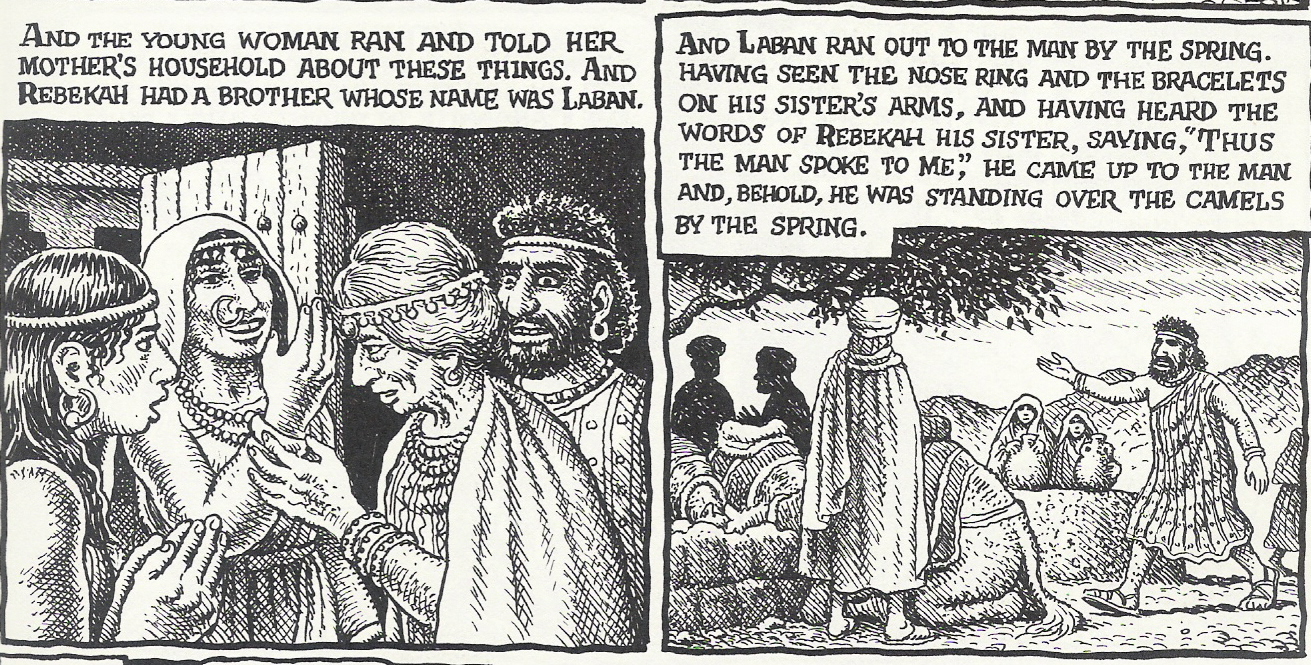 Laban, Rebekah’s brother, is intrigued that there’s some rich stranger on the outskirts of town giving gifts to his sister so he goes to check it out. It’s the brother that negotiates the terms of marriage for his sister, the father is nowhere mentioned. Abraham’s servant pays Laban and Rebekah’s mother with more gifts and they reciprocate with a feast in celebration of the arrangement. 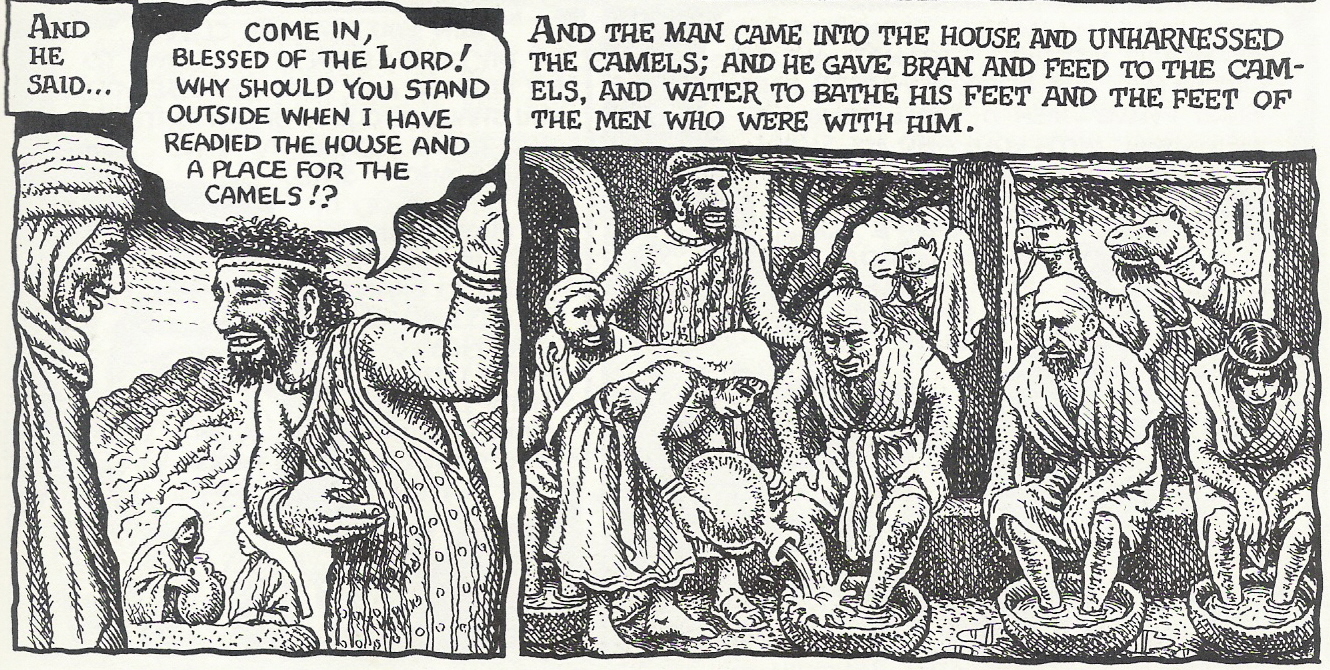 This is very much in keeping with matrilineal kinship patterns because the brother is in a position of authority relative to the sister and the bride’s mother is the recipients of the bride price. For those familiar with the patrilineal tradition of the father giving away the bride this is an interesting reversal.

Shit gets too heavy for Jacob

In the next story Rebekah gives birth to twins Esau and Jacob. 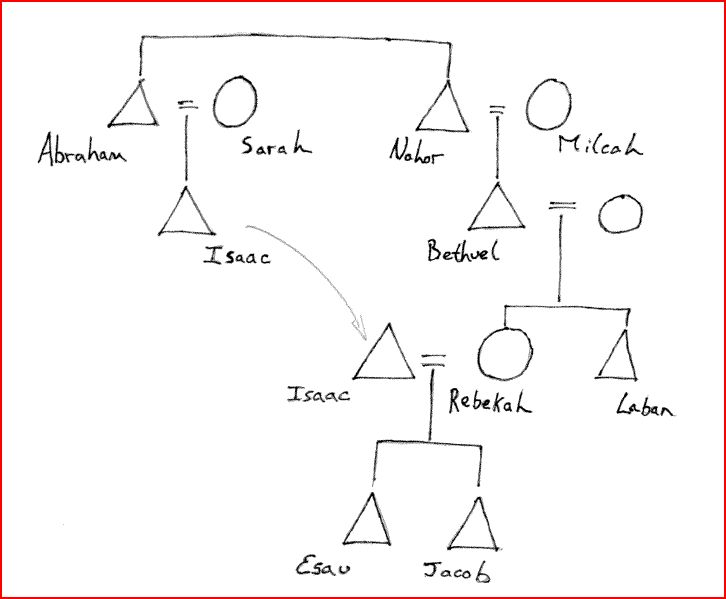 Twin brothers Esau and Jacob are like perfect opposites. Esau is big and burly, he’s covered in manly body hair and is a successful hunter. Jacob is a mild mannered kind of guy, he spends a lot of time indoors working with his mom. The parents play favorites too. Isaac has a taste for game so he loves the first born Esau best, but Rebekah loves Jacob and together they hatch this elaborate plan to divest Esau of his father’s inheritance and God’s blessing.

Once Esau discovers what Jacob is up to, that he has successfully stolen his father’s blessing, he is pissed. He threatens to kill Jacob, which we have to suspect would be no match – this big strapping hunter against mama’s boy. What do you do when things get too hot around the patrilineage? Go take refuge with your mother’s brother!

As members of the same matrilineage Laban graciously receives Jacob as if he were his own son. Laban also appears to be the primary property owner in this land and is probably overjoyed to have gained a new employee for his ranching operation. 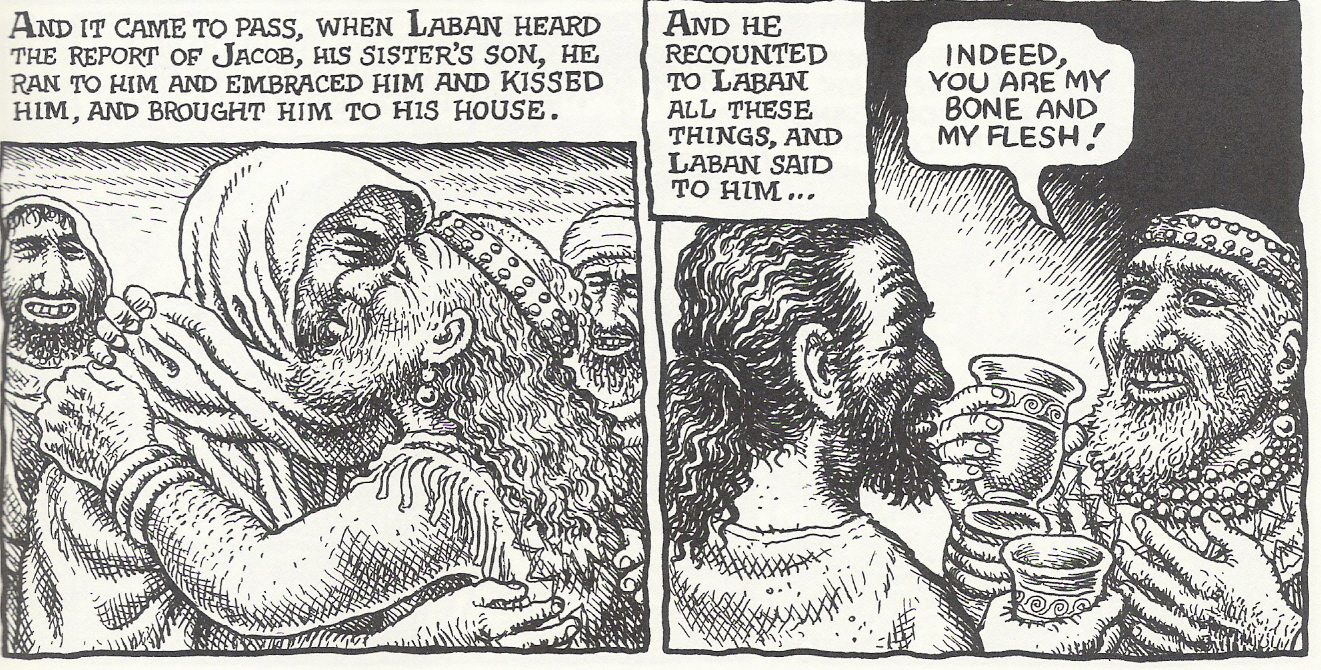 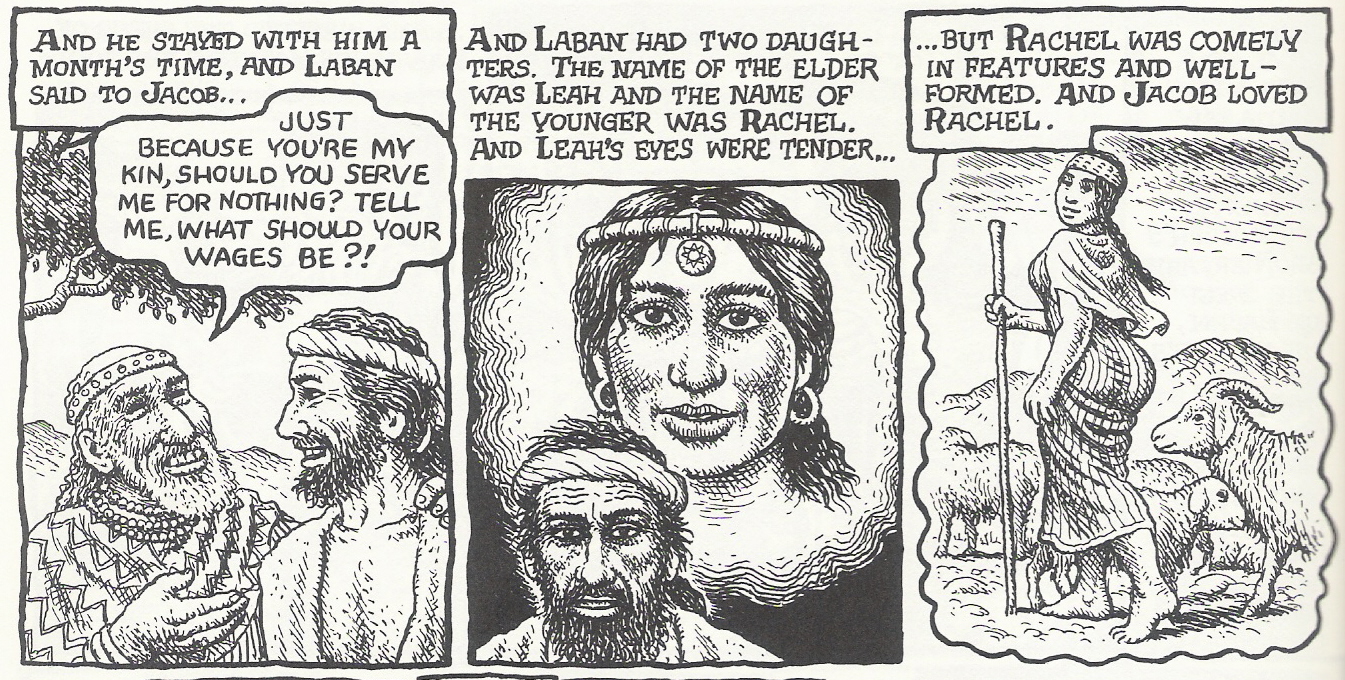 I really like how Crumb draws her with some va-va-voom!

Jacob strikes a deal with Laban. He will work for seven years to pay Rachael’s bride price.

Seven years pass, the wedding is held and Lo! That’s not the woman I thought I married! Are we to take it that the bride’s face was veiled? At any rate it seems Laban has pulled a fast one on his nephew.

Laban feeds Jacob a line about how it is their tradition that the younger daughter should not be married before the elder and he swallows it. Still his love for Rachael is so great that he’s willing to work another seven years to marry the other sister! This double cross comes back to haunt Laban in the next story. 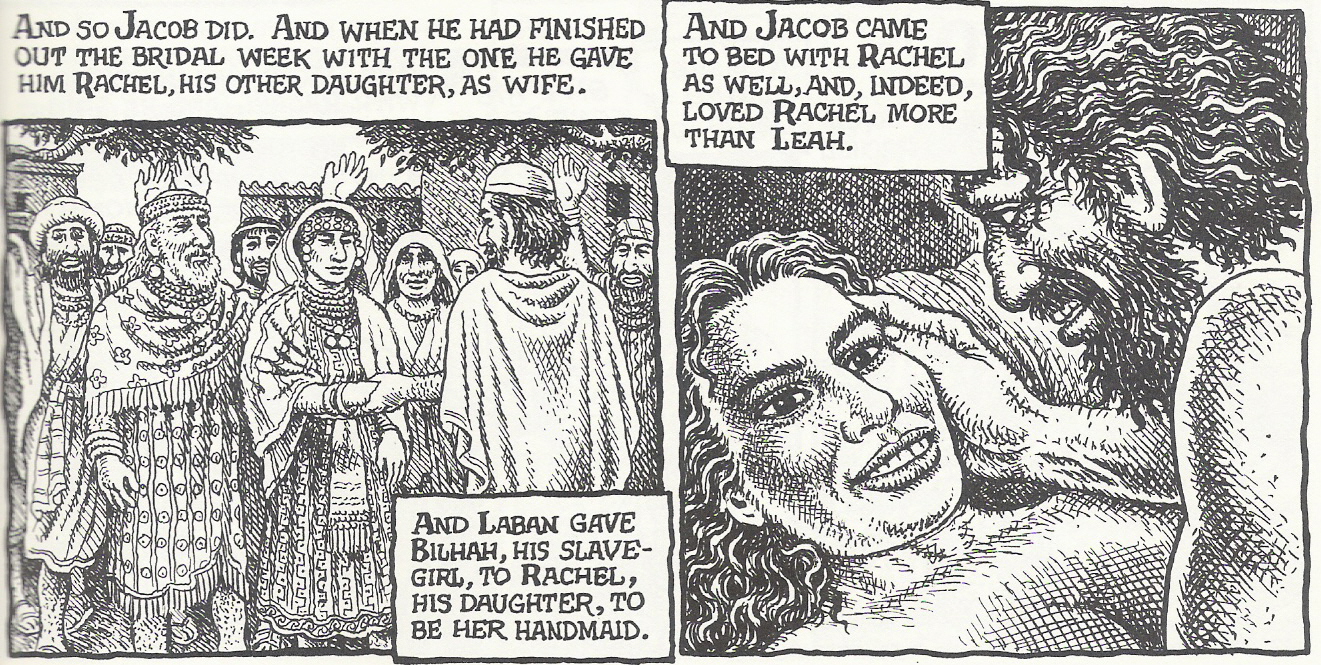 Now Jacob is nestled in real tight with this matrilineage. Having married sisters this insures that all of his children from either wife will be on the same team.

The sisters side against the father

It seems like things are going pretty well for Jacob now. After overcoming some trickeration from his uncle/ father in-law, Jacob’s wives are blessed with many children. He even seems to benefit from a little sibling rivalry between the sisters as they give to him their handmaiden’s much as Sarah gave Hager to Abraham. 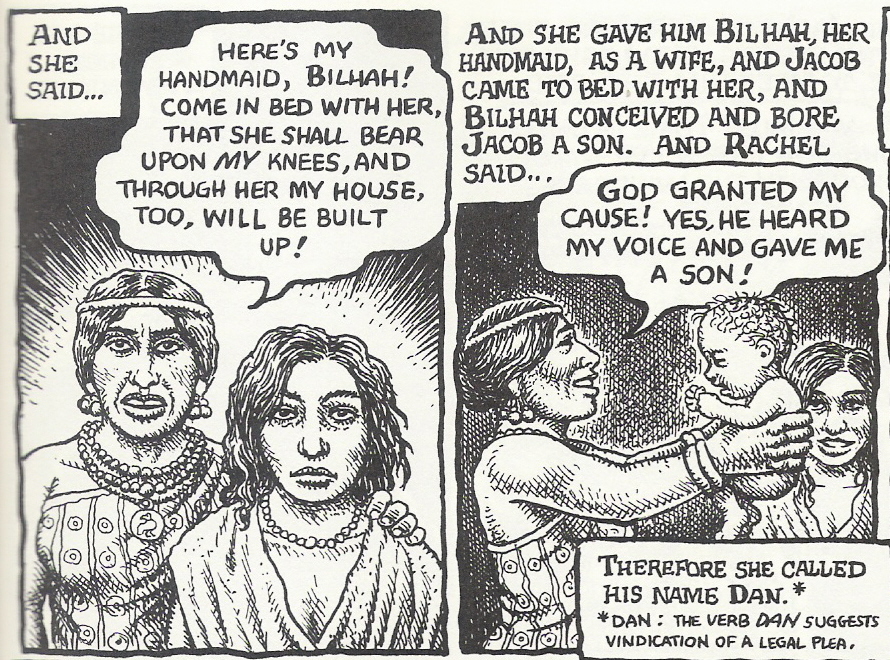 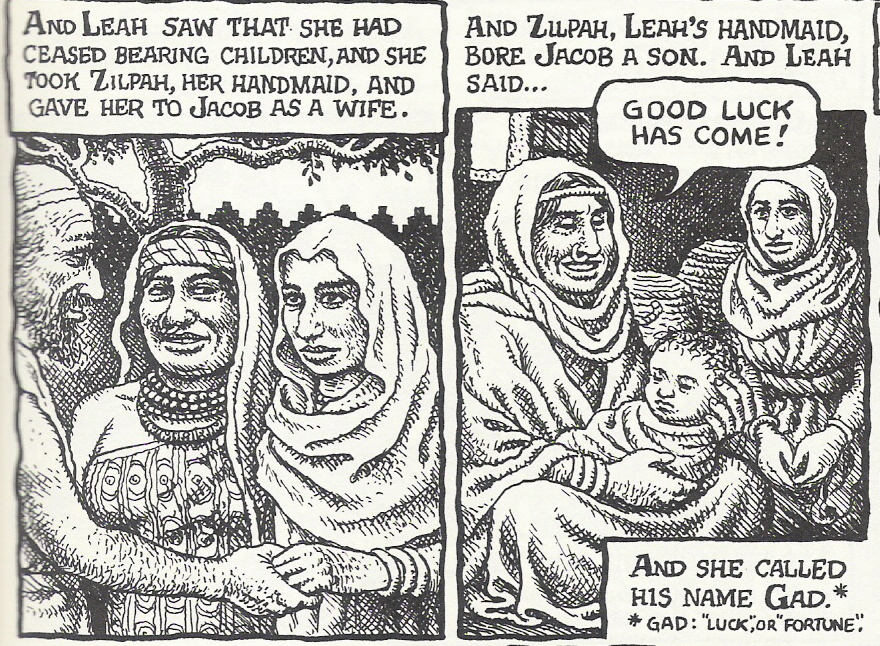 By this point in the story Jacob has been in Laban’s house for many years and the fact is not lost on him that his labor is making his uncle wealthier at his own expense. Not unlike the plot to defraud Esau of his inheritance Jacob conceives of an elaborate conspiracy to fleece Laban of his flock and then flee back to the land of his father, Isaac. And just as he needed his mother Rebekah to execute the last heist, he needs the assistance of Leah and Rachael. When he shares his plans with them Jacob finds he has no trouble at all turning the sisters against their father.

So the plan is put into action and Jacob looks to make off with most of Laban’s herd. When Laban discovers the deal is going down he runs out into the field to try to put a stop to it. With Laban out of the house Rachael sneaks back in and steals some of his household idols. This only infuriates Laban more and Jacob gives him permission to search their tents to recover his idols unaware that his own wife has taken them.

Then there’s this fascinating scene where Laban storms into Rachael’s tent. Taking the idols and hiding them under some blankets Rachael sits down on top of them and pretends to be on her period. Laban retreats. The matrilineage has succeeded in appropriating the domestic gods. 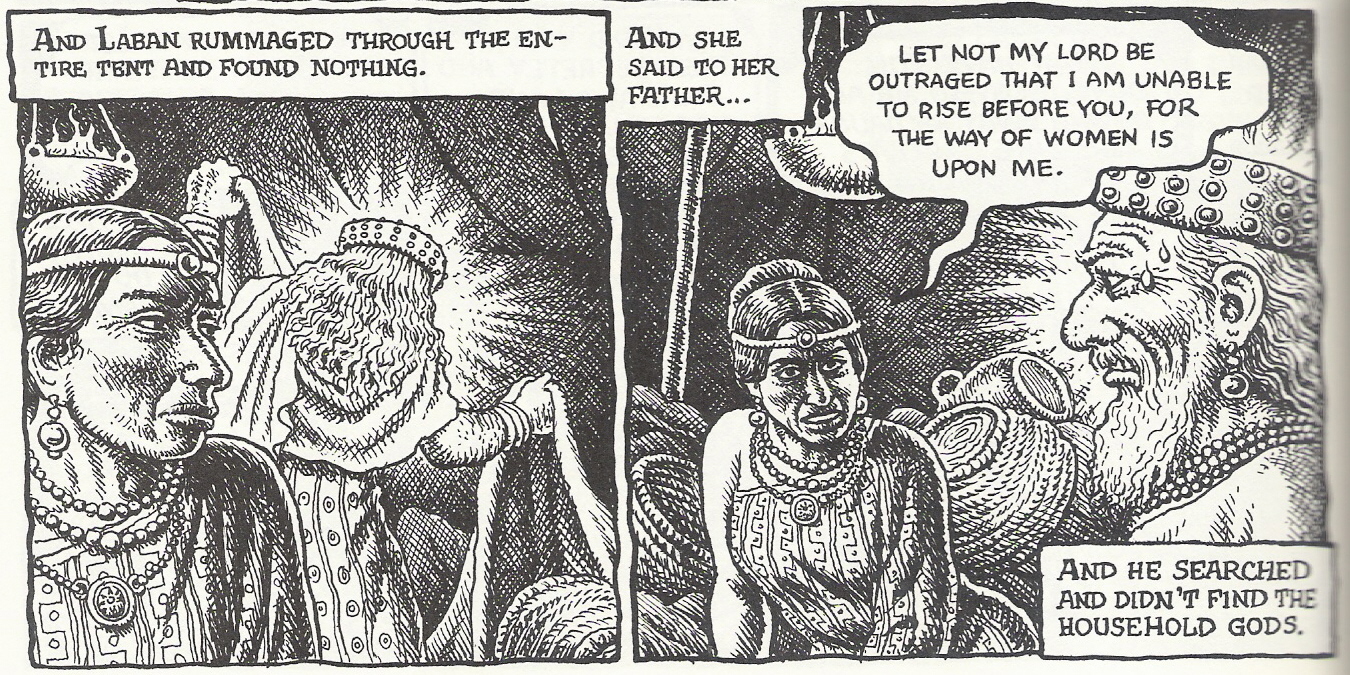 Dinah is raped and the matrilineage sides against the father (again)

Like I said there’s not a whole of stories in Genesis with prominent female characters, but there is one more that will serve our purposes here. After Jacob deserts Laban and reconciles with Esau he becomes a successful patriarch and keeper of flocks. 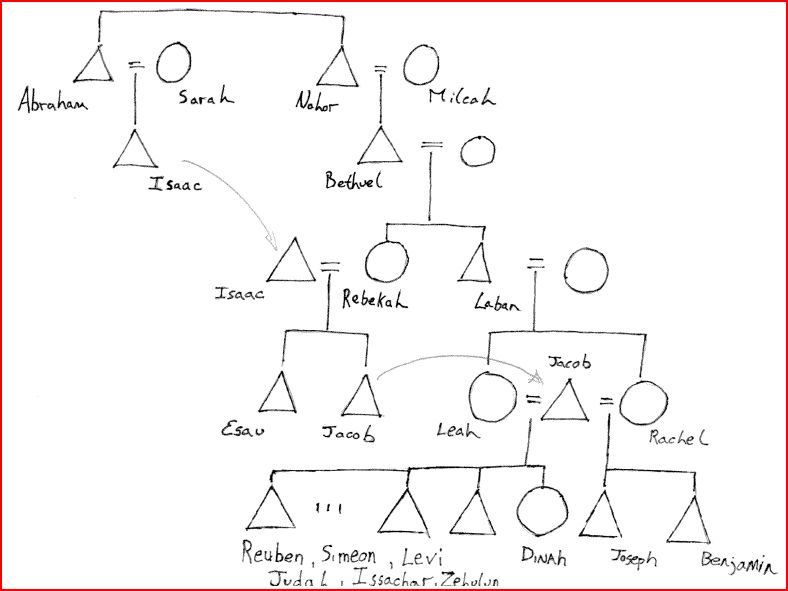 Being that he’s married to sisters all of his offspring would belong to the same matrilineage. Here we are interested in how Dinah’s brothers react to her assault by Shechem Prince of the Hivites 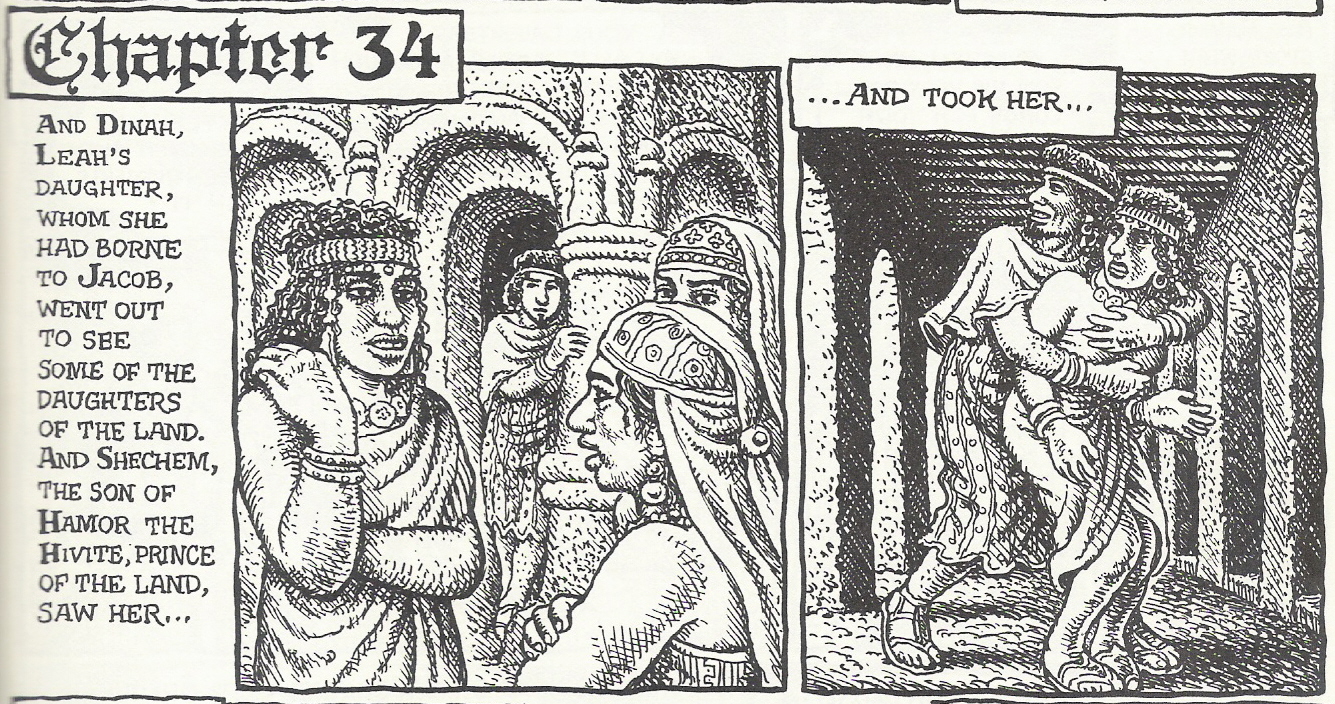 Not cool Shechem. You’re supposed to marry the girl and then take her virginity. Not the other way around!

Hamor, his father, knows he son has screwed up and so the two of them head out to Jacob’s camp to tray and make amends. But in the story Jacob the father of Dinah “keeps his peace” and instead her brothers take charge.

I love this scene because its like something right out of Levi-Strauss. Here are two groups of men engaged in politics using women as a tokens of exchanges.

Dinah’s brothers have other ideas, however. Remember, these guys are Hebrews. Its unacceptable to them that Shechem would be uncircumcised. Eew, gross! There is no way you are touching our sister. Unless… snip snip. 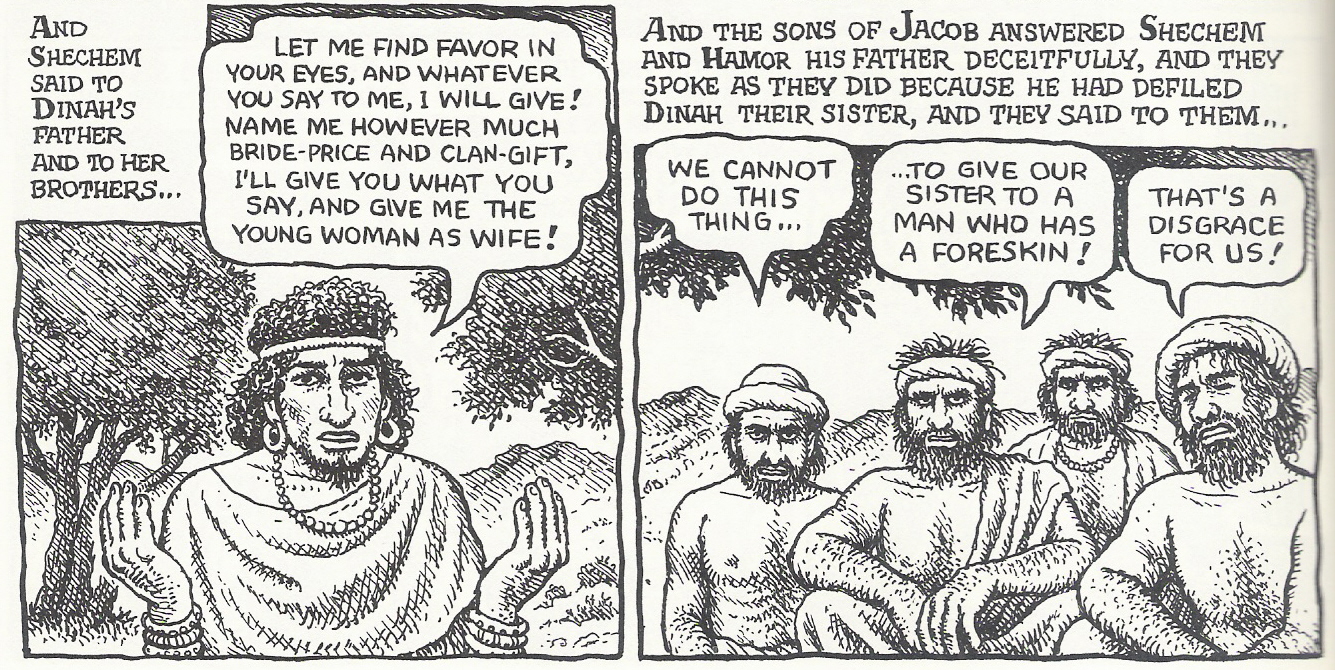 Have you guessed that this is leading up to an elaborate conspiracy whereby one group exacts revenge on another? Good for you! The brothers convince Hamor and Shechem that they will exchange women and build up their alliances if they have all the men of their village circumcised simultaneously. Then while the Hivites are convalescing from their wounds Dinah’s brothers come in and KILL THEM ALL!!

When Jacob hears about this he is pissed. 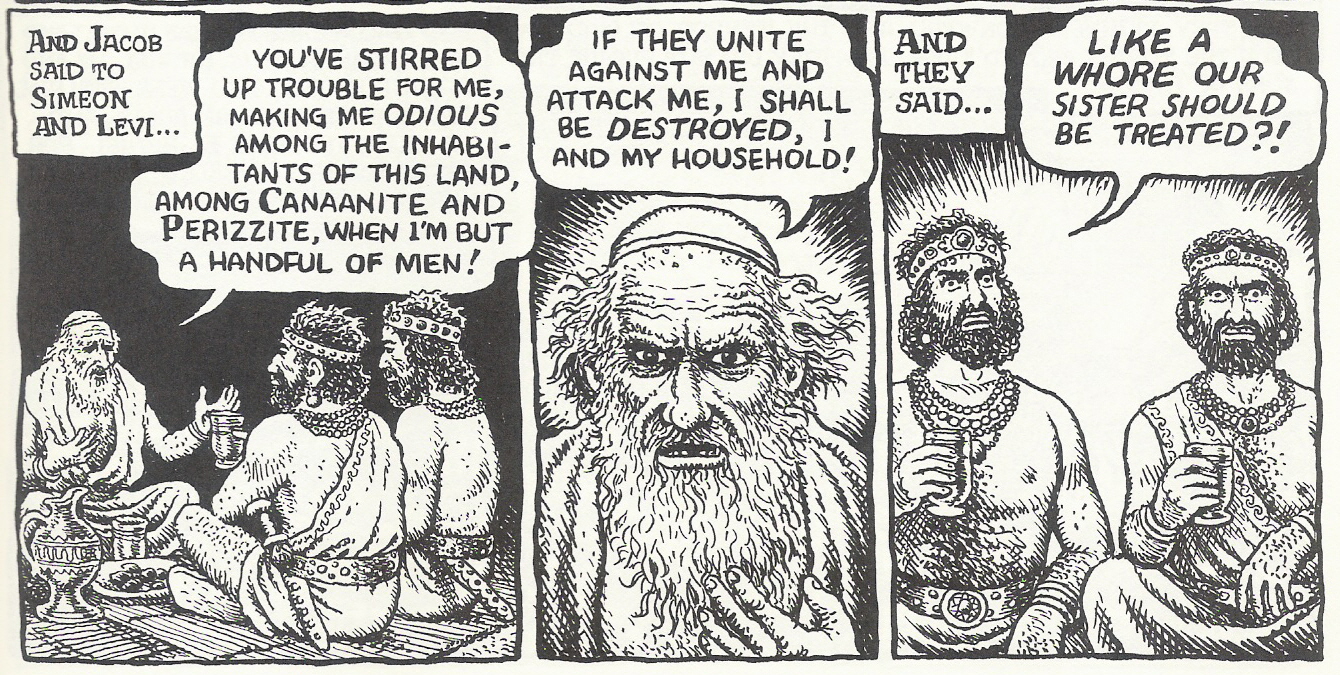 Guys, he seems to be saying, you’re making me look really bad here. But its too late. The matrilineage has sided against the patrilineage yet again.

I hope you enjoyed this. My plane is boarding so I’ll have to leave it here. Happy Mother’s Day! I love you mom!

11 thoughts on “Matrilineal Patterns in the Book of Genesis”