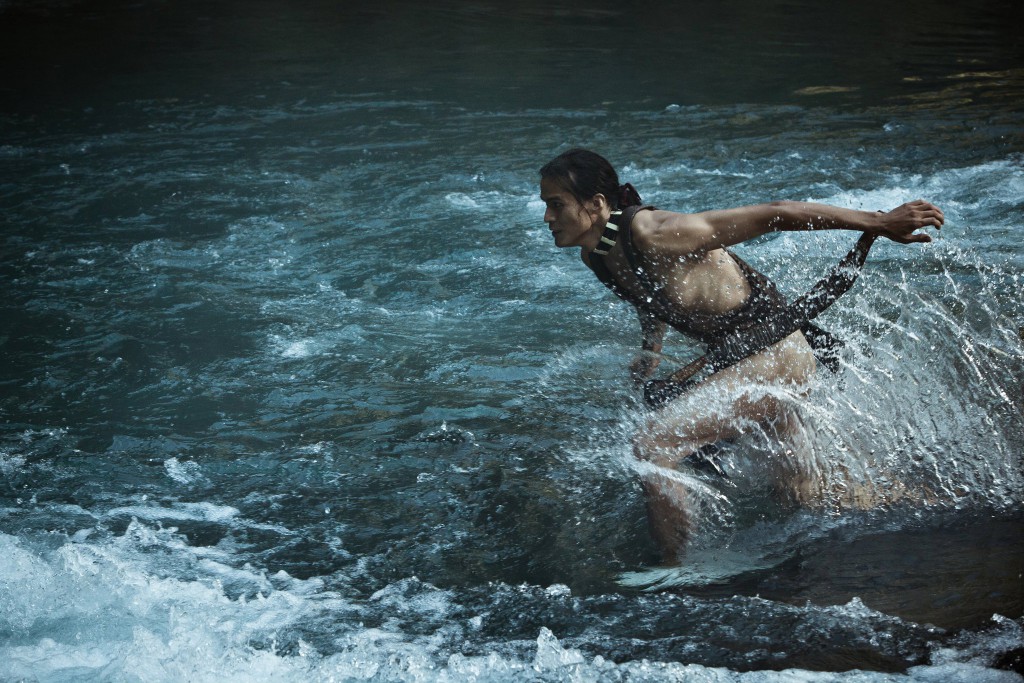 Seediq Bale is the biggest Taiwan film ever and the story of an indigenous resistance (against the Japanese in central Taiwan in 1930). As such, it reminds one of Avatar. Having spent many childhood nights reading Call of the Wild to the light of the moon, and many days in early adulthood reading Joseph Campbell – the great Primitivist and Orientalist – I’m embarrassed to admit that I came out of Avatar starry-eyed; Avatar is calculated to appeal to people like me with a “primitivist” tendency. It speaks, in a highly commercialized, packaged, unthreatening and, on second and third viewings, irritating way to longings in the wayward heart of modern man. Seediq Bale, for everything else that one might say about it, speaks to those same longings. 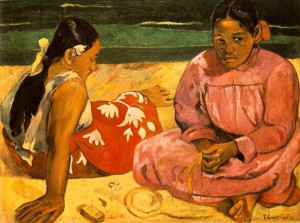 Primitivism was originally a current in Modernist art. It’s been accused of complicity with colonialism. Gauguin painted girls in the South Pacific. Part of primitivism was western artists looking at indigenous girls. If that’s all there was to Primitivism one could dismiss it as colonialist decadence, but there’s more to it than that. There’s primitivism in D. H. Lawrence and Yeats, neither one a colonialist. According to Marianna Togorovnick, there’s primitivism in lots of seminal thinkers and interesting lives, from Carl Gustav Jung to Diane Fossey. Intellectually, primitivism can be a critique of individualist rationalism, while emotionally it’s a longing for a more natural and vital existence. 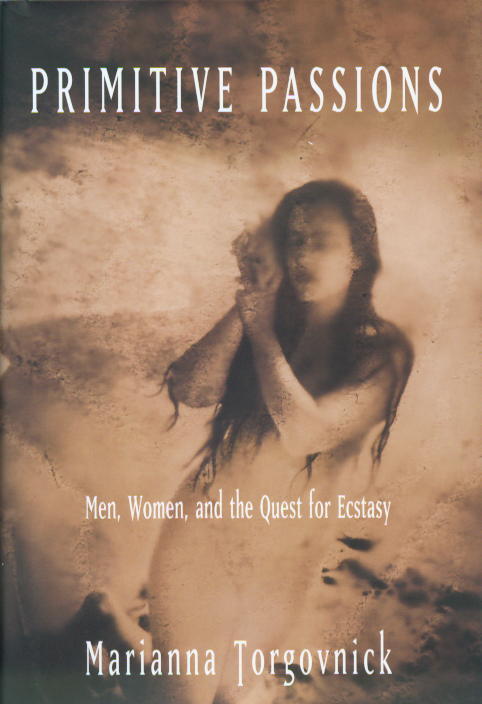 While we wait in line, chew our nails, fill out forms, surf the internet, we think that the actual jungle would be a more exciting place to live than the concrete jungle. We imagine that “primitives” were closer to their bodies, to one another, to animals, to nature, and to the cosmos than we are. Not just closer, but at one with; Togorovnick writes of ecstasy, not of sexual pleasure but of “standing outside” oneself, of mystic participation. Togorovnick connects ecstasy to the Freudian death wish, which from another perspective is a life wish: the monad dies and is reborn as part of the whole. Maybe in some sense all films, and all fiction, through the suspension of disbelief, give us a kind of ecstasy. At their best, Seediq Bale and other primitivist films allow us ecstasy through an idea of the aborigine. Avatar degenerates into a love story, but the group yoga sessions are ecstatic communion, the gamer premise of the “avatar” is ecstatic, and true love is potentially ecstatic as well. Neither anthropologists nor mystics will be terribly impressed by the film-going primitivist, who only has to fork over 10 bucks and a few hours of his or her time. But for most people that’s as close as we get.

Maybe the director of Seediq Bale hasn’t really gotten all that much closer, but he’s at least more imaginative than most people. At least based on his published writings, the director, Wei Te-sheng, seems to be a primitivist. Long before he was famous, Wei Te-sheng released a book about being an out of work director. In it he whines about being out of work. He’s just as good as other directors; why has success passed him by? In and among the whining is some first rate complaint about modern urban life, about the noise, the boredom, the monotony, the waste, the ugliness, the rationalized insanity of Taipei. Wei complains about the people too. The modern city is supposed to be democratic but is actually full of drones. Wei Te-sheng sounds like a romantic, but anyone who takes a trip into the Taiwan countryside will see that it has a lot of the same qualities of the city. To get away from the city Wei Te-sheng had to go into the mountains and into the past. There he found people he wanted to identify with, men like giants, seediq bale, the “true people” of the title of his film. 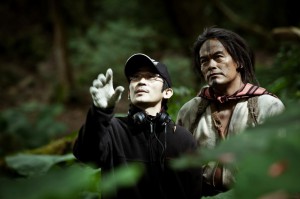 So how do the larger-than-life Seediq aborigines in Seediq Bale seem closer to their bodies, one another, animals, nature, and the cosmos? First of all, the Seediq in the film have wonderful bodies, all the more impressive given that they are real people not the CGI creations of Avatar. These are about the most impressive film aborigines I’ve seen. They don’t run around the mountains barefoot at several thousand meters above sea level like the Seediq aborigines used to do, but they’re in pretty good shape. They cover their bodies in clothing that would once have been made by hand by members of the local community. They look better in my eyes than any urbanite, from the guy who wears mass produced polyester to the metrosexual. They don’t have body image issues, and they don’t follow fashion.

Second, they’re closer to one another. I don’t want to resort to the cliche of communal life, but it seems apt. In the film the Seediq live in small houses in small villages. The door’s not locked, and it’s not even closed most of the time. Though fiercely territorial they don’t have private property. They hold goods in common. They drink together very lustily out of the same cup. They feast together. They dance together. They live with ancestors and enemies, literally. Each household has got a collection of skulls, of family members and victims of the headhunt. This sounds morbid, but also strangely intimate. Family members appear as visual or auditory hallucinations. The Seediq are never alone.

Third, to animals, on whom they depend for food and company. The opening scene is of a boar hunt, and it’s just like the beginning of Apocalypto. The hero of the film Mona Rudao has a CGI bird familiar that appears a half dozen times in the course of the film, to say nothing of his pet dog.

Fourth, to nature. To begin with, almost all Seediq production and consumption in the film is local, dependent on the familiar environment. They buy salt from the local Chinese trader, but the salt probably came from somewhere in Taiwan. The landscapes in Seediq Bale are sublime. The sublime, since the 18th c., has been in poetry and painting a safe opportunity for ecstasy. Kant analyzed the sublime into static and moving, but the idea was basically that your rational mind was overwhelmed. Rationality sometimes seems overrated, or at least it can’t be the whole of experience. Less than a century after Kant approached the issue analytically, Nietzsche celebrated the Dionysiac over and above the Apollonian. The closest I get to the Dionysiac is the sense of “shudder” I get from literature once in a while, and now and then the nature scenes in Seediq Bale afford a similar thrill: when Mona Rudao’s up on the mountaintop singing to his ancestors, or when he sings a duet with his father by the waterfall as a rainbow appears. Those familiar with the Japanese aesthetic tradition may find the scenes with the sakura blossoms, so reminiscent of the color of blood, similarly sublime.

Mona on a mountaintop

Mona at the waterfall

The Japanese aesthetic in Seediq Bale

Fifth, to the cosmos. I write as an atheist who’s occasionally had a sense of awe at the heaventree of stars or the Dao but is usually too busy translating and tending my garden. The aborigines in Seediq Bale have a living religion, and as I understand it one of the purposes of religion is to give a sense of the cosmos. The Seediq believe there’s a rainbow bridge, and if you cross it with the tattoos that prove adulthood you’ll reach a happy hunting ground. In his unemployed director book, Wei Te-sheng is in awe of the power of Seediq belief. It’s “the power of belief” that gives the warriors the courage to go on the headhunt and to slaughter the Japanese. This makes the Seediq aborigines sound a lot like terrorists…I suppose I don’t know enough about terrorists to comment further, but my almost completely ignorant hypothesis would be that terrorists don’t usually imagine that they’ll be on friendly terms with, or at one with, their enemies after they blow them up. The Seediq did. They performed atonement rituals after the headhunt and the former enemy became an intimate friend.

The Western intellectual’s typical response (i.e. my own typical response) is to analyze, and that’s what I’ve done above, providing an analysis of ecstasy. I could try to sum up discursively, but the power of Seediq Bale is in images. So, in lieu of a conclusion, I’ll finish with two of my favorite visual moments in the film. One of the problems with Avatar according to Slavoj Zizek was that visually and narratively it borrowed too much from other films, that it was a pastiche not a work of art. I can tell that Wei Te-sheng’s watched Apocalypto, but the following two scenes seemed original.

Mona Rudao, the future leader of the resistance and already a legend, is in front of a huge pit filled with skulls. When ordered to throw the skulls from his own collection in with the rest, Mona attacks a Japanese soldier and falls with him onto the pile of skulls, and other Japanese soldiers fall on top of them to restrain Mona, whose face is placed up against the skull of an ancestor. This was the beginning of the subjugation of Mona and the Seediq people. The Japanese forced modernity, in the form of prostitution and wage labor, upon them. As the film very obviously tells us, after Mona’s resistance, the Japanese reprisal, involving poison gas, was more savage than savage, that there’s savagery in the iron heart of industrial modernity.

You couldn’t blame the Seediq aborigines for not wanting to enter this brave new world in which everything and everyone is, through the global division of labor and the modern spatial regime, alienated. As presented in Seediq Bale, the Seediq worldview was not one of spatial and temporal separation, but of communion in space and time. The Seediq women, also true people, seediq bale, chose communion over separation. Their fate has been forced upon them by the Seediq warriors, but they love their fates. The beleaguered Seediq have nearly run out of food, and so the women decide not to be a burden. They hang themselves en masse, according to Seediq custom, hoping to join the ancestors. They’ll soon be joined by the warriors. They hang themselves from branches in a secluded grove, in a scene that blends horror with beauty.

In its combination of the lyrical and the terrible Seediq Bale is not simply entertainment, a break from the tedium of modern life. At its worst, Seediq Bale, at four and a half hours, half the time battle scenes, is another kind of tedium; but at its best it draws the individual viewer outside of himself, however fleetingly, in the manner of primitivist art.

4 thoughts on ““Seediq Bale” as a primitivist film”