This post is an occasional contribution by Futuru C.L. Tsai. Futuru recently got his Ph.D. in July 2010 from the Institute of Anthropology at National Tsing Hua University in Taiwan. His dissertation is entitled Playing Modernity: Play as a Path Shuttling across Space and Time of A’tolan Amis in Taiwan. He was a training manager in a semiconductor corporation originally but quit to pursue a Ph.D. in anthropology. Futuru is also an ethnographic filmmaker and writer, who has produced three ethnographic films including Amis Hip Hop (45 min, 2005), From New Guinea to Taipei (83 min, 2009), and The New Flood (51 min, 2010), and a book: The Anthropologist Germinating from the Rock Piles (Shiduei zhong faya de renleixuei jia) (Taipei: Yushanshe, 2009).

A brand new music album with complete Amis lyrics by the Amis artist, Suming, was released in May 2010. It is not the first Amis music album but is the first one attempting to crossover into popular music market in Taiwan, combining indigenous melodies such as Amis polyphony and flutes together with techno-trance, hip-hop, and Taiwanese folk music. Among these songs, “Kapah,” which means “young men” in the Amis language, is the theme song. Lungnan Isak Fangas, a documentary filmmaker, who is also an Amis, made two music videos for this album, one of them is Kapah. Both the song and the music video not only represent aspects of local A’tolan Amis culture but also attempt to make this culture appealing to Taiwanese society at large.

There are currently 14 indigenous ethnic groups (referred to as “Aborigines”) officially recognized by the Taiwan government. The Amis is the largest of these austronesian speaking ethnic groups in Taiwan. There are two conspicuous characters of Amis society and culture relevant to understanding this video: One is that it is widely considered a matriarchal society, although its status as such is still under debate. Nonetheless, the image of the mother holds a central place in Amis society. The other one is the age-grade system with its rigid regulations. Age sets are organized around males who have passed the coming of age rites in the village within a given time period. Each age set (kapot) will include men born within a few years of each other. It is the main political unit, handling the affairs of both outsiders and insiders.

The song Kapah differs from earlier indigenous music in its depiction of indigenous modernity. Previous music portrayed indigenous peoples as being close to nature (with lyrics about the sun, wind, ocean, or grasslands) and the accompanying visuals focused on the authenticity of their traditional culture. In both the style of this music video and the song’s lyrics, Kapah seeks to present the Amis as not only modern, but fashionable as well. Suming often says to his audiences: “We indigenous peoples in Taiwan are living in modern times. In the future, I don’t want to have to visit a museum to learn about our culture.” Suming does not want to follow the stereotype of indigenous peoples as living in the past, but tries to connect the past to the present in a uniquely Amis way. His music and art seeks to create a fashion-conscious modern Amis lifestyle.

The music video for Kapah is produced with the same goal of creating a unique Amis-fashion as we find in the song. The music video is a representation of the key concept makapahay, which generally would be translated as beautiful; however the quality of “beautiful” implies many other values: shining, dazzlingly, and vitality. This is because the word is based on the root “kapah” (i.e. “young men”). Therefore, makapahay also can be translated “to be as young men.” The music video adopts feathers as a metaphor for the concept of makapahay. Feathers are the main part of the traditional headdress worn by Amis young men. The flying rhythm of these feathers as the men dance is a way of being makapahay. As for the dance steps, they combine not only the Amis styles but also steps from Korean songs popular in Taiwan, such as “Sorry Sorry” and “Nobody but You.”  And the use of the umbrellas while dancing is regarded as a traditional dance of A’tolan Amis, called kulakur – a guardian dance performed by the young men. Traditionally spears were used, not umbrellas, but it is said that Japanese colonial authorities banned spears, afraid that the Amis would use the weapons to resist Japanese rule. While this story is unverified, one thing can be confirmed is that it must be decorated with colorful ribbons to express makapahay not only because of the brightness of the ribbons but also the flying movement made when the dancers jump and fall. 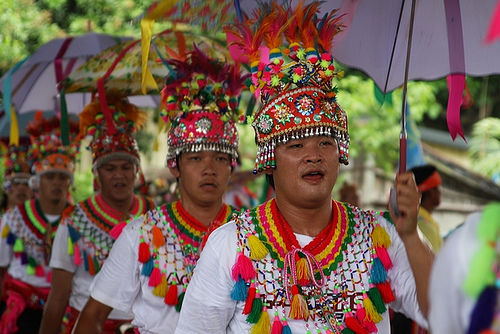 Another noticeable way in which the music video tries to package the Amis traditions in modern fashion, are the depictions of the male age-grade system (kapot) and the of mothers. In the music video, Suming invited his mother and all his mother’s sisters to join the performance to dance the steps borrowing from “Nobody but You”, and to present a plot that how they exhort Suming just like the Amis mothers do in daily life. The Amis age set system is rather unique, especially with regard to the hierarchical relation between the upper and the lower age sets, which is very strict: the lower age set should always obey and respect the older one, and the upper age set should always take care of the lower one. In the music video, a teenage boy is shown about to serve a cup of alcohol to his elder brother in the Amis way, but when another elder brother appears behind him the seated brother stands up and himself serves the alcohol to the newly arrived elder brother. Finally, the eldest brother (portrayed by me in the music video) comes in and the preceding person has to stop drinking and serve the alcohol to him. This sequence eloquently epitomizes the relationship between the age sets. In Suming’s home village, A’tolan (Dulan 都蘭 in Mandarin), on the east coast of Taiwan, such age set practices are still an important part of both daily and ritual life. [Editor’s note: Although he is not from A’tolan, Futuru was adopted into the local age set system.]

Without a doubt, the song Kapah and its music video mark a seminal moment in the history of indigenous music in Taiwan. Mainstream music here is heavily dominated by Mandarin, Taiwanese, American, Japanese, and Korean popular music. When Suming proposed a pure Amis music album to his record company, the boss was just afraid of the Amis music would be unable to compete. Suming argued that there was at least as much of a market for Amis music as their was for French music. Taiwanese don’t understand French, yet French albums are still successful here. Moreover, Suming argued that it was possible to create a fashion trend for things Amis just as there exists for things Japanese, Korean and American. Perhaps it could even find an audience outside Taiwan, on the world stage. (The lyrics of each song has Chinese, Japanese, and English translation in this album). Suming’s hope is that by making Amis culture fashionable, young Amis would be drawn back to their own culture, and take up learning the language and traditions.

The English translation of each song in Suming’s new album.

Indigenous languages in Taiwan are endangered languages; most members of the younger generation cannot speak or understand their mother tongues. Most young and middle aged Amis must migrate far away from their home villages in search of work and more and more young Amis are losing the ability of speaking Amis. The reasons are complicated, including official language policies which suppressed  indigenous languages as well as the rapid industrialization of Taiwan. If Suming can make Amis culture fashionable, the fans will be eager to learn Amis language just like fans of Japanese, American, and Korean fashions do.

I believe that Suming and Lungnan Isak Fangas are engaged in an alternative form of cultural activism, trying to break the rigid stereotypes of indigenous cultures in Taiwan in order to revitalize Amis language and music. But popular culture is not just about fashion, it is also about sales, and in the end capital. Unfortunately,  these artists have yet to make a significant profit for their work. Still, I still admire what they are doing and I also believe that as long as they keep showing their talents either on music or film, the drops of water will one day wear down the stone.

I hope so, because, I consider myself a “fan” of Amis culture.