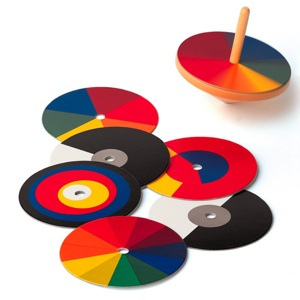 The title of this post comes from a 1930 article in Man which discusses the superiority of such tops over various other ways to measure skin color, such as Broca’s skin color charts. While I knew anthropologists had used Broca’s charts, I don’t recall reading about the use of color tops, which was apparently quite common. The tops used were actually by Milton Bradley, but as best I can tell they were quite similar to the Bauhaus design pictured above. [Can anyone find a picture of the actual Milton Bradely tops?]

The colour top is a device made by the Milton Bradley Company, of Spring- field, Mass., U.S.A., a firm which manufactures kindergarten supplies. It is, primarily intended for teaching children the principles of colour blending. The first investigator to use it for recording skin-colour was Davenport, who employed it in his study of the heredity of skin-colour in Negro-White crosses in Jamaica (1913). The principle is one with which we were all familiar in our childhood. The apparatus consists of a small top, of the disc variety, spun by means of a wooden spindle kept in place by a nut. On this basal disc, which is of cardboard, are placed paper discs of various colours. When the top is spun the colours blend… The proportion of each colour which goes to the make-up of this composite surface can be varied at will, by merely moving the discs round upon the spindle… By suitable adjustment of these four discs, the spinning surface can be made to reproduce,with a considerable degree of exactitude, the colour of human skin of all shades and gradations that may be met with.

The judgment must always be made while the top is rotating at full speed. Even slight slackening of speed renders matching difficult and the records unreliable.

I learned of the use of these tops from an interview with Michael Keevak, author of Becoming Yellow: A Short History of Racial Thinking. It sounds like another interesting book from the man who wrote The Pretended Asian: George Psalmanazar’s Eighteenth-Century Formosan Hoax, which I blogged about back in 2006.