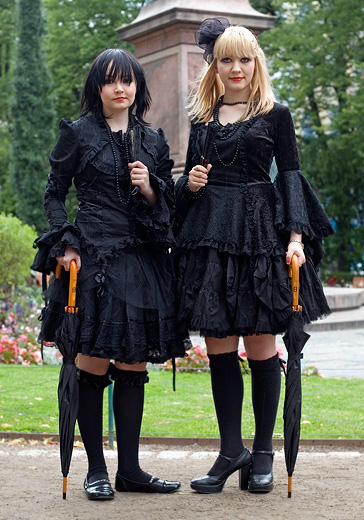 OK, people. I know there are readers of this little blog all over the world. Let’s find out what’s going on. Let’s hear some buzz, some chit chat, what the talk of the town is, what’s bubbling under… I know we have regular visitors in Japan, Taiwan, Australia, Finland (natch), Egypt, India, Senegal, the UK, Hawaii, and…. Vegas. So what are people talking about where you are? What’s on the news? What’s playing on the radio? What are people wearing? What sex scandal is rocking the upper echelons of government? How often do you see hacked iPhones? Where are the cool kids hanging out? I’ll start:

In Helsinki, they hang out at a giant mall/bus-station complex called Kamppi. This suits me very well, since this is in fact my main hang out too. I feel like I spend most of my life buying groceries and waiting for the bus in this place. This means that I spend a lot of time watching the children and their get ups. Helsinki kids are fiercely devoted to over-the-top looks, in particular goth (this pic is from my favorite local website; the goth stuff, as here, sometimes shades into Harajukuism; Finns seem to love Japanese design cues, and vice versa actually: I understand that Moomin trolls are huge in Japan) and metal. Anyway, in the last several months I have noticed a distinct, and now overwhelming, shift toward a particular kind of costume, synthesizing Helsinki’s hard rock (&/or black metal) ethos with transnational 80s mania: Hair metal is huge. The kids at the mall are now completely decked out in Mötley Crüe gear, with ratted hair, eyeliner, the whole bit. So the mall, especially on Friday nights, is basically utterly mobbed by 14-year-old Nikki Sixx’s, many of them drunk. It’s good times.

Meanwhile, for several weeks the country was gripped by a sex scandal involving dirty text messages the Foreign Minister was obsessively sending to various women who really didn’t want to receive them. He eventually was replaced, but the scandal apparently continues because there is a court case involving the right to publish said messages in newspapers. One friend reported that on a radio discussion she heard, two interpretations were offered of the scandal: (a) a new moralism is taking over Finland or (b) Finland is finally becoming civilized. And then there is the issue of the invasion of beggars. Panhandling is virtually unknown here, so last summer when there were just a few on the streets, they seemed to dominate headlines. The country is bracing for the arrival of folks with the temerity to ask for money in public.

Plus, Luis Vuitton just opened a store. OK! So that’s some Helsinki buzz. Tell us something about where you are… 🙂