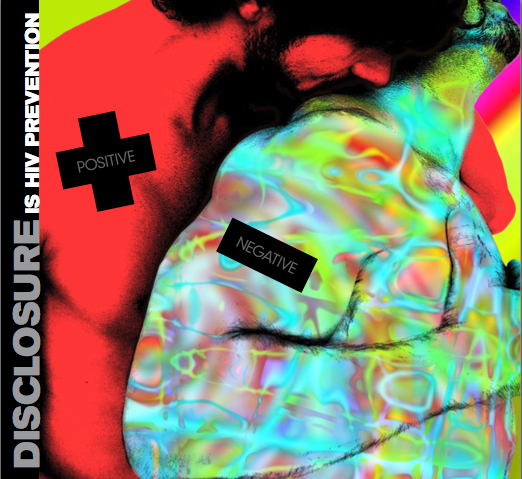 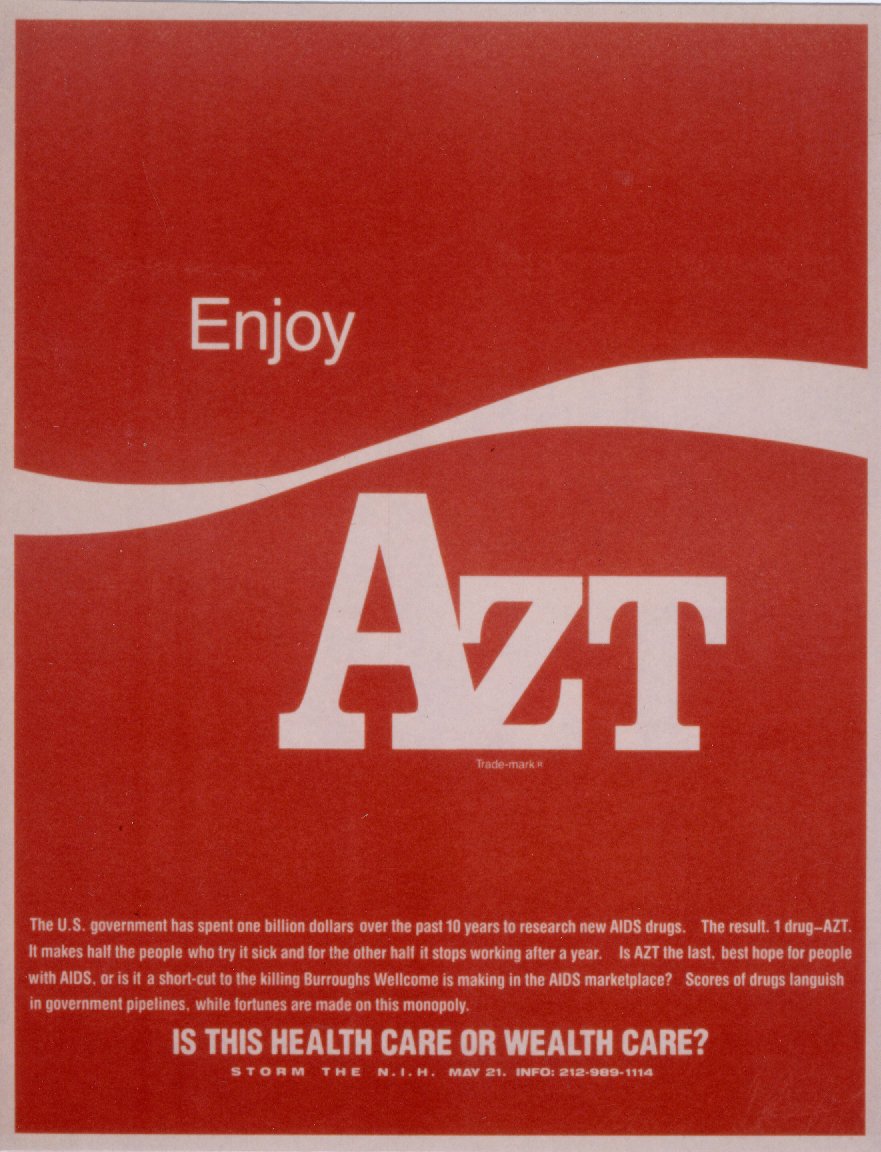 Earlier on Savage Minds, I asked about contemporary shifts in the symbolism and sociality of HIV/AIDS — a global epidemic. The question concerns me as someone who found himself along with other members of ACT UP, in the early mid-90s, in places like the parking lot of the Astrodome yelling at delegates to the Republican National Convention about funding for healthcare. It concerns me as someone who, in the late mid-90s, was employed as a professional ethnographer (!) tracking social knowledge related to sexual risk in San Francisco. These days, I am interested in the meaning of HIV and the ways in which that meaning is mediated and manifested specifically through what might be called technologies of public persuasion, whether they are relatively complex, such as social marketing campaigns (on the left above), or fairly simple, such as political protest posters (on the right).

A pointed exchange of sorts in the pages of Anthropology News last fall highlights the role that anthropologists are playing in ongoing efforts to respond to–and shape–the HIV/AIDS epidemic and its meaning today. An initial article (read: puff piece) lauded the research of Ted Green, who has worked closely with the Bush administration on its AIDS strategy. Green has embraced ‘risk elimination’ programs for HIV prevention — especially those that (according to Green) primarily prioritize abstinence and partner reduction over condom use and education. By his own account, this represents a paradigm shift in thinking on HIV prevention:

Green believes that the transformation of his maverick and unorthodox ideas into official US policy has been nothing short of groundbreaking.

The article works hard to place Green gingerly in between ‘fashionable academic anthropology’ and the conservative government he apparently works with quite closely, despite being a Democrat (we read of him on a private trip to Africa with CEOs of major pharmaceutical concerns and top Bush administration officials). Green sees Uganda’s famous ‘ABC’ approach as reflecting an ‘indigenous’ Ugandan response to AIDS, and apparently he emphasizes the need for HIV/AIDS agencies to take into account local perspective(s). His political party affiliation notwithstanding, Green’s research is embraced by the right wing of the political spectrum.

Douglas Feldman and Tom Boellstorff each published sharp letters in response to the AN piece.While Feldman details the failures of Bush’s policies, Boellstorff criticizes Green’s notion of ‘risk elimination’ and his simplistic model of indigenous point of view. Boellstorff writes:

Green’s notion of ‘indigenous prevention models’ is rooted in an incorrect understanding of cultural relativism. The notion of ‘the indigenous’ upon which Green relies, and which was disproven by ‘fashionable academic anthropology’ a couple decades ago, presumes a singular ‘indigenous perspective’ and ignores inequality and culture change. What if the supposed ‘indigenous worldview’ is that women are inferior, or homosexuality a foreign import? What appear to be ‘indigenous worldviews’ may be shaped by colonialism, reflecting the values of, say, Victorian England.

As it happens, the question of ‘indigenous’ models for prevention is on the minds of the gay men of San Francisco. A risk reduction strategy known locally as ‘serosorting,’ a prevention model that ‘organically’ emerged within SF’s gay sexual subculture, has received the imprimatur of municipal health authorities. Serosorting consists principally in sex partners disclosing HIV status and then sticking to partners of the same status. One of the main reasons for this ‘sorting’ is so that men can engage in what is known as ‘unsafe’ sex while reducing the actual risk of transmission from a positive man to a negative one.

Here, indeed, is a paradigm shift in prevention. Boellstorff and Feldman intimate that Green’s (and by extension, the U.S. government’s) picture of Ugandan policy performs a problematic slippage between local (‘Ugandan’) emphases and U.S. derived conservative imperatives, so that what Green trumpets as ‘groundbreaking’ prevention is actually U.S. conservative ideology in disguise. But in San Francisco, a government agency is openly embracing local forms through which people negotiate risk. The idea is not without it’s detractors. I bullet some considerations:

These are just big developments that spring to mind — I’m sure there are others and I invite commentary.

If every articulation of knowledge also entails the exercise of power, we here have a set of knowledge-power relations fraught with an exceedingly complex tangle of interests, motives, fears, desires, each of them imaged and elicited through sophisticated semiotic technologies (laws, television ads, fashion, hyperlinks). Knowledge of HIV-status might be positioned as a form of self-care for a community under siege, an ethical imperative that promotes both health and eroticism. At the same time, however, knowledge may come at the expense of increased surveillance. ‘Normalization’ of HIV testing — and the dictate that one know oneself as a subject of HIV (regardless of status) — has all the marks of what we have so fondly come to understand as ‘governmentality.’ Persons emplace themselves on a leveling grid (the postive/negative diagnostic) that subsequently structures their rights, their senses of self, their potential pleasures. Spectres of confinement and incarceration, prosecution and persecution, haunt this self-knowledge that is simultaneously state knowledge. Bodies appear both more robust (medicated) and more fragile (infected), and the lives of the marginalized are metonymized as the cause/consequence of policies that reinscribe their marginalization. Residents of Washington, D.C. are told that HIV testing is a ‘prevention strategy’ — but they are not also told that they will be guaranteed care and treatment in the event that they are sick.

No wonder that some see silence on HIV as a way of resisting, or of relaxing, the tangles of conduct and coercion (and, yes, care) that comprise positive publics. Some activists in San Francisco, for example, are calling for a moratorium on social marketing campaigns directed at gay men. And silence too is a semiotic technology, possibly even a persuasive one. Silence too may be a semiotic technology of a ruthlessly simple kind — especially in worlds where we are incited and seduced, over and over, and in manifold ways, to know ourselves through a virus.

6 thoughts on “Addressing Publics Positively: Some Developments in HIV Prevention”