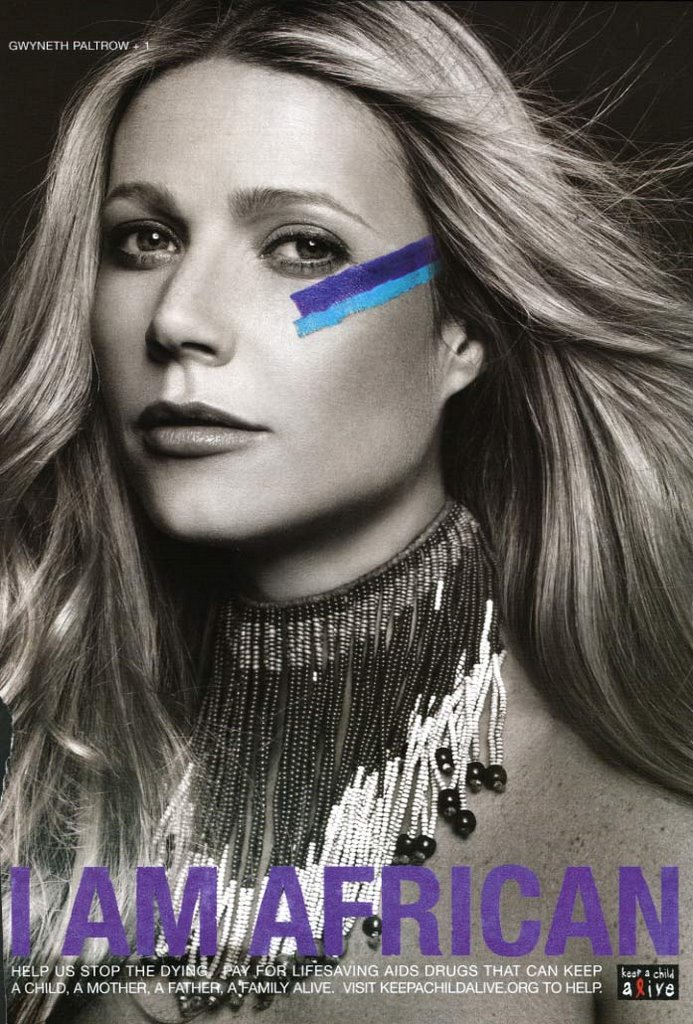 This strikes me as a rather silly/heavy photo: Gwyneth Paltrow with face paint embracing the cause of AIDS in Africa. When I first encountered the “I AM AFRICAN” campaign, it was Brazilian supermodel Giselle making the statement. There is a news story about the campaign — designed to promote a charity that will pay for anti-retrovirals in poor countries — here. Yesterday, thumbing through GQ magazine, I saw Sting proclaiming “I AM AFRICAN,” with golden dust scattered across his face. It’s around.

Earlier on SM, I asked what kinds of persons and publics HIV (as a virus laden with meaning) summons. Here’s one: the sympathetic celebrity in ‘cross-cultural,’ possibly ‘cross-racial,’ drag. To me, this campaign echoes Kenneth Cole’s “We All Have AIDS” campaign for awareness. Some kind of shift has occured, we’re not in the 80s anymore, or even the 90s. People now identify with the virus, people who may or may not have it. Clearly the goal of these campaigns is to combat the stigma associated with HIV so that people might more readily get tested and seek treatment. These days, as one friend reported to me, people without HIV are even wearing “HIV+” t-shirts at international conferences. Is HIV fashionable? And what configuration of fashion/celebrity/global concern has yielded this image? What has made HIV safe for this sort of identification? What does it mean? A few more questions here: to what extent does this imagery hail a public that already has HIV in it? Is the infected public imagined to be elsewhere or is it imagined to be ‘here’? How are people with HIV addressed? To my mind these are important questions for thinking about HIV prevention because campaigns and images like this one exist in a field of messages that also includes calls to get tested and to use condoms, among other things.