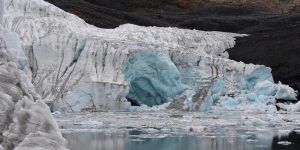 In the 1980s the Pastoruri glacier was one of the greatest adventure tourism destinations in South America. Over 100,000 people visited the glacier annually to mountaineer, ski, and enjoy spending time on one of the most accessible glaciers over 17,000’. But since 1995, Pastoruri has lost more than 50% of its mass, transforming the icy giant into a slushy, overfull lake. To remedy the fact that currently only about 30,000 people visit the glacier each year, La Ruta del Cambio Climático (or the Path of Climate Change) was created in order to teach visitors about the effects of glacial melt. Not surprisingly, it doesn’t quite have the same draw.

The Ruta was designed to use existing, natural features to create a compelling narrative about the diverse effects of climate change on the region. Beginning in the nearby city, Huaraz, the route winds participants through multiple ecosystems — from lower altitude chakras (at around 11,000’), through high-alpine pastures, to the start of the trail just an hour away from Pastoruri’s 17,000’ peak. On the way, guides demonstrate change by visiting endangered climate-sensitive plants, gasified and mineralized lakes now unsuitable for consumption, and slowly disappearing water sources historically used by local communities. Each stop is intended to highlight a different piece of the climate puzzle, all with the same end: this is serious, just look!

At the start of the paved trail where the trek to the glacier begins, tourists are able to buy water, snacks, and coca leaves from local vendors. They can rest in designated areas, use hygiene services, and read about the glacier on nearby plaques — although, admittedly, the facilities are pretty run down. Just after the trail begins, dozens of guides and horses await visitors who find the hike or altitude too strenuous. Beyond the horses’ capabilities further up the path, tourists can pay strong, able-bodied men to ride on their backs to the vista point. All of these comforts are recent developments, intended to cater to a wildly different type of tourist than the athletes decades earlier.

With the sagging economic revenue of diminished tourism, maintenance of the site is challenging. Some safety railings have collapsed, maps have been half-torn off of wooden signposts, and the safety of dirt roads is questionable. Fixing these problems may heighten the Ruta experience for complaining tourists and out of touch ex-pats, but economic insecurity is also a major part of climate change. Perhaps that’s not the climate change reality some visitors want to see. It’s certainly not advertised to them. Tourists agencies across Peru instead promise participants a rare eco-tourism marvel: an endangered icy giant, estimated to have just a decade of vitality left. “See it while you can!” signs encourage. But when people actually arrive, what does near extinction actually look like? A now unremarkable small piece of ice above a high lake?

The Ruta de Cambio Climatico project succeeded in re-imagining the Pastoruri glacier as a spectacle in the context of time. The value of its experience derives precisely from its temporal state: in between former grandeur, but not yet disappeared. This particular market niche is different from the climate change objects, like bottled luxury Norwegian iceberg water, and instead, sells participants a meaningful adventure. The very fact that this market will burst and collapse with the disappearance of the glacier is in part what gives it meaning.

One thought on “The Path of Climate Change”