In my last post I argued that rather than choosing between overly narrow (“closed”) or overly broad (“open”) definitions of ethnographic film, it would be better to follow Uberto Eco’s model of listing a “family of resemblances.” This would consist of a list of features that make a film “ethnographic” but without any two ethnographic films necessarily sharing the exact same list of features. When I wrote that I had a draft list of about sixteen features I had been working on. I had planned to prune it down a bit and sharing it with you today; however, upon further reflection it occurred to me that the longer list could be grouped into four broad categories, or “dimensions,” as follows:

If I were to graph films using this approach it would look like what is known as a “spider (or radar) chart” with films rated along multiple axes, each representing a different dimension. Like this graph comparing monster trucks and drag racers along five axes: 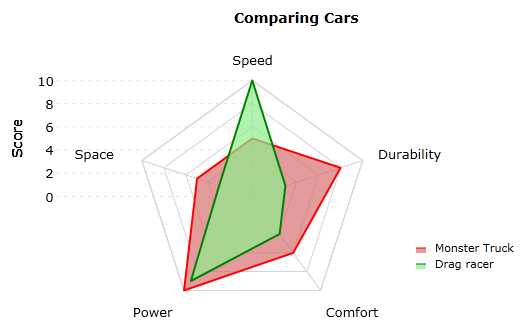 Rather than sharing the full list of sub-features today, I’ll save that for my next post. Instead, I’d like to use these four dimensions to explicate how such an approach to defining ethnographic films might work in practice. Doing so will help avoid confusion over how the full list is meant to be used, and will also serve to highlight the strength and limitations of this approach.

Let’s start by comparing the films The Gods Must be Crazy and Atanarjuat: The Fast Runner. Both are fiction films by non-anthropologists and so would be excluded from traditional definitions of “ethnographic film.” Would they both be accepted under this new definition, since they both deal with indigenous peoples that have been much studied by anthropologists? Not necessarily. If that was all it took this approach to defining ethnographic film wouldn’t be of much use. For one thing, it doesn’t really conform to our own practices as anthropologists: Atanarjuat has been shown at ethnographic film festivals, but (to my knowledge) The Gods Must be Crazy has not. And secondly, if we left it at that, nearly every film ever made could be included as “ethnographic.”

It is also worth mentioning that the way we evaluate each of these dimensions is constantly evolving. The discipline, along with its norms, subjects, and styles are very different today from the sixties. For this reason even though Dead Birds is one of the most celebrated ethnographic films of all time, a new film made in the same way today would probably be rejected by many festivals. (See discussed by Jay Ruby’s article on Robert Gardner if you’d like to get a sense of why that would be.) Similarly, contemporary ethnographic film festivals are more likely to include “sensory ethnographies” or films about the “the Anthropocene” than festivals organized by the same people just a few years ago.

Before wrapping up I’d like to point out one limitation of thinking of these four dimensions in terms of a spider graph (like that pictured above). Namely, we tend to rank these dimensions hierarchically, but this hierarchy isn’t well represented by the graph. To compensate for this oversight we could weight each of the dimensions differently. But this still isn’t good enough, because a weighting used to evaluate one movie might not be appropriate for another. For instance, I might not weight stylistic features as strongly for film by an academic as I would in considering a film by an artist. And I might not hold a journalist to the same exacting disciplinary norms as I would for an anthropologist. But what we want to avoid is making any single dimension definitive, for doing so would saddle us the kind of “closed” definition we’ve been trying to avoid. While it may not be ideal, the idea of adding weights to each of the dimensions on a case-by-case basis seems to be the best way to capture how anthropologists actually go about evaluating the suitability of any particular film for an ethnographic film festival.

In my next post I will elaborate in depth on each of these dimensions — breaking them down into their constituent features, but I hope that I have managed to make the case for the utility of this approach to defining ethnographic film and given readers a sense of how it would work in practice.