Pokemon GO, one of the big waves in summer 2016 media-mix pop culture, was released July 20, 2016 in Japan, immediately triggering warnings about personal safety and public manners. I downloaded it and embarked on participant observation ethnography for the next three weeks in Tokyo, and have played it in various parts of Kyushu since then. From the start, news from various countries of the changes wrought by Pokemon GO framed it as both a new source of social mayhem and conversely, a boon to the sedentary, depressed gamer. Yet here in its birthplace, Pokemon GO is just one of the summer events centered around this franchise. In the late 1990s Pokemon had entertained my kids while we were living in Sendai during my dissertation fieldwork. Back then the original media consisted of the card-based game, Game Boy games, and the summer’s movie, all based on the anime. I was downtown teaching English conversation when that notorious episode triggered epilepsy in some viewers; fortunately my kids were safe at the neighbor’s. From then on, all anime contain warnings at the start of each show to viewers to maintain distance from the screen and watch with lights on. While Pokemon has been misinterpreted as the devil’s temptation by some in the USA, it seems to me that in its home country Pokemon has continued to inspire personal safety instructions, and public manners training as well.

These messages are inherent to the JR Pokemon stamp rally, a promotion luring children and their parents yearly since 1997 out into the heat during summer holiday to get the pamphlet, buy a day pass and ride the trains collecting character stamps at stations in greater Tokyo (and other JR regions). The rally combines various threads of Japanese cultural practice beyond the pursuit of Pikachu. “The urge to collect fantastic specimens and their stories has deep roots (Foster 2009) in Japanese culture, dating back to the Tokugawa period when people would collect folklore on yokai goblins.” The collecting of stamps – which one can do with or without rallies in various public venues — derives from shrine pilgrimages and also appears in bureaucratic paper trails. As for manners, the JR Pokemon stamp rally supports the concept of ‘friendly authoritarianism’ coined by Sugimoto (2014). This socialization technique in Japanese civil society includes the use of positive encouragements to conform, portrayal of the powerful as benevolent, promulgation of an egalitarian ideology, and the strategic use of fun to painlessly pervade authority. As any Tokyo train rider knows, stations and trains are full of manners posters (see Miller 2011), often depicting amusing caricatures of misbehavior while appealing to one’s needs for personal safety and desires not to cause problems for others. The Pokemon stamp rally provides multiple exposures to these posters as well as more directive aural messages (e.g., stand behind the yellow line), not to mention familiarity with JR staff and stations, over the course of play. Anyone who has ever seen a child in Tokyo calmly commuting to school alone could consider them as possibly having been trained with Pokemon’s help. 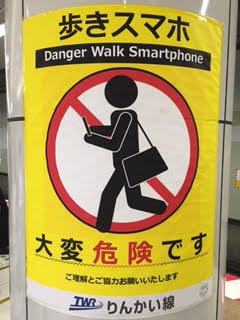 Since 2004 I’ve collected the brochures to use as examples of friendly authoritarianism while teaching with Sugimoto’s text in a summer course. The number of train stations involved in the Tokyo rally varied between 91 and 100, with prizes for successful collectors, up to 2011. In 2011 and 2012, following the national edict to save electricity in the wake of the Tohoku earthquake and nuclear disaster, the number of stations/stamps decreased to 12 divided into two sets of six stations along the Yamanote circle line, and a song was added. Since then, however, the number has gradually increased to 38 in 2015, though this year a riddle was included dividing the JR rally into two phases of seven stations each. Meanwhile, a Kamen Rider (masked rider) stamp rally was undertaken by the Tokyo Metro subway, on a much larger scale. When I praised a boy in the subway for his nearly complete collection, his father showed me the detailed schedule he concocted to maximize their efforts on a day pass. 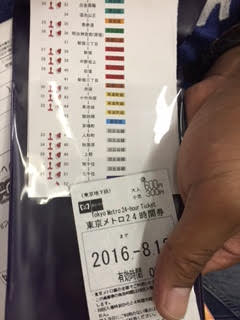 During the summer I was traversing the central areas of Nagatacho and Yotsuya daily on foot, and in playing Pokemon GO learned about the area’s historical monuments, since they were Pokestops dispensing free Pokeballs and other game goods. A stroll to nearby Akasaka reminded me of its history as a postwar playground, since Pokestops there are associated with restaurants rather than relics. In Shibuya, I caught a human Pikachu named Kohachu, who strolled around dressed in a full body suit with a yellow randoseru knapsack.

Over the three-week span since the release of Pokemon GO a substantial increase in manners warnings and posters emerged. Some of these were multilingual, reflecting the recent increase in foreign tourism. Most were general warnings about the entrenched practice of sumaho aruki ‘smartphoning while walking’, which refers specifically to reading and writing rather than speaking on the phone. Pokemon GO play, in my experience, makes fewer attentional demands than interacting with text while walking; perhaps this is why the manners messages took the general behavior to task. Still, Yotsuya station gave specific recorded warnings reminding smartphone game players to avoid causing nuisance to commuters through inattention or by blocking passageways.

Another Pokemon event in Tokyo’s Kanto region this summer was the third Pikachu parade held in Yokohama’s Minato Mirai area, near the mall where a large Pokemon goods shop is located. Exiting the station along with the crowds, I came to face a worker in the adjacent building who held a sign reminding Pokemon GO players that their phone will buzz when a Pokemon is near, so they may continue to play without constantly looking at their screen, and that before doing so, players should check for safety. The sign also said that there were no special tie-in events with the Pikachu parade program, and ended with the phrase manaa o mamotte tanoshiku pokemon ‘minding your manners, enjoy Pokemon’. 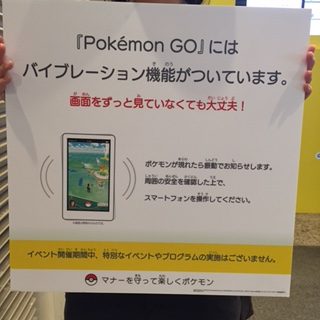 It may seem I am building up an argument for the oft-said notion that “the Japanese are so polite”; yet if that were the case, would the posters and warnings be necessary? Recent news emerged that a Japanese man in Shikoku hit two women (killing one and heavily injuring the other) by playing Pokemon GO while driving. Ongoing efforts at politeness training suggest a gap between actual behavior and Japanese expectations for social behavior. These efforts may use language that is direct ‘don’t litter’ or indirect ‘is your river crying’, or images of what one should or more likely, shouldn’t do. Like the zoomorphic creatures Miller found in the manners posters she studied, Pokemon are recruited in these efforts to promote civil society. Recent Facebook posts include various manners posters aimed at players, telling visitors to temples that the Pokemon are there to worship and shouldn’t be caught, or are gifts from the Buddha, and that visitors should pay respects to the deities while there. 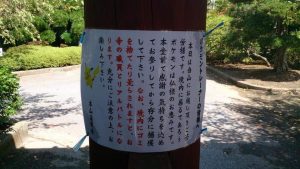 Potential players in a hospital were told the Pokemon there are sick and should be left in peace to recuperate. Rather than brusquely saying ‘don’t play your game in here’ players’ fandom may be encouraged to include empathy for the Pokemon they may seek to catch in inappropriate locales. Inquiring at two local shrines which had Pokestops and gyms on their premises, I got conflicting responses about their tolerance of visitor behavior. A worker I spoke with at one shrine in a busy tourist spot has witnessed players who approach the shrine gates/Pokestops smoking cigarettes, or sit down within the shrine to play where there are no facilities to sit. They already have an instructional sign at their font showing how to cleanse one’s hands and mouth before entering the shrine to worship, and they eventually posted a warning sign and barrier blocking night access to the shrine area a few weeks after this. (Nelson 1996 observed day vs. night uses of shrine grounds). However, at another seaside shrine in a less popular location a worker reported Pokemon go players among recent visitors but no such problems, and even mentioned that surfers who may use their parking lot and stroll through the shrine to the beach are tolerated. It is an ongoing challenge to the managers of such spaces to regulate the multiple layers of use for any landscape, whether real or virtual, and there seems to be no universal solution. 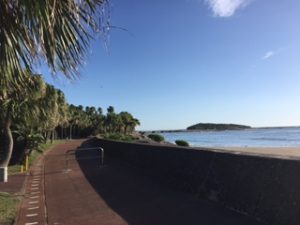 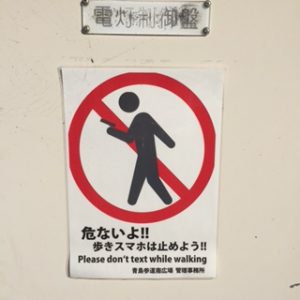 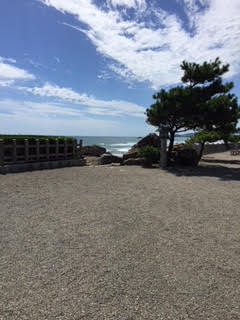 Pokemon GO brought to Japan a different set of requirements for safe and mannerly play during passage over the landscape than those of the JR Pokemon rally that teaches kids train manners. Even though Japan already has AR-related games including girlfriend SIMS and contents tourism promotions, Pokemon GO seems to have caused the greatest sense of danger and moral panic so far. It appears that, like the now-obligatory warnings that emerged after the epilepsy-triggering anime episode, Pokemon once again provides the ruse for another crackdown on media related behavior, this time about the already common use of smartphones in Japanese public space.

Miller, Laura. 2011. Behavior that Offends: Comics and Other Images of Incivility, pp. 219-250 in Manners & Mischief: Gender, Power, and Etiquette in Japan, edited by Jan Bardsley and Laura Miller. Berkeley: University of California Press.

Nelson, John K. 1996. A Year in the Life of a Shinto Shrine. Seattle & London: University of Washington Press.