The early months of 2013 saw one of the largest congregations of mankind in the 21st century transpiring at the confluence of the rivers Ganga and Yamuna in the north Indian town of Allahabad. Maha Kumbh Mela, which happens once every 12 years, is one of the most significant Hindu religious gatherings. Millions of devotees assemble to take a sacred bath at a consecrated spot where the two rivers come together. An estimated 120 million people visited Kumbh over a two-month period including over 30 million on a single day, on 10 February 2013.

I, with a motley group of friends and collaborators, spent more than a month in Kumbh, shooting a feature length film called: “The Churning of Kalki” [Kalkimanthankatha] – in which, following on the footsteps of Samuel Beckett’s “Waiting for Godot”, two actors from Calcutta go in search for Kalki, the tenth and the final avatar of Lord Vishnu. Kalki is the most enigmatic of Vishnu’s Avatars, the one who has already been on earth but has never been found. However, there is an outbreak of a monumental war during their quest. The two actors prepare themselves for this war by reading Chairman Mao-se-Tung’s “Little Red Book”.

These are selected ethnographic journal entries together with photographs taken by my collaborators.

Saturday, Jan 19, 2013
Reached Kumbh Mela yesterday afternoon. It is a monumental temporary cityscape made up of tents adjacent to the Ganga. We walked around for some ten kms, and by the time we returned to our camp, which is at the edge of the temporary city, I collapsed. I have not walked for such a distance in many years. We have been given a large tent that has 8 iron cots with blankets. It is cold at night with the temperature falling to below freezing. The temporary city is erected on the dry riverbed of Ganga and during the monsoons the camp area is nearly ten to twenty meters underwater. So there is a lot of sand and dust around. 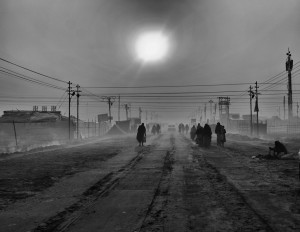 Monday, Jan 21, 2013
It is past midnight. A deep fog has embraced the riverbed we occupy – a very, very deep, unforgiving and mysterious fog encompasses our fragile beings. We had to drive through this fog to come back to the camp on the riverbed from Allahabad. We were not lost but wedged in the fog. The newly unfamiliar landscape seemed enigmatic beyond my imagination. I was not frightened, but I was anxious. I asked the driver to drive slowly. In the opaque fog we crossed one of the many tenuous pontoon bridge made of wooden planks and iron plates that gingerly intersected the Ganga. On one side was the river stealthily buried under the fog and on the other, the bridge over the river, pierced fog. The visibility level was really low; we could barely see a couple of meters ahead of us. There were bright lights that seemed to infiltrate our beings. It was very cold. I often use the word encompassed in my vocabulary, today I really felt encompassed by the world that I live in a profoundly visceral way. 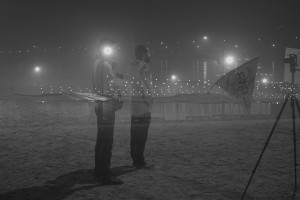 Saturday, Jan 26, 2013
I am making a film that deals with an internal struggle as reflected in this massive gathering. Kumbh is a religious gathering but it seems more like a war zone – a bombed-out post-war refugee camp. It’s a surreal landscape that seems hyper-modern with its wide empty iron roads, streaks and streaks of saffron sodium vapor streetlights. As usual, my own inner world seems to be crumbling, in a perpetual state of decomposing. I wish I could stop this disintegrating. I am feeling extraordinarily tired, physically exhausted. The chilling weather is now taking a heavy toll on me. I have caught a cold and my chest is heavy with congestion – full of mucus that refuses to come out. I am not sure if I am happy making this film, or if it is going to make me sad.

Tuesday, Jan 29, 2013
I uneasily sleep on my rickety iron cot in the tent, in the center of my crew and collaborators, amidst a perpetual festive resonance, comforted by the pale, placid but loud snoring of my cinematographer and the gentle but perpetual coughing of my sound recordist. Echoes, reverberation, smells, images, things, mud, dust, sand, people – everyone and everything is intermixed and intermingled here. There is no silence here in the dead of the night. There is an old, elderly man who sits shrouded in his heavy woolen shawl fumblingly reciting the Tuslidas’s Ramcharitarmanas throughout the night in a tattered tent close to our camp. His weary, tired, and reverberating voice, emanating from a crackling aluminum loudspeaker, seems like a sad lullaby that puts us all to sleep every night. His voice pierces through the non-silent cacophony that descends on the chilly winter night of Kumbh like a deathly fog through which one cannot hear even one’s own voice. Occasionally, his monotonous recitation is punctuated with a burst of unusual energy and he raucously bellows: “Jo Bole, so Nirbhay!” [One who speaks, he is the one who is fearless]. The timbre of his voice is defiantly somber – insolent of the weather, the cold, the night, the emptiness. I sleep, crouched under two heavy woolen blankets, still smelling of naphthalene balls. My head is covered with a thick knitted monkey cap, and my feet with rough khadi socks – but still I am unable to protect my body from the bone-chilling cold. A cold that seems to have made a home in my asthmatic chest, making me cough like a man on his deathbed.

Friday, Feb 1, 2013
I am shooting the film on a Super 16mm Arriflex SR camera and a Digital Canon 5D. A couple of years ago, I had bought the 16mm camera from the venerable proprietor of Lee Utterbach Cameras – one of the most respected camera rental houses in San François Bay area. I had got the camera for a good deal as he was retiring and closing his rental business. Along with the camera he gave my a lot of unused accessories and he had mentioned as an aside that Gus Van Sant once used this camera. Nearly a decade ago, I had shot my feature film on the same 35mm Arriflex II C camera that was often used by Satyajit Ray. The solace I had was that, even though my films would not be as influential as these filmmakers, at least I had the opportunity to employ the very same technological materiality to make my cinema.

I can review the digital footage everyday and it looks curious – desolate, empty spaces where the two characters are placed. The film organically seems to be producing an anti-Kumbh aesthetics. The Maha Kumbh of Allahabad is one of the most highly photographed events of Hindu religiosity. It has been photographically and cinematically captured since the birth of these technologies in the process producing images that have become quintessential representation of Hinduism in modern times – naked Naga Sadhus with their matted hair and boisterous guises, masses of people in fervent devotion taking dip in the waters of the Holy river and so on. But in this film an anti-Kumbh is evolving as I am experiencing  – vacant desolate spaces, a post-war refugee-camp tattered tent city, a forsaken river that spreads like a vast grey sheet, over which man-made pontoon bridges span like detained centipedes, static and unable to move.  The energy of this space has dictated the making of the film. The spatial energy is truncating time in the film. I am satisfied with the ten-day continuous shoot that we have done.