[Savage Minds is pleased to publish this essay by guest author Heather Hindman. Heather is Associate Professor of Asian Studies and Anthropology at the University of Texas at Austin. Her book Mediating the Global: Expatria’s Forms and Consequences in Kathmandu (Stanford University Press, 2013) explores the employment practices and daily lives of elite aid workers and diplomats over the last several decades of changes in the development industry, with a critical analysis of human resources management and cross-cultural communication. She is also co-editor of Inside the Everyday Lives of Development Workers (Kumarian Press, 2011). Her recent publications explore Nepal’s elite migration practices, the rise of voluntourism and the shifting interests of aid donors in Nepal. Currently, she is researching youth activism and labor, particularly among elites with overseas experience.]

How do scholars balance the need to write quickly and the need to write well? Pressures to “publish or perish” and the rise of “visibility indices” have led many of us to write in ways that will be recognized by our institutions, rather than in the other ways we also think and reflect. Some academics now are calling for a turn to slow scholarship, but this may be a luxury only the elite can afford. In a time of crisis, writing slowly does not work; instead, we need to write swiftly. Recently, I and many people who have conducted research in Nepal found ourselves under pressure to write quickly while still maintaining our academic integrity.

The April 25th earthquake in Nepal proved devastating for the country and spurred many in the anthropological world to action and comment. In the days after the quake, and propelled forward by the major May 12th aftershock, academics in the US, Europe and Asia found themselves overwhelmed by requests for interviews and op-eds, and many of us were eager to do something. I felt paralyzed and incompetent, sitting in Austin, Texas, trying to finish the semester, working closely with local student groups and NRN (Non-Resident Nepali) organizations and operating at a high level of distraction. Social media was afire with check-ins of who had survived, where the greatest damage had occurred and what resources were needed to keep people alive on a day-to-day basis. I found myself pulled into the social media world and addicted to email and messaging as I had never been before. Many of us sought to raise funds and awareness in our own communities, to establish contact with those we care about in Nepal, and to write brief articles as we felt able for media venues. After the initial flurry of media contacts, several of those who had written about the disaster were contacted by Anthropology News to write an article for their online forum. We hoped to get someone familiar with facts on the ground, yet many anthropologists who were in Nepal were dealing with everyday needs of seeking shelter, looking out for loved ones and trying to provide basic relief as they were able. AN Managing Editor Amy Goldenberg posted a brief piece that collected links to essays written by North American-based anthropologists for other venues, and there were promises from others to write more substantive articles when more research and reflection was possible. Then, Anthropology News—an official publication of the American Anthropological Association—found a respondent in anthropologist David Beine, Professor of World Missions and Evangelism at Moody Bible Institute. 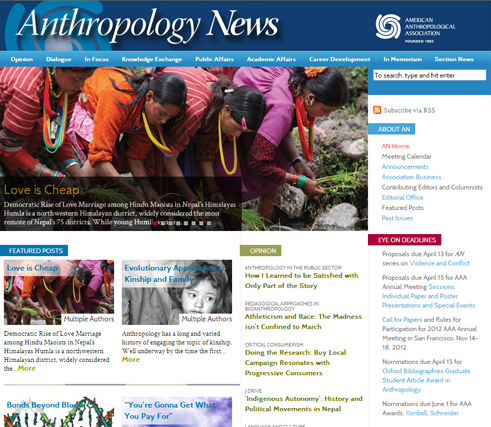 Beine’s piece “Earthquakes and Culture” appeared on the AN website less than two weeks after the disaster. Beine discussed how certain cultural memes had, if not caused the earthquake, exacerbated the disaster and hampered response efforts. The cultural touchstones Beine pointed to are familiar to those who have visited Nepal – clichés about responses to inaction (ke garne) or claims to community insularity that are part of the oft-touted tropes of Nepal. After the Tohoku triple crisis in Japan, “collectivist culture” was often mentioned as a reason for the vigorous post-disaster mobilization, and a reason to celebrate the Japanese community spirit, but new stereotypes and politics also emerged as the crisis lingered on. In post-quake Haiti, stereotyped “culture of poverty” arguments also circulated. Many of Beine’s stereotypes of Nepal are deployed in negative ways, e.g. pointing to aphno manche (“own people”) as an idea of why aid might be unevenly distributed, rather than as a potentially effective form of networking and community support. He cited important historical phenomena that might complicate rebuilding and resilience after the quake, including Kathmandu’s expanding urban population and the oversized role that international aid has played in the last half century of Nepal’s history. But much was missing: the intricacies of bureaucracy in Nepal, local and national level political turmoil, social and economic inequalities, Nepal’s devastating civil war, issues of privilege and politics in international development, the great diversity of the country and any sense of actual, on-the-ground Nepali efforts in the post-quake period. As a result, his article fell far short of the standards expected of contemporary cultural anthropology, relying more on outdated themes one might find in Kiss, Bow, Shake Hands than in an official AAA publication. The article seemed to blame the victim, noting that the earthquake was exacerbated by “cultural features that have led to unpreparedness.”

In light of the earthquake, I too felt compelled to write quickly but (I hope) with reflection and in areas about which I have research experience to bring attention and knowledge to the global agenda of earthquake relief. When Dr. Beine’s article was shared with me by a graduate student who was aghast at his culturism and objectification, I had hoped that it would be buried online, or overwhelmed by other articles with a more sophisticated view of Nepal, articles that highlighted the diversity of the country and the complexity of response to a disaster of this scale. And for a time it was, but I was naive. Two Nepali anthropologists found the piece and wrote their own response questioning the role of anthropologists in speaking to the field in times of crisis. Gaurab KC and Mallika Shakya, respected scholars and researchers in Nepal, found much to criticize—appropriately so—in Beine’s article. While the authors note that Beine’s article was likely written in haste and that it was intended for a mainly non-Nepali audience, they nonetheless take it as representative of American anthropology. And why not given that it was published by the American Anthropological Association’s official newsletter? We are living in a connected world, one in which scholars from all over the globe can access information and contribute to the scholarly conversation, although not in Anthropology News, as one must be a member of the AAA to post comment on their website.

KC and Shakya’s article concludes with several provocative questions, including asking if “the anthropology on Nepal has kept pace with emerging anthropological movements elsewhere, especially within South Asia and the Global South?” I have long been proud to work in Nepal, and found the anthropological discourse on the Himalayas to be one that seeks to go beyond fetishism, Orientalism, and objectification in asking questions about “virtual Sherpas,” Prisoners of Shangri-la, and “Little America in Kathmandu,” and in thinking reflectively and reflexively about the role of anthropology in Nepal, especially in relation to aid work and cultural exoticization. Yet, as it now stands, the voice of the American Anthropological Association on the earthquake in Nepal suggests that if Nepalis had only been in well-constructed Christian churches, rather than decrepit Hindu temples, maybe fewer would have died on April 25.

All this prompts me to ask a question about editing decisions and peer review in Anthropology News. I write in Savage Minds, not because it is “peer reviewed,” but because I read the work of my peers there. Each year, I send hundreds of dollars to AAA, and yet I learn little of what goes into vetting the articles that are put up in “my name” and which are read by scholars around the world. I fully understand the offense taken by KC and Shakya regarding this article that purports to explain the “culture of Nepal.” There is far more at stake than “good methods and data” in vetting an academic article, but I wonder what editorial vetting was done of “Earthquakes and Culture.” As relief and recovery continue, aid organizations and journalists will still be clamoring for sound bites and quickly digestible “truisms” about Nepal’s culture. The discipline has been through this before, evidenced by guilt/shame culture from Benedict’s remote scholarship for Chrysanthemum and the Sword on to more recent adventures with the U.S. Army’s Human Terrain System. Shakya and KC present anthropologists with an important admonition, to think before we write, to be aware of our limitations, and to avoid playing to the stereotyped paradigms in which media and development agencies wish to slot our knowledge. But I hope that they and others will understand that Dr. David Beine does not speak for me, and certainly does not speak for all anthropologists concerned for Nepal.

4 thoughts on “Writing Good Anthropology in a Time of Crisis: Lessons from the Nepal Earthquake”