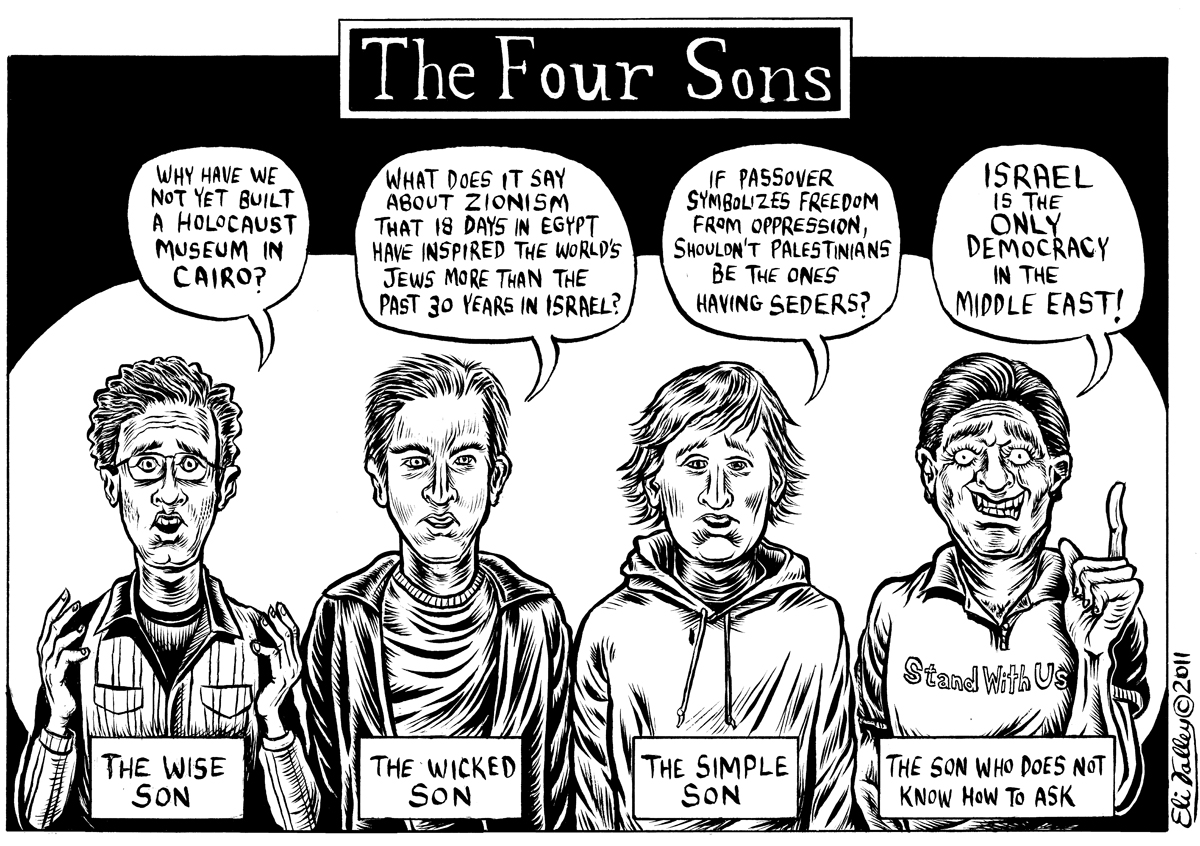 Passover is still a few months off, but I wanted to share a bit of wisdom from the Passover Haggadah because it has helped guide me through many an online debate. There is a section which tells the story of the four sons (we always read it as “sons and daughters” at my house): “one who is wise, one who is wicked, one who is simple, and one who does not know to ask” and “recommends answering each son according to his question.” Wikipedia can fill you in on the rest of the story and the traditional responses if you need help understanding the irony of the cartoon at the top of this post, but for my purposes I just want to focus on the central pedagogical insight: that different questions and questioners require different responses. That different questions call for different responses may not seem to be a particularly useful insight, but I think a lot of the pain involved in internet discussions can be avoided if one thinks clearly about this and learns to act accordingly.

For me, engaging in online debate means trying to think seriously about a comment1 and what work it is doing before I choose how to respond. This avoids the problem suggested by the joke of the cartoon: that one’s ideological stance will shape how one interprets the comment. I’m not saying that one can respond to comments in a way that is completely free of ideology, just that focusing on the comment text itself rather than your assumptions about the person leaving the comment can help a lot. Yes, interpretation of the motivation and character of the commenter is important, but in this approach it only enters into the equation after you have determined what type of comment you are dealing with. What follows then is my adapted typology of the four types of comments one finds on the internet, and how best to respond to each one.

The wise comment is one that shares knowledge. In this case the motivation of the commenter is rather unimportant. Sure, they might be showing off, but they also might just be trying to be genuinely helpful. Or perhaps they just want to return the gift of your post with the gift of some random bit of knowledge they possess? Who knows. This knowledge sharing can be relevant or irrelevant, but in either case it is fundamentally in the spirit of the internet.

The key thing about responding to such comments is to avoid being threatened by them. There is no need to be competitive by trying to prove that you know everything said in the comment and more. You might feel compelled to explain that you are already familiar with the various sources mentioned in some comment, but chose not to include them for various complex reasons. Sure, if the reasons for ignoring certain sources or facts help illuminate your discussion, do go ahead and share your thought process, but if you just don’t like the idea that anyone would think that you hadn’t read those sources, or you think the person is an idiot for mentioning certain sources in the first place, it is best to keep silent. A simple thank you will suffice. Otherwise you will do little more than belittle the kind gesture of the commenter who wanted to share some of their knowledge with you.

There is a lot of debate on the internet about how to respond to trolls. Comments which are trollish are those which are deliberately designed to provoke in order to sidetrack the discussion or provoke an angry reaction.

Trolling is a competitive sport, and many of us can often give as well as we can take, but just because you have a really good come-back doesn’t mean you have to use it. (Well, maybe sometimes.) These comments are almost always best simply ignored. Or even deleted, blocked, and/or reported – depending on the platform.

I debated about giving “comments which are basically blog posts” a separate section, but ultimately decided to put it here as well. Although not meant maliciously, these comments often have only tangential relationship to the topic at hand and try to hijack the discussion in much the same way that the troll’s does. The intention may be different, but the effect is often the same. The author mistakenly believes that they will get more readers by posting their writing in the comments sections of other blogs or Facebook posts rather than starting a blog of their own. I say mistakenly, because the tangential and long-winded nature of their posts tends to put most readers off, much like SPAM or pop-up ads which people ignore because of their irrelevance.

On Savage Minds we consider such posts a violation of our comments policy (as are many other unacceptable forms of behavior not mentioned here) and we delete them.

What looks like ignorance might, in fact, be trolling. But I think it is best to be safe and assume that people genuinely don’t know something and to proceed from there. There are, however, three very different kinds of ignorance that need to be distinguished: The first is “self-aware ignorance” – someone who knows that they don’t know something and genuinely wants help. The second is “ignorant ignorance” where someone is unaware of their own ignorance. And the third is “willful ignorance” where someone has a genuine desire to avoid learning. Each of these needs to be handled differently.

Dealing with self-aware ignorance is the easiest. Simply switch into “teacher mode” and try to be as helpful as you can be. With ignorant ignorance, however, one has to tread carefully, lest you stomp on someone’s ego. In these situations I generally point to some resource with the comment that it has personally been useful for my own understanding of the issue. Another approach comes from the classroom, where I try not to directly contradict students if I can avoid it, waiting instead till there is another opportunity to address the problem in such a way that it does not come across as a direct criticism of an individual. Sure, not everyone will follow you closely enough to get the hint, but it is there for them if they do. The willfully ignorant, unfortunately, poses a more intractable problem. I generally start off assuming that they genuinely want to learn, but then simply drop out of the discussion if that assumption proves mistaken. You are never going to persuade someone who isn’t open to persuasion, and the quality of the discussion usually deteriorates pretty rapidly if you try. As the saying goes: “You can lead a horse to water, but you can’t make it drink.” This sounds obvious, but you’d be surprised how hard it can be for some people to simply let go of a conversation, even when they know it is futile to continue.

The One Who Didn’t Read

People love to join in conversations without having clicked on the link or having read nothing more than the title of a post. Sometimes they just respond directly to the previous comment, ignoring the original post as well as previous discussions. Again, I don’t think this is necessarily a bad thing. Like sharing irrelevant knowledge (itself a common symptom of this type of behavior), commenting without having read the post is often just a form of sociality – a desire to be part of the conversation. On Facebook I get a lot of “likes” from people whom I’m pretty sure don’t even read the posts before liking them.

But understanding the motivation doesn’t mean you have to reply. If it is someone I know I might say “Don’t pay any attention to the awful headline, you really should read the article.” But if it is a stranger, I will just ignore them all together.

I’ve written these thoughts from the point of view of a blogger, or someone who has shared a link on social media (I know some readers balk at the pretentiousness of the word “curator,” but it is actually useful here), but they also pertain to other commenters. One reason for writing this post is to try to cultivate a shared set of norms which I think would make the internet a better place to live. This is not a call for “civility” in the sense of silencing strong opinions, but simply a call for relevancy along with some tips for how to get your ideas across without grief.

3 thoughts on “The Four Types of Comments”