[Savage Minds is honored to publish this essay by Ruth Behar. Ruth is the Victor Haim Perera Collegiate Professor of Anthropology at the University of Michigan. She is the author of numerous articles and books including The Vulnerable Observer: Anthropology That Breaks Your Heart (Beacon Press, 1996), An Island Called Home: Returning to Jewish Cuba (Rutgers University Press, 2007), Traveling Heavy: A Memoir In Between Journeys (Duke University Press, 2013), and is co-editor with Deborah Gordon of Women Writing Culture (University of California Press, 1995). Of all her writings, the best known is Translated Woman: Crossing the Border With Esperanza’s Story (Beacon Press, 1993). It is to this book–and to Esperanza–that Ruth returns in the essay below.]

The old year ended and I hadn’t yet said goodbye to Esperanza, my comadre. I just couldn’t believe she was gone.

I knew that the first important thing I needed to do in the new year was to write a farewell letter to her. Now it is Three Kings Day, an appropriate moment to thank her for all the gifts she gave me.

Esperanza and I met on the Day of the Dead in 1983. I was about to turn twenty-seven and all I had to my name was a recent Ph.D. in anthropology. I was living in the town of Mexquitic, in Mexico, fifteen hours from the Laredo border, and trying to decide what to do with my life after a disastrous, humiliating academic job interview. She was fifty-three-years-old, a farmer and street peddler, barely literate. Other women told me to avoid her. She was known to be fiery, rude, and a witch.

She looked beautiful carrying a bouquet of calla lilies to place on the grave of an ancestor. I reached out timidly, uncertainly, asking whether I could photograph her. She looked back harshly, but still let me take the picture, and then she turned away. I thought I wouldn’t have any other encounters with her, but afterwards she came asking me to be her comadre. She had expected me to act like an arrogant gringa. My shyness, and Cuban accent, made a positive impression on her.

An unusual friendship was born and over time we became “co-mothers” of a book, Translated Woman: Crossing the Border with Esperanza’s Story (in Spanish, Cuéntame algo aunque sea una mentira: las historias de la comadre Esperanza). It wasn’t your typical life history. The story of her life was entangled with the story of how we came to know each other and why I was the one who wrote it down. 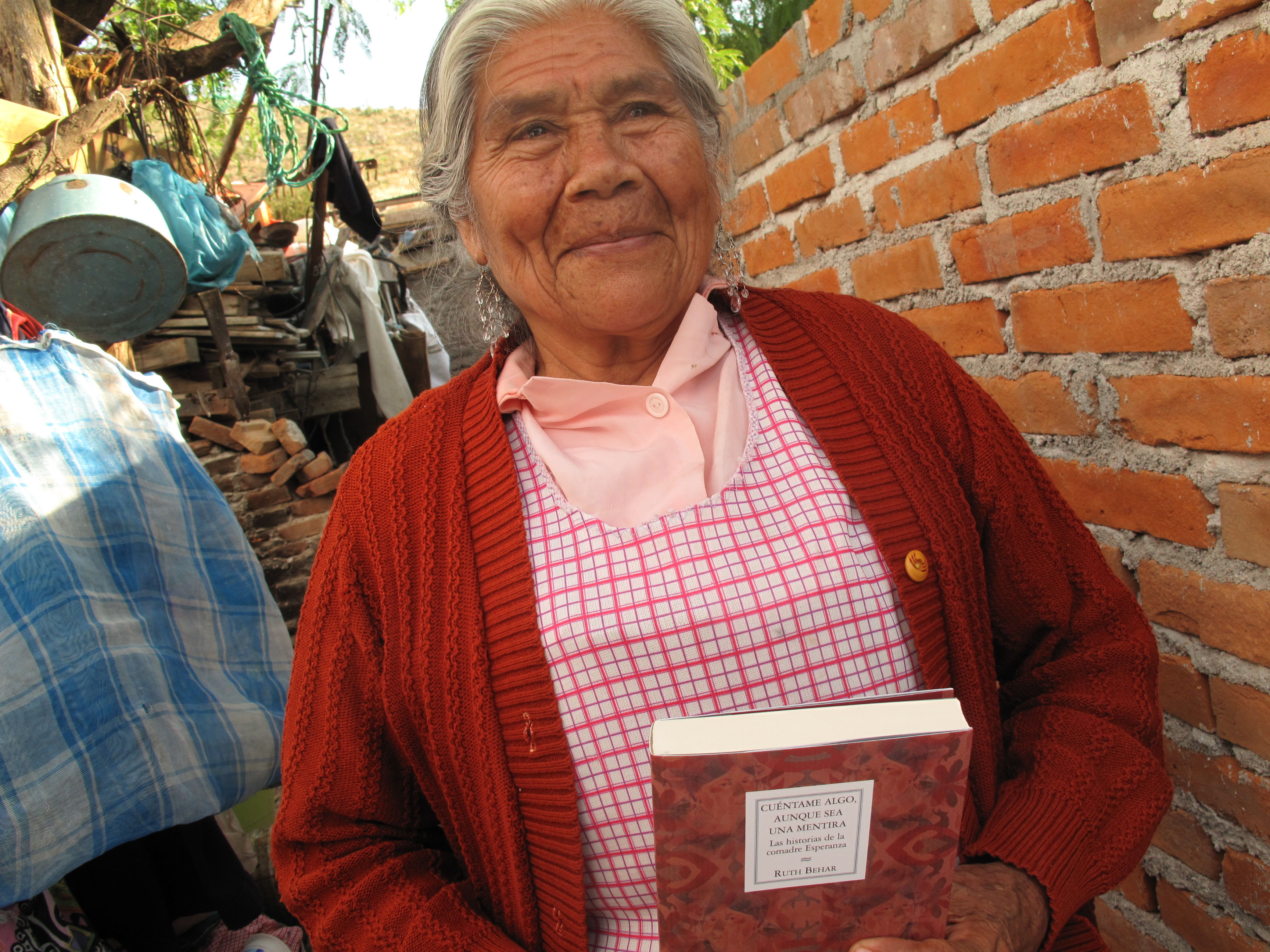 In an earlier era in anthropology, she would have been dubbed a “key informant.” But I didn’t see her that way. Esperanza became a guide in my quest to become a writer and not just an ethnographer. Her rage, her irreverence, her criticism of the society in which she lived, taught me to be a little braver, a little more fearless.

I was on a plane to London to give a lecture while she was dying in the brick-and-mortar room that her youngest son built for her after she gave him her house. “But you must promise to take care of me in my old age,” she told him. And so he did. He was the good son. He’d seen his older brothers and sisters infuriate their mother by wavering in their loyalty toward her. The youngest of the five children, he had the gentlest temperament. He had been the right choice to inherit my comadre’s house.

It made sense that I was the one traveling, literally up in the air, as she was leaving the world. In our relationship, I had always been the traveler, the person whose imagination was fed by the need to go to other places.

In contrast, she was the one who stayed put, not needing to be uprooted to spark her imagination. She could fly, and take listeners with her on the ride, simply by telling stories about her own life, embellishing them with a fairy tale sense of wonder and horror.

The news of her death reached me after I had cleared customs and was waiting to be picked up at the airport. It was October 28, only a few days before the Day of the Dead. I looked down at my phone and saw the little number light up on Facebook. Her youngest son sent a succinct message:

It read like a poem on my tiny screen. He was polite, called me “señora” and wished me a good evening, told me he was just letting me know his mother had died at three in the afternoon, and she’d be buried the next day at four in the afternoon. And then in English, he said “bye.”

Two years earlier he found me on Facebook and sent brief messages to say hello. More recently his messages were about my comadre’s deteriorating health. She was getting old, he said. I shouldn’t delay in returning.

So I went in August to see my comadre, not knowing it would be the last time.

“Comadre, comadre,” I called out to her from the front door. The dog barked loudly, but she still didn’t come. I walked up to her window, gazed through the gauzy curtain. I could see she was there, sitting on her bed. And she saw me too.

After a few moments, my comadre’s older sister appeared at the door. I followed her to my comadre’s room, and she politely slipped away, knowing I’d want to be alone with my comadre.

“Comadre, I can’t leave my room. I’m a prisoner in my room.”

I bent down to hug and kiss her. She wore a skirt and thick stockings. She was wrapped in a thick woolen shawl in the heat of summer. Her hair was nearly white, pulled back into a single long braid.

“I broke my hip and was very sick before that in the hospital. Cancer, they say. Who knows if it’s true? That’s what the doctors say. They wanted to operate on my hip, but I said no. I want to be in my casita. So here I am, comadre. Here I am.”

It was painful for her to move, but she sat up, and smiled. Soon her son arrived with his two young daughters and he brought chairs and a small table and some sodas and cookies.

“Sírvase, comadre, sírvase,” she said, waiting until I took a sip of the soda and bit into a cookie before she had anything to eat.

I saw the walker by her bedside, and on the table, a single electric burner. On the wall a large crucifix hung, with a rosary dangling from it, and off to the side was a small image of Juan Diego kneeling before the Virgin of Guadalupe.

The full altar, with the large Guadalupe and the Mano Poderosa, was in the next room. I peeked in, saw the two beds piled high with clothes and blankets. On my previous visit, my comadre’s younger daughter and epileptic grandson were living there.

“I threw her out of my house, comadre. Both her and her son. I had no choice. She has no respect for me. Or for herself.”

She’d told me before how she begged her daughter never again to see the man who fathered her child. He was older, married, a drunk, and a distant cousin. Esperanza was convinced he’d raped her daughter. She brought him to court and the man served a jail sentence. His wife died soon after he was released, and again he took up with her daughter.

“Choose any man you want. Any man but that man,” Esperanza told her.

But she wouldn’t listen.

“So she lives with the viejo now. She and the boy. He’s always hungry and comes here begging for food.”

A few days later, her daughter came to see me with her son. He had grown tall and skinny since my last visit. He was trembling and crying. His father had smacked him in the face for demanding money so he could buy a roll of bread.

“We’re getting married, a church wedding,” she told me. “He really wants to be good to me.”

I could only think of my comadre’s suffering, and since I was her godmother, I’d bought the cake for her quinceañera, I dared to scold her, “Go say you’re sorry to your mother. Try to make things up with my comadre. Try.”

“You know how difficult she is. And how unforgiving.”

It was true: my comadre was difficult and she was unforgiving. To the bitter end.

And yet I loved her and respected her and spent many years talking to her, listening to her, recording, transcribing, translating, and interpreting her stories.

In opening herself to me, she helped me to find the voice to do the writing I’d been longing to do—honest, self-questioning, poetic, political, and personal writing.

What did she get in return? Yes, some money, and some things she wanted. But most of all, her story enshrined in a book. A story translated into English for the first edition, for the gringos, only to be untranslated for the second edition, in Spanish.

She couldn’t read it. But her grandchildren will. Already one of her grandsons has read the book cover to cover and said he’s glad the story got told. A granddaughter, who is eight, says she’s waiting to grow up to be able to read it.

Her youngest son kept his promise. He cared for his mother until she was brought to rest in the earth at the age of eighty-four. And in the same way he cared for his mother, he cares for the book of his mother’s life. I can’t forget him showing me how he keeps the book wrapped in many layers of plastic to protect it from getting dusty. Then it’s tucked away on a shelf deep inside a cabinet in the room that houses my comadre’s altar, protected by the Virgin of Guadalupe’s serene gaze. 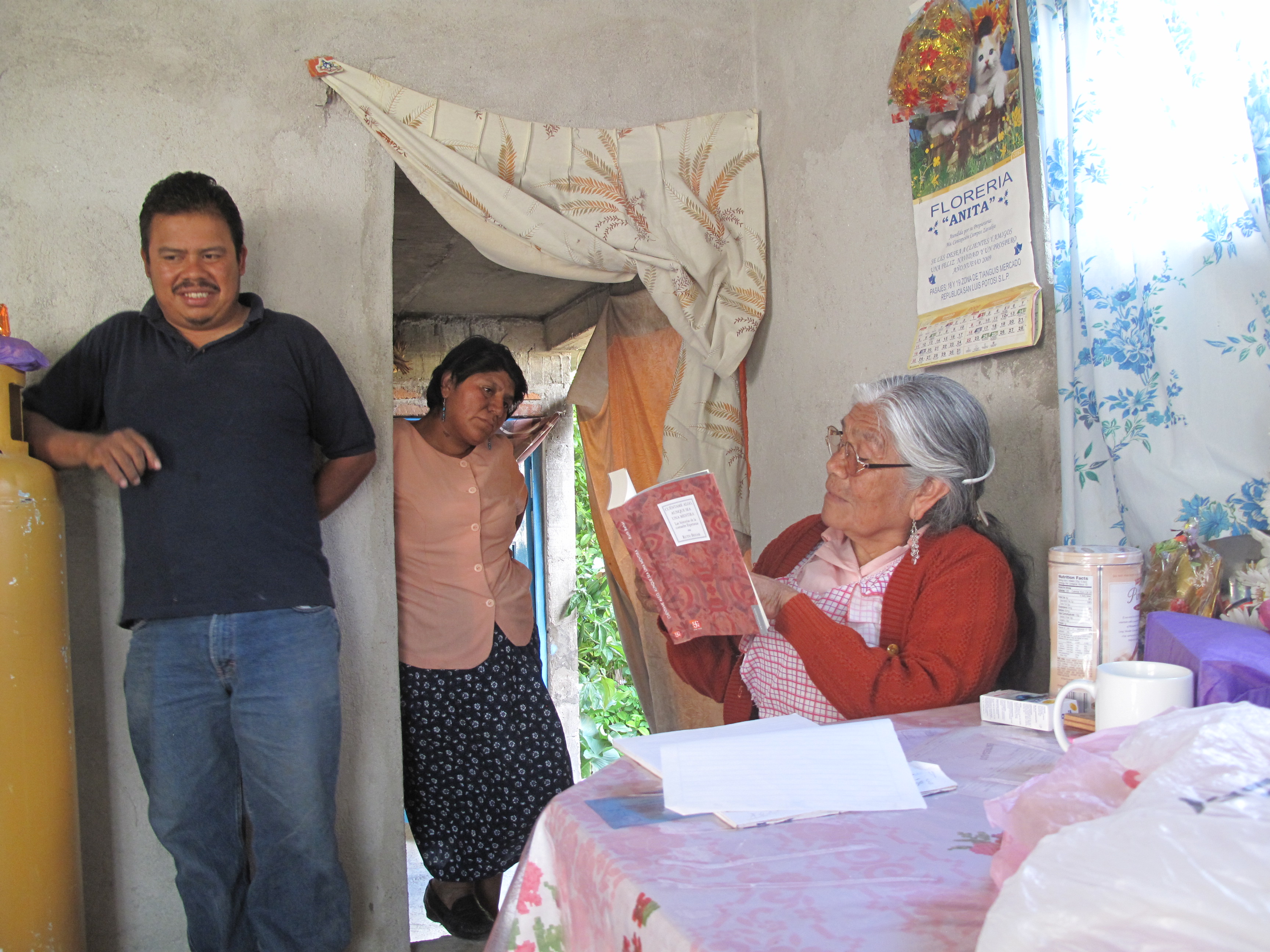 The book is no jewel—just a souvenir of a time when two women, two strangers, dared to embark upon a conversation with each other. One was an anthropologist with a degree and a pen but voiceless, the other an anthropologist without a degree but with a voice that would not be silenced. Together, as a century was ending, we co-mothered a book.

No jewel, no; only a flawed, messy, entangled web of stories, longings, dreams, joys, sorrows, and heartaches that couldn’t be forgiven.

I like to think that in the next world, which my comadre most definitely believed in, she will slowly forgive everyone who ever wronged her. This will take a while. There were many. But there is no rush. She has won eternity. ¡Adiós, comadre!