On Monday, December 8, 2014, the Association of Black Anthropologists issued a Statement Against Police Violence and Anti-Black Practices. The Statement followed from recent events in the USA discussed and acted upon at last week’s annual meeting of the American Anthropological Association in Washington, DC (#AAA2014): a die-in held on Friday, December 5 at 12:28 pm in the main lobby of the conference hotel, and later that same day, a section assembly motion on Michael Brown and Eric Garner, racialized repression and state violence was presented and approved by the AAA membership at the AAA business meeting. The die-in was planned and motion drafted Thursday by a group of anthropologists at special sessions on Ferguson, racism, and violence; this organizing work continues at the #BlackLivesMatterAAA website. Both the Statement and the Motion are published in full below.

The Association of Black Anthropologists condemns, in no uncertain terms, the ongoing terrorism waged against Black U.S. communities by the state, police, and White vigilantes. We condemn the executions of our boys and girls, women and men by the police in Ferguson, Staten Island, Saratoga Springs, Los Angeles, and throughout the country. We also recognize that these forms of state violence are perpetrated against Black people globally. We are enraged by the fact that no police officer has been indicted in the recent murders of Aiyanna Jones, Michael Brown and Eric Garner; and we are outraged that in the hundred days since the murder of Michael Brown, police have also murdered unarmed Ezell Ford, unarmed Tanisha Anderson, unarmed Roshad McIntosh, unarmed Akai Gurley, unarmed Dante Parker and unarmed Kajieme Powell. These are state-sponsored massacres of our people, massacres enabled by a long history of national and global anti-Blackness.

As it pertains to the ongoing atrocities of the criminal justice system in this country – alongside those who spoke before the United Nations in November, we charge genocide.[1]

As members of the academic discipline with the distinctive history of establishing the language and “science” of race to justify settler colonialism and slavery, we recognize full well that the root of today’s anti-Black state-sponsored violence in the U.S. is white supremacy. We know that our discipline played a significant role in developing the trope of a particular Black subject – the “urban” Black – that has been deployed by society at large to dehumanize Black people.  At the same time, we also realize that our discipline has been tepid in fruitfully acknowledging and addressing its own white supremacist foundation. We therefore call on our colleagues in the American Anthropological Association to join us in not only condemning this history but also in affirming that Black Lives Matter – beyond the role of ethnographic subjects and cultural vessels. We call on our colleagues in anthropology to stand against the U.S. state’s terrorism against Black and Brown peoples. We call on our colleagues to join us in demanding redress and restitution, with expediency.

As Anthropologist Zora Neale Hurston is known to have said, “If you are silent about your pain, they will kill you and say you enjoyed it.” We will not be silent. For members of the American Anthropological Association to be silent at this time given our discipline’s historic complicity in establishing the current order, and when we have the means to make a difference, is criminal. 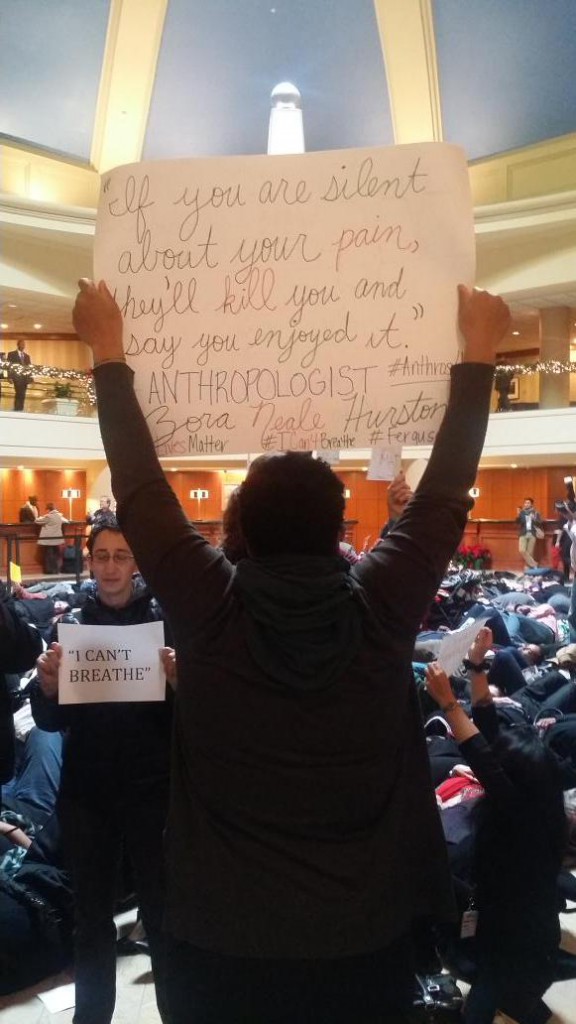 The Section Assembly of the American Anthropological Association is outraged by the failure of the Ferguson and Staten Island grand juries to indict the police officers who killed Michael Brown and Eric Garner, and the dismissal of the case against the officer who killed 7 year old Aiyana Jones.  In the hundred days since the murder of Michael Brown, police have also murdered 12 year old Tamir Rice, Ezell Ford, Darien Hunt, Aura Rain Rosser, Tanisha Anderson, Roshad McIntosh, Akai Gurley, Vonderitt Myers, and Rumain Brisbon, among others – all unarmed. These incidents reflect a blatant disregard for the value and dignity of their lives and the communities in which they live. These events are representative of a broader U.S. history of systematic anti-black violence, dating back to the enslavement, lynch laws, and the prison-industrial complex that affects black children, men, women and gender queer people.

As members of an academic discipline with the distinctive history of establishing the language and “science” of race, which has been used to justify settler colonialism and slavery, we understand the roots of this state violence. While U.S. ideologies hold that we are all equal under the law, this has never been the case, and in fact inequality has been structured into the justice system from the start, and is currently escalating via the militarization of local police forces.

To this end, we want the Executive Board of the American Anthropological Association to: 1) make a formal statement condemning these activities and structural conditions, 2) create a Task Force to explore issues related to racialized police brutality and extra-judicial violence; and 3) call on the U.S Justice Department to review the use of force by police and to make a commitment to working for the eradication of racism and racialized state violence. 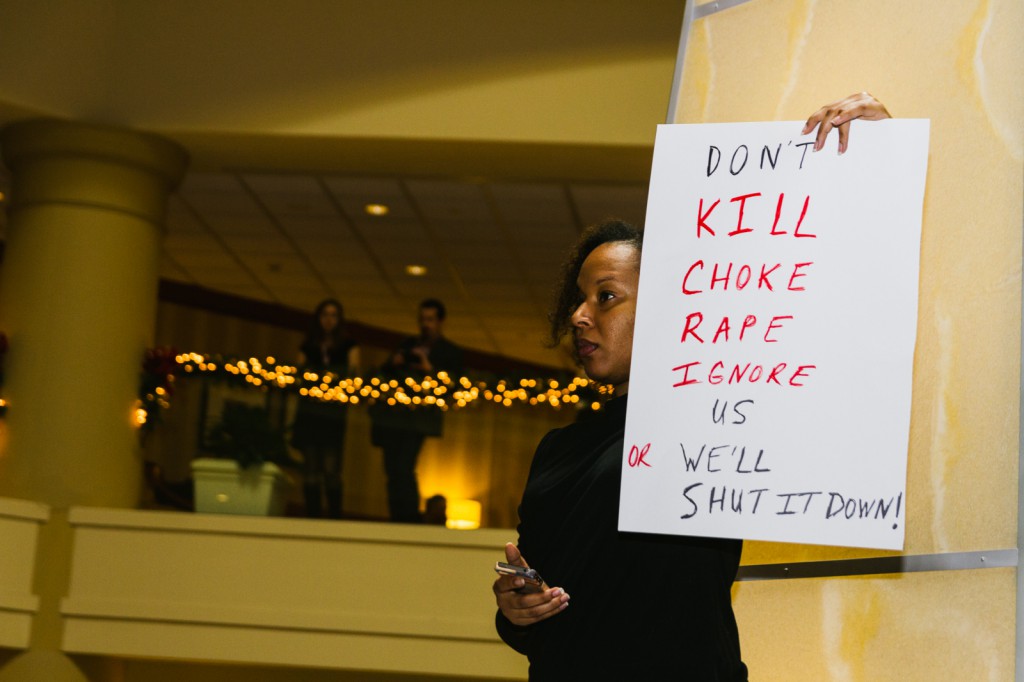 Action and Organizing at the AAAs

For many people, this year’s AAAs was like no other. Who knows when the last time was that so many members attended the organization’s business meeting? Energy and commitment was palpable, powerfully so at the business meeting as the vote on the above Section Assembly Motion followed a landslide vote to continue discussion and education on a possible boycott of Israeli education institutions. Political crises brought scholars together across fieldsites, generations, issues, and more. ABA member Bianca Williams (Colorado) speaks to this sense of momentum:

“The activities and energy at the AAA has truly reestablished my faith in our discipline. I worked diligently with folks from different walks this past week—ABA members; researchers who study police violence; anthropologists from all four fields; AAA Executive Board members; passionate graduate students; and scholars who have been committed to fighting anti-Black thought and practices–to ensure that anthropology clearly stated and demonstrated its investment in destroying the structural racism that facilitates an environment where Black lives are devalued. The die-in, the major presence at the general body business meeting, the support of senior anthropologists, and the ABA’s statement lets me know, and hopefully lets others know, that anthropologists are committed to fighting this struggle for the long term, as we have particular theoretical and methodological contributions to make. For me, this is what engaged anthropology looks like. Hopefully AAA 2014 was a call to action for all anthropologists.”

We are learning as we are acting too; a powerful image went up on Twitter of AAA President Leith Mullings (CUNY, The Grad Center) guiding younger scholars in the ways of AAA bureaucracy, on task forces and sections and motions, and how to get things done. 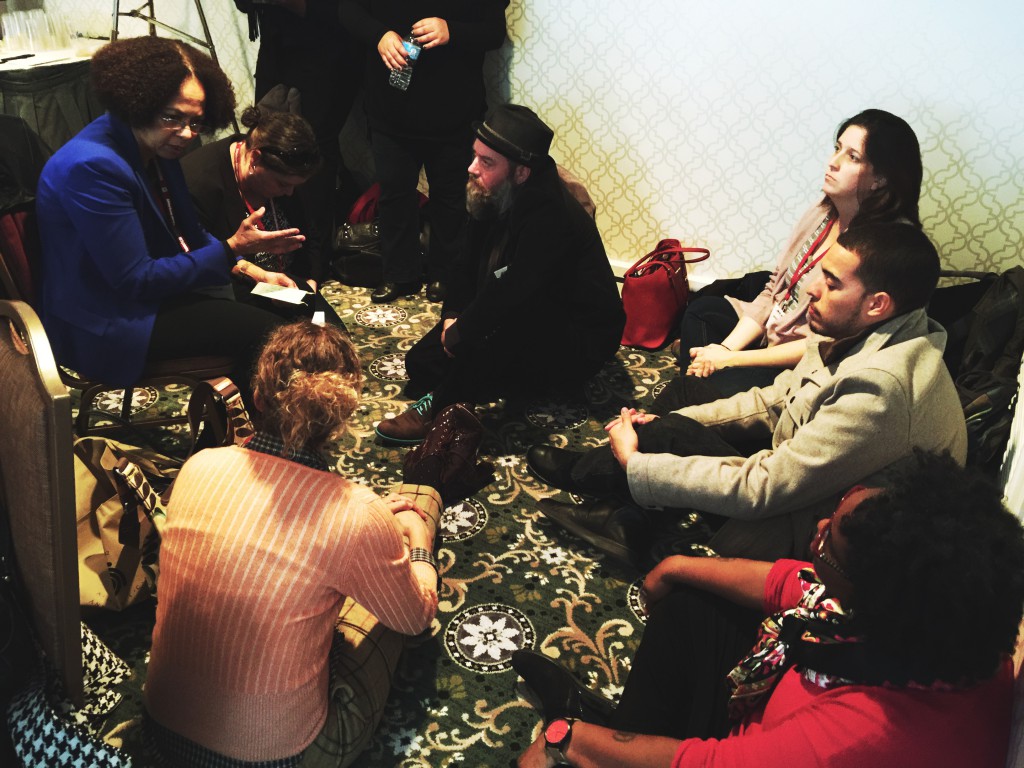 In reflecting on #AAA2014, Aries Dela Cruz (Rutgers) captured the sense of possibility for work inside the AAA that speaks to and with the outside world:

“This was my first AAA as a new anthropology student, and what it has taught me is that our discipline can be most effective and affective when we respond to a political moment. The public takes us seriously when we speak in a language that’s relevant to them, understands their grammar and modes of being. In addition to physically symbolizing racialized repression and state violence, the die-in laid the groundwork for the motion to be overwhelmingly passed by the section assembly.

All over the world, people can now see anthropologists as a resource they might be able to access in their local communities as allies, as people who can train them to conduct ethnographies of police departments to be able to be used in civil rights lawsuits.”

How can we best use the institutional spaces and structures available to us? How can we transform these spaces and structures as needed? One thing is for sure: our ethnographic knowledge, our teachings, our energy is needed now inside anthropology as well as outside of it. Next year in Denver….and between now and then, there is much work to be done.

With thanks to Whitney Battle-Baptiste, Aries Dela Cruz, Marco Hill, and Bianca Williams for photos, stories, and help putting it all together. For more photos from the AAA Die-In, see Marco Hill’s website.

One thought on “#BlackLivesMatter and #AAA2014: Die-In, Section Assembly Motion, and the ABA Statement Against Police Violence and Anti-Black Practices”