Halloween is a big deal in my house. Honestly it wasn’t anything I cared much about until I had kids. Having kids makes all the holidays more fun! Things really got out of control when we moved to Hilton Village, the “destination neighborhood” for trick or treaters in Newport News, Virginia.

People come from all over town to bring their kids to our neighborhood for Halloween. When folks move here I warn them: It’s like a street carnival! When we lived on a side street I’d go through 300-400 pieces of candy. We had a friendly rivalry with the retired couple across the street for most outrageous yard. A holiday I never cared about became one of the highlights of the year.

After my wife earned tenure and we bought a bigger house on Main that really upped the ante. It’s the first house on the right as you come into the neighborhood, making it ground zero for the Halloween onslaught. We are literally the gateway to the neighborhood. This year the party fell on a Friday, that only encouraged more folks to come out and stay longer. Last week I gave out 30 lbs of candy, 100 glow sticks, 200 stickers. It was a mob scene.

Gentle reader, this is an old post. I wrote it last year and hesitated for whatever reason. I quickly remembered it once I read this letter to the popular advice column Dear Prudence in which the correspondent feels put upon by the obligation of passing out candy to the kids from other neighborhoods. The original inspiration for the post came from this image, collected from my Facebook newsfeed via the reliably righteous Latino Rebels. I no longer have the link it came from (sorry), but my notes say it was first shared by ABC 15 Phoenix. 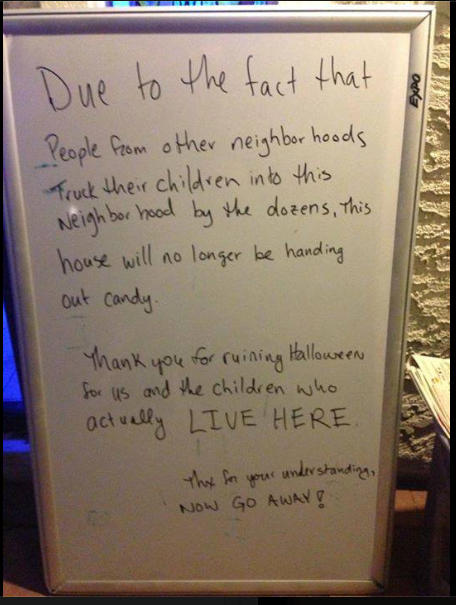 I know just what’s going on in this sign and in the crabby letter to Dear Prudence. The kids from other neighborhoods are brown and black.

I live in a white neighborhood. Chances are if you live in a city in the United States it is, to a greater or lesser degree, racially segregated. Here in the South the black part of town is literally on the other side of the tracks. Downtown is the shipyard and the coalyard, cross the railroad to the low lying land that floods in the hurricanes and its mostly black families. But upriver, past the bridge to pricy Isle of Wight and Smithfield where they make the bacon, is Hilton.

Why take your family to Hilton on Halloween? A federal housing project from 1918 for the shipyard workers that built the navy that sailed to Europe in WWI, Hilton boasts sidewalks on both sides of the street. The houses are all close together and the streets are narrow. Hilton is safe and well lit. Its recognized by the American Planning Association as one of the “Great Places” in America. I tell people its like living in a Norman Rockwell painting. And the city bus passes right by.

The middle class families in Hilton can afford to put on quite a show for the holiday. Me? I go all out. Decorating my house for the holidays is my favorite bourgeois indulgence. Each year I drop cash on decorations, candy, costumes, and beer. It took hours of leisure time to get that all set up and hours of leisure to take it all down last Sunday. Say you don’t want to go all out. Even if you want a few jack’o’lanterns and to pass out candy you’re going to drop seventy bucks or more right there.

Does this sound a little noblesse oblige? Kinda?

Let me tell you it is an honor to be the first white neighborhood, buffering the million dollar waterfront homes from the shipyard and railroad. And it is a joy to see all the kids enjoying the role reversal of Halloween/ Samhain/ Misrule/ Dia de los Muertos. You have your princesses and ninjas. The twelve year old girls with long, skinny legs and the toddlers scared by the weird faces and macabre lights.

Minecraft was big this year for boys, Ella from Frozen for girls.

You also see the kids with no costume at all and a pillowcase or grocery bag to hold the loot. Or the boys who come in their football uniforms and the girls in their cheerleader outfits.

And for them we had a group of teenagers putting on an choreographed dance routine in their front yard. A girl popping out of an open grave to pass out candy. Somebody with a high end digital projector broadcasting horror-themed animations onto a window screen. Fog machines! Inflatables! The old man with the license plate “GSTBSTR” who passes out cheap toys from Oriental Trading. The Presbyterian church had hot coco.

We have a thousand people, laughing, smiling with their kids, out in the street at night and no cops. No. Cops. Open container? Nobody cares. I’m drinking beer and eating chili in the cool autumn night outside with my front yard full of strangers.

Ever throw a party but nobody came? Those parties suck. Thank God for the kids from other neighborhoods. At least one night out of the year kids rule and get to stay up late, eating candy, playing dress up, and telling the adults what to do, structural racism or no.

16 thoughts on “The kids from other neighborhoods”