Earlier this year (2014), I was cleaning out my room at my parents place in New Jersey, going through old boxes, trying to make sense of decades of saved letters, newspaper articles, early printed emails, and old address books. During this time, I came across my first (and only) philately kit with the stamp tongs, magnifying glass, and a perforation gauge, all barely recognizable with age. I must have been about eight when I was gifted this by my maternal grandmothers’ brother who had the year prior brought me a stamp book from England. I remember him telling me it was a fun and educational hobby and one that would make me worldly. The year between the two gifts, I was an avid and easy stamp collector. The year the kit came into my life, I spent much time picking stamps up carefully with my stamp tweezers/tongs and placing them into various stamp books, photo-albums-converted-into-stamp-books or slid them into translucent envelopes. I forgot to collect. I began to curate. I thought more about how groups of stamps might go together, rather than see what was in circulation. The kit-ed-ness created a structure of how the stamps were handled, thought of and collected. Admittedly, I was too young then to recognize how this might be a critical insight into the production of national archives, or to recognize the desire of my grandparents to make me ‘worldly’ at eight as some inflection of postcolonial aspiration.

In April 2011, Abu Dhabi hosted the 17th GCC (Gulf Cooperation Council) stamp exhibition, a well attended and received event. The newspapers covering the exhibition remarked on how significant stamps were to heritage. On display were stamps from the national archive, demonstrating ‘national consciousness’ prior to becoming a nation (i.e. pre-1971), as well as representing a more global and cosmopolitan outlook. Postal services in what is now the UAE began in Dubai in 1909 by Great Britain but administered by the Government of India. Neil Donaldson, in The Postal Agencies in Eastern Arabia and the Gulf (1975), discusses how throughout the 19th century (until 1946), Political Residents and Political Agents living in the Gulf states were all appointed from the Indian Political Service. As postal services became necessary, it was the Indian Postal Department that opened up offices in Muscat (1864), Bahrain (1884), Dubai (1909) and in Kuwait (1915).

Civil mail from Sharjah went through Dubai until 1963.

July 10th, 1963 Sharjah opened its own postal office, issuing its own stamps and postal stationary under the name of Sharjah and Dependencies (which included Kalba, Khor Fakkan, and Dibbah). During this time, there were also some unauthorized overprints that were in circulation. Although Sharjah and her Dependencies joined the UAE in December of 1971, it was not until July 31st, 1972 that the UAE assumed full postal responsibilities. Since most of Sharjah’s visual stamp culture was not really UAE specific, many UAE stamp catalogs do not list them.

These (below) are some of the first stamps issued by Sharjah in 1963, all of which I have “collected” images of from Ebay:

From left to right, the first has a portrait of Sheikh Saqr (III) in the top right corner, with the flag of Sharjah fluttering over a map of the Trucial States, and is a 1 n.p. (naya paisa or new money/currency). It seems to be a reasonable and well placed first issue: it establishes the figure of authority, the symbol of authority and the location of that authority. The next three stamps, the World Health Organization (WHO) and fight against malaria campaign (illustrated by the mosquito and the WHO emblem), the Freedom from Hunger campaign, and the International Federation of Red Cross/Red Crescent Centenary stamps immediately propel Sharjah into international concerns and through the issuing of such stamps, places Sheikh Saqr as one who commands authority in issues related to international well-being. The visual representations on stamps can be coded as, what Michael Billig calls, banal nationalism (1995), that is, the everydayness of nationalism and national rhetoric. Pauliina Raento and Stanley Brunn also used this framework to look at the visual culture of stamps in Finland (2005). However, in the case of Sharjah and her Dependencies, 1963 continues to be pre-federation (and thus pre-nation). Through the issuing of these stamps, Sharjah establishes distinct visual registers for domestic and international codes. Codes that are indicative of an autonomous region, not one subservient to British (or regional) interests.

In line with this observation, 1963 marked another very significant moment in my Ebay stamp image collecting. I found this stamp image (shown below) in memoria of the assassination of (US) President John F. Kennedy. This stamp is considered a overprint. The overprint says, In Memoriam John F. Kennedy 1917-1963. Overprinting is technically something that makes a stamp inauthentic and not collectable. And yet, this stamp is used and it circulates at the time (as per the cancel marks on these stamps – also seen on Ebay). It is at this juncture that Ebay begins to provide me with a new visual public history, one that is simultaneously geo-politically informative and intimate.

JFK’s death left a very deep impression on Sheikh Saqr. Not only were stamps issued in memoria, but on the first year anniversary, a coin was also minted with JFK’s portrait on one side, and on the other, the flags of Sharjah. This first year memorial coin is written about quite a bit by coin collectors on various sites because it garners much interest for its subject matter and unexpected minting location. However, it is considered inauthentic by some because it was not authorized by the British. Its minting was authorized by Sheikh Saqr.

This linked Sharjah’s interests with the US and directly against Britian but in a manner that Britain could not politically protest. I could just leave this suggesting a political move, but after reading a bit on Sheikh Saqr, I actually do think he was deeply moved by JFK’s assassination. Although after the fourth year of commemerating JFK’s death anniversary (see below), there are not many more stamps for JFK circulating on Ebay. 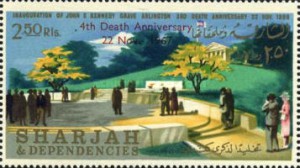 I am particularly fond of the overprinting and the unofficial (and thus unauthorized and inauthentic) stamps and coins. In this counter heritage Ebay narrative, Sheikh Saqr emerges as a worldly, scientific and thoughtful man — at least in terms of making decisions about what gets issued on a stamp, and the sorts of global ‘stamp’ discourses Sharjah (and her dependencies) may engage in during that time.

Counter heritage is necessarily fleeting and so I do not despair when I find stamps and they are only available for 22 hours. I know they will resurface and will circulate. And I will continue to be on the look out for them as they belong to a decade (1963-1972) that provides a glimpse into an unacknowledged aspirational postcolonial state.