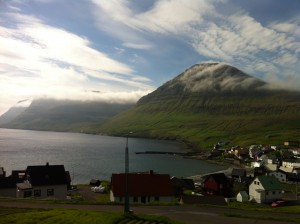 We interrupt this arctic/energy blog series for a short detour to the North Atlantic. Every category has its boundaries, and there are many places we know are not definitively in the Arctic, but seem somehow to sit in the overlap. The Faroe Islands are not in the polar circle (62 degrees North) nor particularly cold (ave summer temp 11 celsius), not very icy (sitting in the Gulf Stream) nor home to an indigenous people (mostly Viking and Celtic ancestries) but there is a strong affinity with northern islands and a sense that perhaps we ought to think of an area of sub-Arctic encounters.

The Faroes are known for fishing and sheep – producing the wool that famously clothed the Sarah Lund character in Danish televisions ‘Killing’ series. Faroese wool is often mixed with Falklands wool, and there seems to be some kind of sub-polar logic to this coupling. 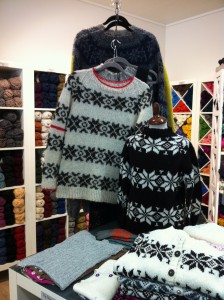 Cruise tourists sailing from Scotland or Denmark also call in at Torshavn, capital of the Faroes, where a thousand visitors may call in for just 4 hours on their way further north to Iceland or across the North Atlantic. A hundred at a time are bussed across to tiny harbour villages like Gjógv to be served pancakes at the turf-roofed Gjáargaður guest house and admire the cosy Faroese knitted sweaters at the hotel’s minute boutique. With American tourists, there is the emotive question of whale-eating, although the wind-dried lamb raises less social awkwardness or political embarrassment. On these dramatic basaltic islands, tourists can have their minds truly blown, as one visiting Australian put it – words like ‘mindblowing’ and the phrase ‘I’ve never seen anything like this’ hang in the air waiting to be passed around from visitor to visitor. It truly is a spectacular landscape, one that is anticipated by dramatic images and tourism-promotion by-lines, newspapers accounts of the ‘lovely unspoilt islands’ (National Geographic Traveller’s ‘most appealing destination in the world’) or ‘the most curious place left on Earth’ (NY Times).

It took a long time for the Anthropology of Tourism to become mainstream (and in many teaching departments it remains on the fringes, if at all), probably because tourism has an uncomfortably close relationship with anthropology. Early anthropological accounts often strove earnestly to distinguish themselves from travel writing, to be scientific and universal rather than trivial and pleasurable. Perhaps this explains why so many anthropologists are excellent at making fascinating topics seem so tedious. But there are other dimensions to this relationship. Anthropologists often follow in the footsteps of other travellers, be they missionaries or colonists (especially in the early days), and anthropological reports can themselves be instrumental in opening up destinations for other travellers, particularly the more famous or sensational reports and films. A really popular ethnography can spark a desire for others to experience the same destination, as much as we may prefer not to acknowledge it. Jonathan Swift was well aware of the irony, pre-empting the ethnographic account in the style of adventurous travellers – Gulliver’s Travels should be required reading for History of Anthropology (alongside Anzia Yezierska’s Hungry Hearts, in my view).

This is an anniversary year for the anthropology of tourism. In the 40 years since the workshop that brought us Hosts and Guests, we have learned a lot about tourism. We know that there are many people involved in tourism who are neither host nor guest. We know that tourism marketing is dominated by a certain kind of imagery, and that tourism itself involves moving bodies, human and nonhuman. We also know that tourism includes a large variety of texts and documents. If tourism is a way of ordering the world, then images and texts are among the tools that are employed for this task. Anthropology is starting to take documents seriously (Annelise Riles has helped here) but it is early days in many ways. Ethnographies of journalism will help us, as will ethnographies that go beyond analyses of marketing materials and delve into the world of destination management organisations.

At Arctic Encounters we are heading in this direction as well, and welcome examples or links to others working on these questions. In the Faroes this week we are tracking texts in the making. The airline and tourist board co-fund a third party marketing company to run press trips, sending out an invitation on travel journalists’ networks for an all-expenses paid trip from London to the Faroes for four days of walking and visiting. Journalists are chosen if they can offer a commission to publish that provides value for the tourism industry on the island. On this tour, there are half a dozen journalists and writers who will publish either with their own company or specialist hill walking publications, or news media travel sections. Their work is not so unlike that of the ethnographer – observing the trip, making notes about the places visited, and their impressions of the tour. Nor are they unlike tourists on a small group trip, getting to know one another over the days, creating joking relationships, sharing stories and snippets of information about their lives and their work.

These are writers who publish prolifically, some have several books published already, some producing guidebooks to several different countries, speaking several languages, and some publishing high quality illustrated coffee table books. In their thirties to their fifties, some also run their own businesses, guiding companies or publishing, or as sole traders, publishing in different countries. There is only one English-language guide to the Faroes, published by Bradt guides, and it is well used by these visitors, as are the guides and maps produced by the tourist office, so information is recirculated at this stage. This includes maps and ‘facts’ (physical geography, demography), brief historical accounts, and sumptuous images of wildlife (puffins feature), dramatic cliffs, and landscape shots of colourful houses clustered around natural harbours, with whitewashed churches, steeples peeking above the villages. These documents employ familiar tourist semiotics to open up possibilities for visitors, and gently instruct them why they are here and what they might want to see and do as an essential part of the ordering of the world that tourism does. This is participant observation, and part of the participation will be to write like a travel-writer. That is more difficult to observe, but a one-day workshop by travel writers and publishers under the Arctic Encounters banner was a good way for me to start trying to think like a travel writer and document the process.

0 thoughts on “Tourism Texts and the Sub-Arctic”