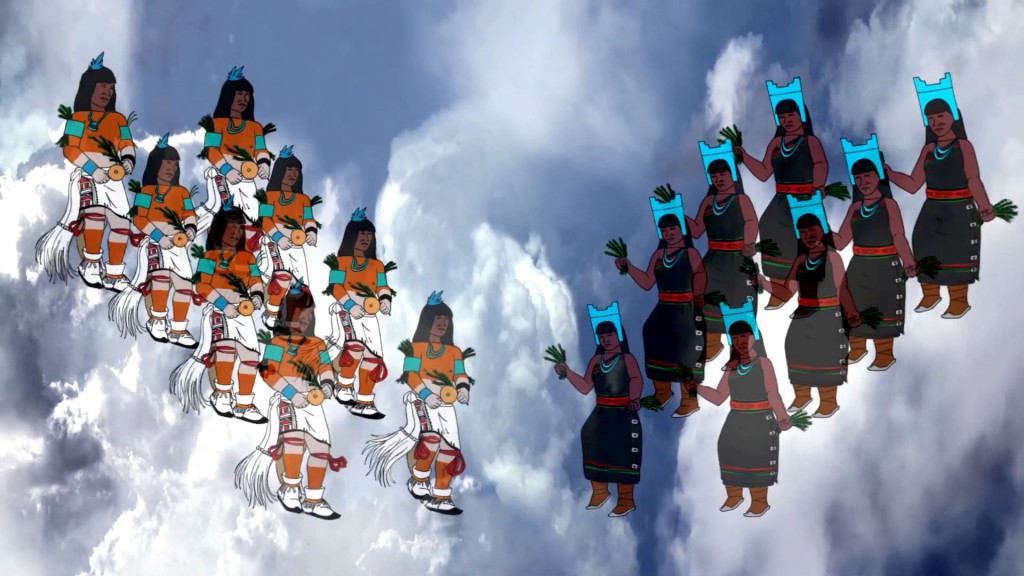 The late Pueblo historian, Joe Sando, a member of Jemez Pueblo in New Mexico called the Pueblo Revolt of 1680 the “first American Revolution.” Although this event remains mostly unknown and may seem distant history to an outsider, the Pueblo Revolt in New Mexico is living history. It is evoked continuously today and remembered in Pueblo and Nuevomexicano communities as a seminal moment defining Pueblo autonomy and cultural sustainability. In popular culture, the Revolt is retold in historical commemorations, performed in ceremonial dances and religious celebrations, and is increasingly the inspiration for works of art. In 2011, John Jota Leaños, acclaimed Xicano artist and Associate Professor of Social Documentation at the University of California at Santa Cruz, asked me to participate in the research and production of an animated documentary about the Pueblo Revolt. The film, Frontera! : Revolt and Rebellion on the Río Grande, was completed this year and is the first installment in a series of short documentary animations that narrate uncovered (and unresolved) histories of the US-borderlands.

As a native Nuevomexicana, I understand that there are many different perspectives on the Pueblo Revolt, the violent uprising that expelled the Spanish colonizers from the region only to have them return with a vengeance twelve years later. All of the artists and scholars who participated in the making of Frontera! were keenly aware that in making a film about the Pueblo Revolt, we had also accepted an immense responsibility. Multiple versions of the Revolt live within the diverse Pueblo communities and it is considered a sacred story. Although it was not possible to capture all of these perspectives in a twenty-minute animation, we incorporated anthropological methods and assembled an amazing team of collaborators to help us tell the story.

Some of these individuals were prominent southwestern archeologists including Robert Preucel and the late Linda Cordell as well as Matthew Liebmann, the author of Revolt: An Archaeological History of Pueblo Resistance and Revitalization in 17th Century New Mexico (2012). We also interviewed native scholars such as Joseph “Woody” Aguilar, of San Ildefonso Pueblo a graduate student at the University of Pennsylvania and a rising star in Pueblo Revolt archeology. We interviewed Pueblo leaders and community members about the continued significance and relevance of the Revolt for people today. Many of them told us that it was important for people outside New Mexico to learn about this pinnacle moment in American history. The oral history component of Frontera! is on-going. Our goal is to create an interactive e-book to accompany the film that will serve as an archival resource including all of the interviews, scholarly essays, interactive cartography and new archeological evidence that we collected about the Revolt.

While gathering historical and archeological evidence was essential to the making Frontera!, we also wanted to tell an engaging story that would appeal to diverse audiences. This film is for and about our communities. Our aim is to place the voices, aesthetic sensibilities, and storytelling talents of Pueblo and Chicana/o artists at the forefront of the project. Characters narrate parts of the story in a playful and colloquial fashion and the visual imagery is comical and ironic. For example, a female character tells the story of Coronado’s futile search for the mythical Seven Cities of Gold from inside a modern-day casino. Other aspects of the film –like the history itself – are darker and serious, taking on the quality of a noir graphic novel. What makes Frontera! unique is its multivolcality. It merges myth and memory, history and the present, creating a brilliant tapestry of visual and musical styles.

This week, leading up to the premiere of Frontera! on March 20th in Albuquerque during the Society of Applied Anthropology meetings, I will be posting essays and commentary about the film. We invite Savage Minds readers who are coming to the conference to attend the screening. You can also watch the film on-line and join in the conversation.