Framed by the public debates surrounding the Osage Nation’s moment of constitutional reform in the mid-2000s this ethnography illuminates the diversity of ways Osage define themselves and imagine their future as a polity, creating and negotiating ideas of self and nation. The first book from Jean Dennison, assistant professor at the University of North Carolina, Colonial Entanglement makes a strong contribution to the study of American Indian identity. It will be a must-read for anyone working with Native nations in the midst of institutional reform. 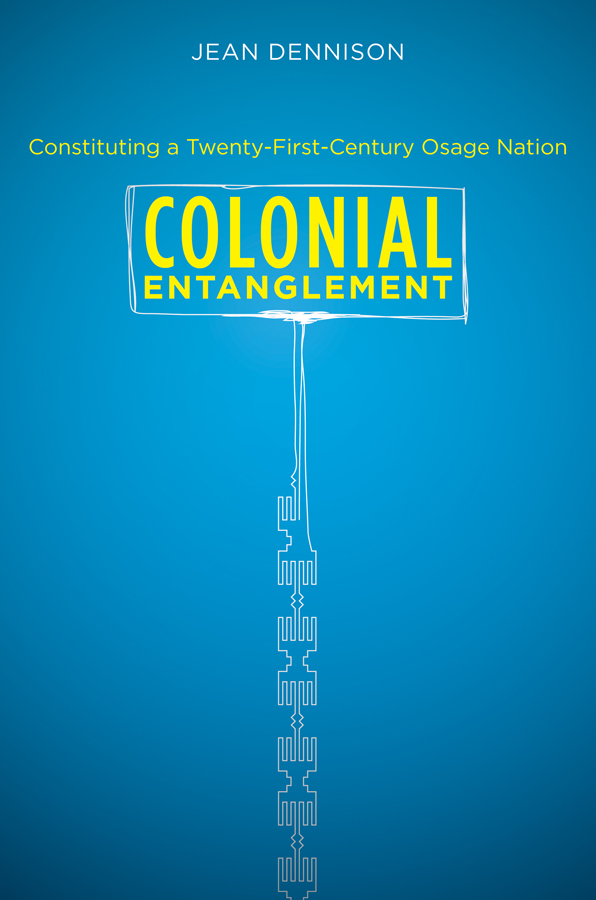 Contemporary relationships between Native Nations and their land can be shaped by complicated colonial histories. The Osage situation is especially convoluted! The colonizer did something unique to the Osage and Dennison begins by orienting the reader. In 1906 when the reservation was allotted, the mineral rights were separated from the surface lands. Some Osage held mineral wealth as a collective but all individuals held their land as ordinary private property. Thus the tribal membership roll is greater than the number of members with shares in the mineral trust. To be an Osage citizen you have to be a lineal descendant of someone on the 1906 roll, but all the headrights to the mineral trust were distributed at the moment of allotment. To have a share of the mineral trust you have to be descended from someone who was allotted and that’s a more select group than those who are enrolled.

The author shares a family anecdote.

My grandfather, George Orville Dennison, was born eighteen months before the July 1, 1907, cut-offf date, and so he received three 160-acre parcels of land within the Osage reservation, a 1,230 share of all monies produced from the Mineral Estate, and, when he turned twenty-one, a vote in Osage elections. His two brothers, who were born after the 1907 cut-off date, received nothing and no voice in the government. This led my great-grandmother to distribute my grandfather’s money among the three boys, until my grandfather married and his wife put an end to the redistribution. These Mineral Estate proceeds divided the family, leading my great-grandmother to favor the brothers’ children at gift-giving occasions, rather than my grandfather’s children. This further estranged my father from the larger family, who as a young boy did not understand the unfairness. This money also divided the Osage Nation, as a growing percentage of Osage descendants were disenfranchised and began fighting for equal voting rights.”

This has had profound consequences for the constituting the current Osage political scene.

While in 2004 all lineal descendants of the 1906 roll were eligible for membership cards and for many tribal services such as health care and partial college scholarships, they could not elect tribal officials or run for office unless they held a headright. Nonshare-holding Osage were counted in order to gain access to more federal grant dollars, but these same individuals had no say in how these funds were spent.

One of the consequences of this has been that for the most part of the past 100 years the Osage government has been primarily concerned with the management of the Mineral Estate and only share-holders, Dennison calls them annuitants, could vote. Over time this meant that most descendants only ever got fractions of a vote and since citizenship is separated from voting, there was a growing population of disenfranchised Osage who could not vote at all.

There were multiple attempts to rewrite the Osage constitution and for multiple reasons they failed. Dennison’s fieldwork joins this story in 2005 and she charts the public debates surrounding the reform efforts leading up to a new constitution in 2006. Debates which are characterized by skepticism and cynicism on the part of the citizenry as the reform commission, none of whom seem to trust each other, was composed entirely of annuitants. Growing out of observations made at reform commission working meetings and forty-plus community meetings, Dennison’s ethnography focuses on four entangled discourses where Osage were negotiating their identities and imagining their nation’s future: blood, culture, minerals, and sovereignty.

Discourses of blood are ubiquitous in Indian Country, often bound up with notions of who is “really Indian,” something which Dennison shows to be, in the context of constitutional reform, completely antithetical to a notion of national  citizenship, something which is by definition non-biological and can change over the course of a person’s life. The book provides a succinct introduction to the colonial racial ideology of blood as part of a settler plan to eliminate Indian claims to land, later becoming politicized when, in the allotment era, it was linked to competency perceived as a racialized trait.

In the contemporary political scene Dennison finds that some Osage felt that if their new constitution lowered the blood quantum it would make them too White and threaten their federal recognition while others were certain that there were fraudulent names on the 1906 roll. Dennison is not dispassionate about the opinions and decisions of the Osage citizenry. With clarity she advocates for eliminating blood requirements. Discourses of blood, she argues, jeopardize the future of the nation.

It is with discourses of culture that the Native Nations become bound up with anthropology and the Romanticism that underpinned early European nationalism. In the constitutional reform movement this becomes manifest as a strong desire for American Indian nations to insert “culture” into their governing documents. This is, in part, something advocated for by the Harvard Project on American Indian Economic Development, which concluded that native governments function best when they reflect the culture of the people they are meant to serve. For some Osage Dennison speaks to Native sovereignty stems from culture practice, “Because we do certain things…” we are recognized as a government. Without this “culture” there will be no federal recognition.

Dennison is critical of this idea too. She writes, “When Osage culture is deployed as a tool for recognition it risks becoming static and having to live up to other peoples’ standards of what counts as American Indian practice.” Living Indian people fail to measure up to the historical imaginary of what an Indian person is. Culture becomes a burden. And just as with any modern people, many Osage have a only a very distant relationship with the most ancient practices of their culture. Nevertheless, the Osage Dennison speaks with show a desire to maintain at least *some *difference in relation to mainstream America. “The most potent danger in the cultural discourse,” the author writes, “is its potential to limit possibilities for the future of indigenous nations.”

The Osage Mineral Estate was a constant roadblock to the constitutional reform efforts because it created a deep divide between haves and have-nots. The annuitants saw their headrights as personal property rather than an asset of the nation. As a minority in position of all the votes not only were they the ones with the most political power, they were also highly invested in maintaining the status quo. In short they feared a new Osage government would nationalize the Mineral Estate and that would be the end of their checks.

Like discourses of blood and culture, the Mineral Estate is, for Dennison, part of a “continuing colonial process.” Going back to John Marshall’s opinion in the Cherokee cases where he describes Indian tribes as domestic dependent nations, there’s this notion of US government as protector of American Indians. Management of the Mineral Estate makes all Osage governmental affairs closely tied to the US government. Robbing people of self-determination has, over time yielded a colonial psychology of dependence and self-doubt and so it is for some that management of the Mineral Estate can only ever be the federal government’s responsibility. To let the tribe take it over is, in a sense, letting the feds off the hook rather than an expression of sovereignty.

Sovereignty – the defining topic of American Indian Studies today – coexists with blood, culture, and the Mineral Estate as a way Osage people imagine their future. It is thoroughly tangled with the settler too, not only in terms of US law, but for the Osage via ongoing conflicts with Oklahoma state law and county jurisdictions. It is always negotiated and contested by overlapping, competing sovereignties.

Sovereignty is about self-determination and, unlike oil and gas reserves, it is an inexhaustible resource. As the Harvard Project found, Native nations with unfettered self-determination show improved economic development. After the reformed constitution was put into effect in 2006 and the Osage nation moved to take over as many state services as it could there was a concerted push back by the settler community, which makes up as much as 97% of the reservation’s population. Dennison boldly argues that if the tribal constitution limits non-member participation, this provides anti-Indian interests with arguments for circumscribing sovereignty. Non-Indians need reasons to agree to Osage authority such as economic development, unambiguous and secure property rights, and access to services.

At 155 pages, Colonial Entanglement is short enough to fit into an undergraduate course but the governing documents included in the appendix invites a closer reading by scholars. Included are four Osage constitutions (1861-2006), a 2004 act of Congress, and results of the 2005 referendum used in drafting the new constitution.