[This is the 8th1 installment in an ongoing series.] 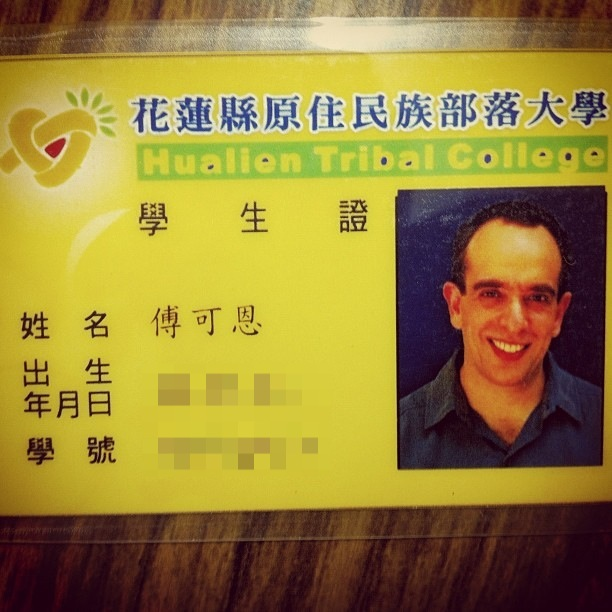 Above is a picture of my student ID from the “Hualien Tribal College.” Actually the official English name on their web page is “Hualien Indigenous Community College” which sounds better to my anthropological ears. Indigenous Community Colleges in Taiwan are not degree granting institutions. Courses tend to be short-term classes focused on indigenous culture, although they offer subjects like documentary filmmaking to help students learn to document their own culture. I’ve enrolled in an eight week course in the Amis language. (At the same time I’m continuing to audit indigenous language classes at my own university.)

While these classes have been great for my research, I still don’t feel I’ve made much progress with my language skills. Unlike DJ, who recently spent half a year living in a village with a large number of old people who still are able to speak Amis, I spend most of my time with young students who have very little competence. But more than that, I’ve come to realize that my research focus on official language revitalization efforts is actually something of a handicap when it comes to language learning. This is what I wanted to write about today.

In many ways it reminds me of my time in Hebrew School when I was preparing for my Bar Mitzvah. Although Hebrew is now a living language, in Hebrew School in NY, at my reform synagogue in the late seventies and early eighties, it was taught as one might teach a dead language. There was no expectation that we would go on to actually use the language in daily life. It was enough to be able to pronounce the words and be able to translate some simple prayers into English so we knew what we were saying when we read it aloud.

This point was really hit home to me when I was discussing with another student that I would like to have better communicative competence. It took a long time for me to explain what I meant, and it slowly dawned on me that other students really had no expectation of being able to use the language in such a way. They were interested in using language learning as a way of learning more about their own culture, and the course is perfectly set up for such goals. Each week we read a text which is transcribed from oral interviews with Amis elders. We then learn a number of vocabulary words and proceed to translate the text. Finally, the class recites the text in unison. There is no expectation that students will construct their own grammatically correct sentences.

The students in the class are from a wide variety of backgrounds. There is a village headman and some older women who speak the language quite well already but can’t read or write very well and then there are grade school and college students, some of whom know even less Amis than I do. The teaching method adopted in the community college has the distinct advantage of working for everyone despite their level, although very little is expected of them. But basically the language is being taught as a dead language, not a living one, and I worry about the implications of that.

On a side note, another thing which reminds me of Hebrew School is that most of the Amis teachers are priests. They also all seem to have a deep interest in Judaism. I’m not really sure what that is about. It is something I have to investigate further… But I think it is different from what this reporter experienced in China.