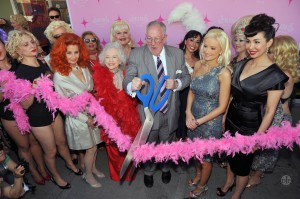 In my last post, I defined a museum as “a social institution where knowledge is communicated through the display of objects.” I then spent quite a bit of time dealing with the implications and ramifications of the word “objects”. But there’s another important part of that definition, one which opens up a significantly different view of what a museum is, and that’s the part about a museum being a “social institution”.

Objects can be displayed in a lot of contexts. I have a bunch of artworks by local Las Vegas artists displayed throughout my home — but that doesn’t make my home a museum of Las Vegas art. Lots of people put together collections of images on Pinterest that communicate knowledge about themselves or topics that interest them, but Pinterest isn’t a museum either.

It’s hard to put a finger on just what that structure is, though I think I hinted at it somewhat when I described museums as generating their own aura, producing in visitors a museum habitus that regulates their interaction with the museum. The relationship a museum has with its audience, consultants, donors, staff, and volunteers is structured by a wide variety of social forces: the cultural capital of the organization (and of its audiences), legal regulation, notions of academic integrity, class relationships, and so on. These forces combine to shape a community, and a community is what transforms hodge-podge of objects, architecture (physical or informational), staff, and audience into a museum.

Or rather, community is the museum.

But I want to go a little further and place the museum and its staff not so much “in relation” to their community of benefactors of various stripes, but “as part of” that community. A museum exists as a focal point of a self-selected community of people who relate to others within that community in various ways.

The “museum as community” idea is very much reflected in contemporary museum practice. One of the most influential voices in the museum world today is Nina Simon, author of The Participatory Museum, advocate of a sort of museum where planning, exhibition development, and administration are done not for a community but with or even in a community. This kind of approach is reflected in, for example, the “pop-up museum”, where exhibitions are assembled on the spur of the moment by members of the museum community — say, an exhibit on the Korean War created by Korean War veterans out of material that they themselves supply with object labels written by visitors and reflecting not necessarily historical fact but visitors’ individual relationshipw with the objects they encounter.

This is a far cry from the Met’s refusal over the first several decades of its existence to be open evenings or weekends to accommodate working class visitors, or the British Museum’s policy in the late 19th century of requiring visitors prove their qualifications before being allowed to view the collection. (Though to be fair, those museums were also communities, just really, really exclusive ones.)

In this time of changing standards of accessibility and transparency, even collections can be part of the community — as in numerous collections of Native American objects which have opened up their collections to the people represented by the objects in the museum’s possession, so that Indians can rekindle their relationships with the people, spirits, and objects taken from their homes in the past and sealed off during the less-open years of the 20th century.

If museums are communities, then, what can we make of the role of Executive DIrector? Is he or she a steward of the institution on the community’s behalf? A shepherd, drawing together a flock to graze in the cultural fields of his or her exhibition halls? A minister, a boss, a teacher, a cloistered monk? I prefer to think of my role, and of my fellow museum directors’ roles, as that of a community organizer, charged with using the resources at hand to empower others in my community to change their lives. Of course, it flatters me to think of myself this way, but given how I’ve come to think about museums, it seems an apt enough metaphor for what a museum director does.

I have a couple of other things I want to talk about in this series — how an exhibition gets put together, and the issue of who funds museums and why, among some other less-developed ideas — but it seems like a good time to ask if there’s anything others would like to see me explore in this space? I can’t promise I’ll answer everything anyone asks, but I’ll certainly think about it. By now it’s clear that I don’t see myself as a participant-observer in this field; I am pretty much just participating, and whatever observing I do is strictly a reflex of my training. But while I make no pretense towards any kind of objectivity (and, frankly, wouldn’t even if I were doing real fieldwork here — objectivity is for robots and the weak-minded) I will, as much as possible, strive to be honest.

9 thoughts on “The Anthropologist in the Museum: The Museum as Community”