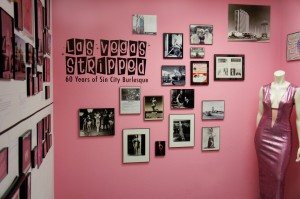 As Kerim noted a few weeks back, I am currently the director of the Burlesque Hall of Fame, a museum located in Las Vegas committed to preserving the history and legacy of burlesque as an artform and cultural phenomenon. If you had asked me a few years ago what direction I expected my career to develop in, I’d have never said “Museum Director.” Sure, I’d taken some museum studies courses in grad school and have worked in a couple of museums, but I always thought I’d help out with an exhibition here and there and that would be the extent of my involvement in museums.

Well, life, as they say, happens, and here I am today, responsible not just for an exhibition here and there but for a budget, a nation-wide volunteer network, a collection of 4,000+ artifacts, and a whole slew of legal, professional, and ethical concerns I’d barely even imagined 5 years ago. Since a) anthropology as we know it today grew out of museum practice, and b) the perspective of a museum worker has rarely been seen on Savage Minds, I thought I’d write up a few posts detailing some of the things that occupy my thoughts and time. I won’t be aiming for any grand theoretical statements here, just some musings on what constitutes life in the museum for this particular anthropologist.

And since it’s the question I deal with most, I thought I’d start with a discussion of what burlesque even is in the first place. Defining the field of study, so to speak. Easier said than done, I suppose — burlesque as an art form grades into and branches off from a lot of other theatrical traditions, and has been in a state of near-constant change for at least the last century-and-a-half.

The simplest definition of burlesque is “parody”, typically parody of the powerful by the powerless. In that sense, burlesque can be found in the very earliest theatrical traditions, with pretty clear burlesque elements being found in the plays of Classical Greeks and, closer to our own time, the work of William Shakespeare and his contemporaries. By the mid-1800s, first in England then in the United States, large productions featuring what were, at the time, scandalously-clad dancing women and men (wearing tights that showed the shape of their legs and bodies as they danced) had become popular entertainments for emerging urban working and middle classes. Authors from William Makepeace Thackeray to Mark Twain to HL Mencken wrote books of burlesques, providing light humor for an increasingly literate populace.

The lavish extravaganzas of the big city productions were stripped down and sexed up for mass consumption by first minstrel shows and then vaudeville-style theaters, transforming by the turn of the 20th century into variety shows featuring skit humor, sideshow-style acts, and dancing girls. While the promise of a flash of tight-clad leg might have been a draw, the stars of the show were the comics, and not a few household names got their start on the adult-oriented stages of one of the burlesque “wheels”, nationwide circuits of theaters supplied every week with a new traveling show: Bob Hope, Abbott and Costello, Jackie Gleason, Red Skelton, and dozens more.

By the early 1930s, two big changes occurred in burlesque, transforming it into something much more familiar to us today. The first is the siphoning off of comedic talent by radio and talking pictures. While comics remained part of the standard burlesque show lineup, many of the best comics left the grind of the road behind and settled down. At the same time, striptease emerged, shifting the emphasis away from the comics. Just in time, too — as family-friendly vaudeville was replaced by movies (the last vaudeville theater was converted to a movie house in the early ‘30s), its cousin burlesque could offer something neither vaudeville nor Code-era movies could: sex appeal.

By the ‘50s, strippers ruled the burlesque stage. But not “strippers” in today’s sense — striptease was never about showing off the naked body, it was about the process of getting there, the slow seduction of the fan dance offering glimpses of the female form, the tortuous tease of the burlesque artist peeling away layer after layer.

Of course, even as superstars like Blaze Starr and Tempest Storm reached the height of their fame, the culture was changing. Burlesque dancers opened the door, but they weren’t the only ones through. By the ‘60s and early ‘70s, topless gogo dancers, mainstream pornography (movies like Behind the Green Door and especially Deep Throat showed in the same movie theaters that showed The Godfather and 2001), even typical beachwear had made burlesque seem quaint, even a little prudish.

But these new developments met different needs than burlesque had. Remember, burlesque wasn’t just about the sex, it was about power. Burlesque is parody — when a poor immigrant girl from the ghetto steps onto stage in a fur coat and pearls and proceeds to take her clothes off, she’s not just showing off her body, she’s making a point about the put-on airs of the rich, the place of sexuality in the lives of people used to satisfying their desires through spending.

By the mid-’90s, burlesque was on its way back, with a new generation of women on the lookout for models of femininity a little more empowering than the bone-thin makeup platforms offered them by the likes of Cosmo. Part retro revival, part performance art, the new burlesque celebrated the diversity of bodies and the power of women’s sexuality (and, as time went by, increasingly offered alternative models of male sexuality and power as well).

Burlesque continues to change and evolve, making it many things to many people. As the director of a museum dedicated to burlesque, I feel very strongly that it is not my place, or my organization’s place, to try to produce a definitive definition of burlesque, to try to standardize the meaning of the word, but instead to reflect the way the meaning of the word has changed and continues to change — and hopefully to feed into that process. That said, I can offer a couple of identifying characteristics, a kind of “Field Guide” to identifying contemporary burlesque.

Basically,there are two characteristics of contemporary burlesque, of which at least one should be present. The first is striptease — burlesque dwells on the act of undressing, not on the state of being undressed. The second is humor — the best burlesque should make you laugh like crazy. That’s the big difference between what happens on a burlesque stage and what happens at a strip club: you almost never laugh at a strip club unless something’s gone terribly, and funnily, wrong. That’s not to say stripping, pole dancing, and other forms of adult entertainment aren’t valid in their own right (and quite a few burlesque performers have and do work in multiple fields), only that they’re not burlesque.

There are other factors that distinguish burlesque, especially today’s burlesque — the control the performer has over her act, choreography, and choice of music; the lack of lapdancing and other direct interactions with the audience off-stage; the typical lower limit of nudity being pasties and g-string; and so on — but striptease and humor are, in my opinion, the hallmarks.

So that’s burlesque, and that’s the world I live in. In my next piece, I’ll explore what kind of place a “museum” is, especially in today’s world of blurred disciplinary and institutional boundaries, always-on communications, and complex representational politics.

55 thoughts on “The Anthropologist in the Museum: What Is Burlesque?”