[The post below was contributed by guest blogger Aalok Khandekar, and is part of a series on the relationship between academic precarity and the production of ethnography, introduced here. Read Aalok’s prior posts: post 1 & post 2]

Interdisciplinarity has been another definitive condition of ethnographic production for me. My formal graduate education has been in an interdisciplinary department, I go to conferences that are interdisciplinary in their scope, I teach within contexts that are highly interdisciplinary, and interdisciplinarity has also been an object of inquiry in some of my previous collaborations. Depending on the day and the audience, my (inter)disciplinary affiliations are located somewhere in between the fields of Cultural Anthropology, Science and Technology Studies (STS), and South Asian Studies. And I do not really anticipate not being interdisciplinary in this sense any time in the foreseeable future. For one, I really enjoy working in such spaces. Reading broadly, connecting laterally across a wide range of scholarship is a highly stimulating experience. And too, interdisciplines can be extraordinarily rich sites of intellectual production: they are, after all, the “trading zones”—in all their pidginny messiness (and “busy” talk)—where new knowledges emerge. They are also, as a colleague reminded me recently, the spaces where the disciplinary aspects of disciplines are somewhat less pronounced. Equally also, not being a credentialed anthropologist makes it that much more difficult to imagine myself as part of a traditional anthropology department, in the context of U.S. higher education at least. For better or for worse, the sidelines, for me, are necessarily interdisciplinary.

And indeed, working within the space of STS has been extraordinarily exciting. For someone previously unschooled in the Humanities & Social Sciences, STS provided an excellent space from which to transition into these very different modes of scientific inquiry. It provided a broad introduction to the breadth of humanistic and social scientific inquiry: our graduate coursework was carried out under the supervision of anthropologists, historians, philosophers, political scientists, sociologists, and STSers alike.

STS also offered a set of tools from which to interrogate the epistemologies in which I had been previously schooled: we read and debated how scientific knowledge comes to assume a seemingly universal character, how science travels, and how it can be complicit with various modes of domination. Needless to say, the experience wasn’t always comfortable: what was being deconstructed, after all, was an entire worldview—my own worldview at that. And this was a fraught exercise from the very onset: much like anthropology’s past complicity with colonialism, STS too had its own demons to contend with. The memory of the science wars was all too recent, and appropriation of STS-like critiques towards delegitimizing scientific authority in politically charged contexts (like those of climate change and evolutionary theory) was an ever-present risk. And yet, the tools for putting back together what we had pulled apart weren’t always readily available: the challenge for us, as I have come to understand it, was to formulate critique while also being attuned to the ecologies in which such critique circulated. It was this kind of figuring out, I think, that animated much of my graduate schooling.

But theorizing from within such interdisciplinary locations was accompanied by its own set of (sometimes unanticipated) challenges. At the Annual STS Graduate Student Conference that rotates between the STS Departments at Cornell University, MIT, and RPI (and in future, York University in Toronto), our post-conference roundtables would inevitably hone in on what we came to label as our “annual identity crisis”: the existential dilemmas posed on account of being a soon-to-be STS graduate ((Some version of this discussion continues, even as I write this post: c.f. here). What exactly is STS? A field in itself that can stake claim to its own body of scholarship? An interdisciplinary area whose boundaries are necessarily unstable and always in flux? A particular disposition which takes the science-society nexus as its legitimate domain of inquiry? All of these, obviously. We charted timelines of STS to articulate our genealogy, we reflected critically on the discourse of STS, we mapped “expertise” to lay claim to our own expertise. 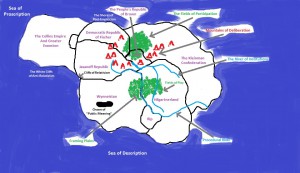 And yet, the sum total of these still did not provide a convincing, leave alone satisfying, articulation of who we are or what we do—even to ourselves. What then were we supposed to say to potential funders and employers? How were we to make ourselves more marketable and more readily recognizable? When disciplines mostly hire their own, and worse, when our own interdiscipline tends to hire those with disciplinary groundings, what exactly were we to do? What were the—mostly academic—niches welcoming of STS?

In contrast, in my (limited) experience of being in the Netherlands, STS is more straightforwardly an entity in its own right: there exists a national STS graduate school, the WTMC, and interdisciplinarity, more generally, is more valued institutionally (through funding agencies, through department organization) than I think is true of the U.S. academy: my present faculty, for example, is organized as a matrix of interdisciplinary departments and research groups, including Arts, Media & Culture, European Studies, the Globalization and Development Initiative, and STS. History, Philosophy, and Political Science are the only disciplinary departments present. My teaching is equally interdisciplinary, and sometimes quite far-field: I am as likely to be teaching an STS course as I am to be teaching one in European Studies. B.A. in European Studies and Arts & Culture (with an option of additional minors) are the only degrees that the Faculty of Arts and Social Sciences (FASoS) awards at the undergraduate level. Interdisciplinarity, that is, is the norm rather than the exception.

And this is no small thing: the institutionalization of STS makes it more easily recognizable, and STS graduates can perhaps more readily find opportunities to, well, sell out. Offices of Technology Assessment, greater societal investment in democratic governance of technoscience, and the existence of a large(r) civil service sector more generally are not be dismissed lightly in this regard.

But increased institutionalization brings with it a unique set of challenges also: it becomes much more important, I believe, to define what canonical STS is and should look like. The same ambiguity that resulted in our yearly identity crises also provided us with the space to claim ownership of the field in ways that we deemed fit: after all, if there really was no way of defining what STS is, we were free to make of the field what we wanted to it be. Indeed, there was no better way to prompt disagreement—amongst faculty and graduate students alike—than an attempt to standardize a core set of readings towards our field exams in Science Studies, Technology Studies, and Policy Studies. Does the space of play for creative appropriation of theories and methods become more constrained as STS becomes more mainstream? Does critique really run out of steam as the faultlines that articulated the interdiscipline—the coming together of the postmodernist currents of anthropology, postcolonial studies, science studies, and women’s studies that gave the 90s so much its intellectual charge (and lest we forget, disagreements (science) wars), for example—seem to shift elsewhere?

More immediately relevant to the matter at hand, interdisciplinarity results also in a displacement of purpose. Not surprisingly, perhaps, STS privileges its object of analysis over any particular methodological disposition or anthropological purpose. What defines an STS project, that is, is its concern with technoscience writ large as a domain of inquiry. A methodological commitment to ethnographic (or any other) rigor is secondary. Culture, site, ethnography, thick description come to be imported into the analysis more-or-less unproblematically, without a corresponding “deep” engagement with the particular conversations and debates through which each of these ideas have historically evolved. Stripped of context, universalized, ethnography—ever so ironically—risks facilitating a “view from nowhere”: threatening to pull the very “god trick” that we often accuse the sciences of. Somewhere along the way to the holy grail (of interdisciplinarity), reflexivity—perhaps the most distinctive feature of anthropology’s epistemic engagements—is often lost in translation.

And so, then: what are meaningful ways of preserving the affinities between anthropology and STS that have been so incredibly productive? What kinds of spaces and what kinds of projects can we envision within the affordances and constraints that interdisciplinarity creates? How do we cultivate an openness towards newer theories, methods, and practices as newer affinities—those between STS and the Arts, for example—seem to emerge? What is the value of interdisciplinarity, at a time when it has come to dominate contemporary scholarly landscapes, both as a privileged means and as an end in itself?

Aalok Khandekar is currently lecturer at the Department of Technology and Society Studies at Maastircht University in the Netherlands. He received his Ph.D. in Science and Technology Studies from Rensselaer Polytechnic Institute in Aug 2010. His personal website can be found here.