This post is part of a series on the relationship between academic precarity and the production of ethnography, introduced here.

Last month I was involved as a planning committee member for a neat little event, the annual Anthropology in London Conference.  Each June the anthropology departments at SOAS, Goldsmiths, LSE, UCL, Brunel, and UEL (and occasionally the London School of Hygiene and Tropical Medicine) come together as a community for a full day of talks and panels by doctoral students, academic staff, and anthropologists at large (mostly but not exclusively based in London).  Unsurprisingly, the planning committee had wanted the theme for the event to somehow reflect both the current atmosphere of the discipline but also of London, the confluence of the 2012 Summer Olympics, the European economic crisis, and the National Campaign Against Fees and Cuts. The theme we settled on—Certainty? (with a question mark)—struck a resonant and suitably interrogative chord.

If the waxing and waning drive for “certainty” deeply frames the academic profession (e.g. the tenure-track as canonical objective) I suppose I’ve had to contend with only a typical overall level of it, but it rarely feels that way.  When I slid from technical employment and a BS in physics and computer science into the social sciences, it kicked off a cognitive and professional butterfly effect I couldn’t return to order even if I wanted to.  Though several of my graduate mentors were anthropologists, I came not out of an anthropology program but rather a program in science & technology studies.  I suspect that many here would concur with my own (mercifully limited) experience as an STS-person the academic job market: the thaumatrope-like character of the field is usually received within more conventionally-disciplined departments as either powerfully “interdisciplinary” or suspiciously “everywhere and nowhere at once.”

Even my dissertation fieldwork—nine months in north India—largely took the form of participant-observation within a school, specifically an institution for the training of satellite image interpreters.  Most SM readers will be familiar with the often dicey proposition of having to explain their fieldwork to funding organizations or governmental agencies charged with evaluation, auditing, or border control.  It may well be that you can’t throw a rock in South Asia without hitting an anthropologist, but throw satellite images and “school as fieldsite” into the mix and you’re pretty much guaranteed to confuse people before you’ve really gotten anywhere.  If I’d had to choose a one-word theme for that work, Uncertainty! (with an exclamation point) might have worked fairly well.

From that perspective my current post is in many ways simply a continuation of that trajectory.  Apart from the time I spent as a graduate teaching or research assistant at my alma mater, to date I’ve been employed by five universities, but in 2009 I was hired into my first permanent post since finishing graduate school, a lectureship with the Anthropology Department at University College London.  My envelope for precarity has been pushed in new directions as the coordinator of an innovative new masters program in Digital Anthropology (see Alex Golub’s nicely relevant post from Oct 2009).  My hire was clearly a bit of a gambit both on UCL’s part (I’m in the vast minority of staff whose PhD is notin anthropology) and my own, but it was also a “no-brainer,” an unmitigated opportunity in the rarified job market and enforced cosmopolitanism of the academy.

It also represented, however, a good bit more than the typical tumult of a first permanent post.  It would simultaneously be my first experience teaching at the graduate level (“postgraduate” in UK-parlance), my introduction to teaching outside the US, and for both me and my partner our first time living in a foreign country (fieldwork aside).  Crucially, it was also my first deep exposure to the British anthropological tradition, the European funding landscape, and higher education in the UK.  I’d love to say the ubiquity of English softened that maelstrom, but anthropology and academia are as rife with idiom and colloquialism as any other culture.  The US-UK shift in language, in fact, is a lot like the shift in driving: in the abstract not so alien…and in fact that’s the problem.  It’s a little too familiar, just enough to seduce you into thinking you know what’s going on as you zip into that roundabout.

There’s been some great discussion on SM over the last year about various “digital anthropologies,” and I may try and engage a bit with that in later posts, but key at the moment is the shimmering mirage that “my fieldsite,” in retrospect, has become in this perpetually disorienting milieu.  Digital Anthropology was a bold move, a long fly ball to left field (a slog over deep forward?) for the house of Purity and Danger, and the intellectual and administrative overhead involved in inaugurating that project has been all-consuming (the forthcoming volume from Berg is only its latest manifestation).  Not least among those challenges has been the immediate relevance of a perennial question near and dear to the heart of contemporary anthropology—the precise constitution of “fieldwork” and “the fieldsite” in an era of accelerating global flows—a question whose checkered lineage would stretch back through work not just on virtual worlds and telecommunications, but diasporic migrations, the expansion of off-shoring, globalization writ large. 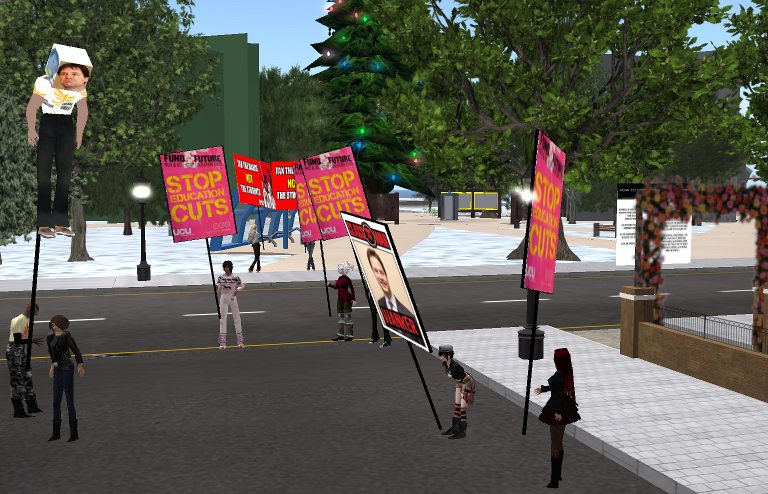 Image caption: A protest against cuts to UK education staged in the London Hyde Park recreation on Second Life, including an effigy of UK Deputy Prime Minister Nick Clegg (screengrab by the author, 2010).

It wasn’t long at all before I noticed a parallel—sometimes disheartening, other times catalyzing—in these two contingent dimensions of my work.  First, the task of translating innovation in anthropological approaches to “the Network Society” into a fertile, coherent, and practical masters programme (only a single year within the UK).  Second, the relentless push to extend my own well-funded and fieldwork-driven research programme—while living and working in one of the acknowledged “core nodes” of that Network Society.  Both these dimensions had as their vanishing point the same question: how to evaluate claims that such-and-such is a “community” or “fieldsite,” that this-or-that activity constitutes “fieldwork” or “ethnography” (see Carole McGranahan’s recent and illuminating post on the latter).

The academic job market in the UK has been no stronger than that of the US of late, and so it was statistically unsurprising when my partner (an anthropologist) landed her own tenure-track post back in the States last summer.  The all-too-common precarities of academic coupledom have meant a year apart, and while we’d had plenty of previous experience with long separations we agreed to reevaluate after the first year.  The fatigue of a trans-Atlantic relationship, London’s cost-of-living, and the affordances of my more malleable professional profile have left us, in this effervescent fountain of precarity, with yet another no-brainer.  I’ll formally be leaving UCL at the end of the summer, with very little in the way of professional “certainty” on my immediate horizon.
At the risk of sounding like I’m making excuses, despite my hopes for a return “my fieldsite” in India has inexorably receded out of view with the official demands of my institution and post.  What is equally clear, however, is that the bulk of my engagement with “the spirit” of fieldwork and ethnographic practice has come largely from outside of any established “research program.”  Instead, some of my most “ethnographic” work and thinking has come in getting to know the places I actually live and work(Walthamstow, a northeastern borough of Greater London, and Bloomsbury in central London), how to get around (primarily walking and public transportation, especially the Victoria Line on the London Underground), and the courses I’ve taught(especially my course on the Anthropology of Games and Simulation, where “contingency” is thematic).  It’s from those “sidelines” of life here I’ll be discussing my own career compulsions and ethnographic uncertainties.

Lane DeNicola is a Lecturer in Anthropology at University College London and the inaugural convener of UCL’s masters program in Digital Anthropology. His PhD in Science & Technology Studies was completed at RPI in 2007.

5 thoughts on “Dude, Where’s My Fieldsite?”