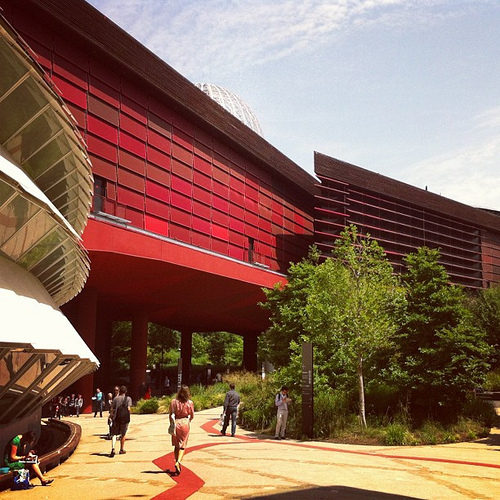 Ever since it opened in 2006, I’ve wanted to visit the Musée du quai Branly (MQB) in Paris, which “contains the collections of the now-closed Musée national des Arts d’Afrique et d’Océanie and the ethnographic department of the Musée de l’Homme.” With a permanent collection of over 267,000 objects and nearly 3,500 of those on display at any given time, it is one of the most important anthropology museums in the world. The building itself is also an impressive piece of architecture by Jean Nouvel—nicely setting off the collection. So I was happy to be able to finally visit the MQB this past Thursday. It was an awe-inspiring experience and I’m just sorry I didn’t have a week to spend at the museum, since it is truly too much to absorb in a single day. The permanent collection is divided up in to Asia, Oceania, Africa and The Americas. My recommendation would be to only try to visit one section per visit (and Oceania is so huge that it could easily accommodate two visits if you listen to the excellent audio tour).

I want to focus on one of their current special exhibitions: Les Maîtres du Désordre which was the highlight of our visit. Les Maîtres du Désordre reminds me of an MOMA exhibit I visited as a teenager: Primitivism in 20th Century Art: Affinity of the Tribal and the Modern. That exhibit looked at the impact of the very African and Pacific works now housed in the MQB upon the development of modern art. Both are large, ambitious exhibits which seek to draw comparisons across numerous cultures. Both also seek to find affinities between modern art and “primitive” art. So it is worth looking at what James Clifford wrote about the MOMA exhibit before looking at the one at the MQB.

In his essay “Histories of the Tribal and the Modern” Clifford criticized the MOMA show on several grounds: the comparative method used is flawed (they could just as easily have found “primitive” art works which did not resemble Picasso paintings as ones which did), the works they chose are decontextualized and removed from their cultural and historical context, they chose works which are unproblematically “pure” in that they are free of European or other obviously modern influences, and the African and Pacific works are seen primarily in terms of their importance for “our” cultural development from which “they” are excluded. (On the problematic aesthetization of traditional “art” also see Wyatt MacGaffey’s essay “‘Magic, or as we usually say ‘Art’.”)

To what extent is Les Maîtres du Désordre guilty of the same sins as the Primitivism exhibit at MOMA?

The following text appears near the entrance to the show:

The constant fight waged by gods against demons in the cosmologies of many different cultures illustrates this fragile equilibrium of the world. Order and chaos, destruction and creation follow each other cyclically and are at the root of the founding myths of our societies.

It is somewhat ironic that an exhibit about chaos and disorder would so thoroughly embrace a rather dated structuralist view of religion, but doing so allows curator Jean de Loisy to cast a large net, pulling together various disparate works into a single show. The exhibit is divided into themes related to liminality, trickster figures, shamans, healing, bacchanal, etc.—each room showcasing items from around the world and across several millennia. What this means is that the modern works included in the exhibit are seen through the same structuralist lens as the works from the museum’s archives. In so doing, de Loisy avoids one of the main problems Clifford identified with the MOMA exhibit: the viewing of “Primitive” art in terms of the “Modern.” Here, instead, everything is subsumed by the same (out of date) structuralist theory. I personally am happy to see an exhibit attempt to make an ambitious argument and fail than fail to make an argument in the first place. Nor do I mind that the theory is out of date if it allows the curator to do some interesting things, which it does…

At it’s heart, what makes this exhibit succeed are the fabulous museum pieces (including many nice video art installations) which de Loisy has chosen to gather together. As with the MQB museum as a whole, each individual work is stunning. (Mostly, anyway. The final room a “Feast of fools” doesn’t work at all.) And even if the exhibit itself doesn’t do much to contextualize the works (quite the opposite in fact) many of the works have a an associated audio guide narration which is often quite useful and interesting. There is also a room which contains a floating wall of TV monitors, each showing ethnographic interviews on a continuous loop, with phone-shaped headsets nearby allowing you to listen to each interview. I was limited in my ability to appreciate these interviews by my rusty-French, but I also noticed that most of the native speakers either skipped this room entirely or listened for a few seconds before moving on. I think the whole exhibit would have been much better if these interviews had been better integrated into the exhibit rather than being added as an afterthought.

Ultimately, my disappointment with the exhibit can be best illustrated by the failure to include one particular work that I fully expected to see: Les Maîtres Fous by Jean Rouch. One can easily see why this work wasn’t included. Where Rouch sought to explain Hauka ritual practices in terms of colonialism, de Loisy seems eager to avoid any mention of the colonial encounter whatsoever. Where Clifford criticizes the MOMA exhibit for failing to discuss cultural appropriation, de Loisy embraces the cultural appropriation of traditional practices by the New Age movement. It would be interesting to compare this exhibit with the previous one: Lilian Thuram’s show on Human Museums and “the invention of the savage” but I unfortunately missed that one. Still, despite my reservations, I am really happy I did get to see this show. I’d love to see more ethnographically informed museum shows with the same level of ambition. Perhaps one on 5,000 years of debt?

UPDATE: PDF of “Civilizations on the Seine: Sally Price’s Paris Primitive” by Geoffrey Miles White in the March issue of Museum Anthropology Review.