And now for some humorous and interesting, if not outright hilarious, socio-cultural phenomena for your anthropological Saturday morning.

The small background images on credit cards are a way in which people can personalize their credit cards and express a small part of their identity (along with everyone else who chooses the same theme, of course).  My Visa has a nice image of a Hawaiian seascape and sunset.  Very tranquil and beautiful.  It’s so I can feel like I’m on vacation from reality while I’m amassing debt, I suppose.

Well, the NPR Planet Money blog has a new piece about the latest version of the Mastercard in Germany: The Karl Marx MasterCard. 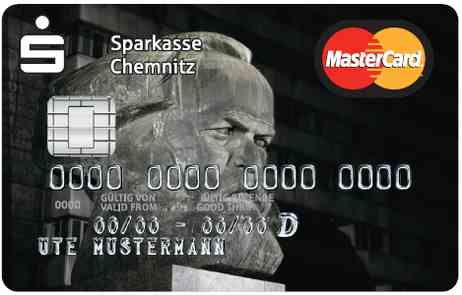 Image from the Sparkasse Chemnitz Bank

The German bank Sparkasse Chemnitz recently launched a Karl Marx credit card. The bank let people vote online for 10 different images, and Marx was the “very clear winner,” beating out a palace, a castle and a racetrack, among others. Reuters has more on the story.

The reader’s suggestions for potential taglines for the card are my favorite parts of this.  Here’s one good one:

Check out the rest of the readers taglines at Planet Money.  Some are really funny.  I love it when little everyday things are so loaded with meaning.  Granted, Marx is an extremely controversial individual in human history…but it’s pretty ironic that a big bank has decided to finally give him his due credit.

Ok, I’m done, I promise.  If you have any ideas for taglines, post them here and at Planet Money.

12 thoughts on “Giving Marx some credit”