This past Thursday I spent the morning floating in a sensory deprivation tank. I saw it on sale through Groupon and I thought, why not? An interesting experience, it was very relaxing and left me with a kind of euphoria which permeated my being for another two hours after the event. It put me in a gentle, mellow mood for the rest of the day. 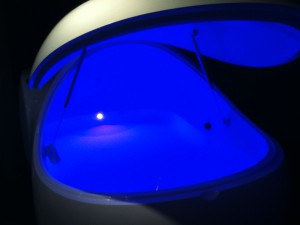 I found out about this place by following a link from an io9 post to a website called Float Finder, which puts people in touch with their local sensory deprivation center and also seems to be a hub for a whole tank-subculture. The io9 piece is really worth a read too, especially the bit on sensory deprivation pioneer John C. Lilly, a man who took intramuscular LSD until he discovered he could speak to dolphins.

Calling John C. Lilly eccentric would be akin to calling the Beatles a popular band – somehow “eccentric” just doesn’t do the man justice.

Perhaps it was the mystique of Lilly that inspired Altered States (1980), something of a cult flick among anthropologists, which stars William Hurt eating muscimol and floating in a tank until he manages to somehow de-evolve into a rampaging hominid. Personally I find the movie a bit of a dud (its been 12 years since I first saw it and haven’t really been tempted to revisit it) and I’m a fan of creature features and so-bad-its-good flicks.

The movie is best remembered for its funky, toxic freakouts:

Ok, so, you just saw the best part. But if you want to put it in your Netflix queue, you’ll be in good company among the consciousness studies crowd. Your enjoyment of the film may or may not be improved by being in an actual altered state.

I arrived at Float First early to watch an instructional video which emphasized safety, comfort, and not touching your eyes. “The only thing that can ruin a float is getting salt water in your eyes,” the attendant told me. While I sat through the orientation an older woman arrived for her second float and proceeded directly to her session. I, on the other hand, got the full tour. The attendant showed me the I-sopod and shower. I used the bathroom and rinsed off before climbing into the pod.

Because I had read the business’ website ahead of time I intentionally consumed less coffee than usual, but I did ingest 60mg of pseudoephedrine for my sinus congestion. I was not high, people. Just saying.

The room was a bit chilly when I stepped out of the shower. I climbed into the pod, which was lit with gentle colored lights and closed the bay door shut that was hinged like a hatchback trunk. Inside the water was warm and inviting, maybe less than a foot deep. Soon the air became moist and heavy. I pushed the button to kill the lights and began to experiment with getting comfortable. 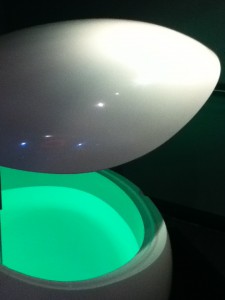 Some soft New Age music played as I sloshed around. The density of the water was so high it was pushing my shoulders up while my head was tilting back and I found it slightly uncomfortable to keep my arms at my side. The attendant had recommended keeping one’s arms above the head. Eventually I found it worked best to support my head by lacing my fingers together and resting that way.

I thought back to the advice the attendant gave me, “Try not to let your thoughts race. Don’t think: ‘How long have I been in here? When will the cool stuff start?’ The best thing to do for your first floating experience is just try and take a little nap.”

I stretched out. In the darkness and silence I could hear my muscles move. A full body stretch sent my heart racing, a pleasant sensation. In the distance I could sense vibrations. Perhaps these distant sounds came from the pod’s plumbing or maybe from the restaurant next door but I don’t think I hallucinated them. In fact I don’t think I had any auditory hallucinations at all. I have, in the past, have purely auditory dreams with no visual component so I wondered if that would manifest itself somehow in the tank, but not this time.

Once the lights were out it didn’t stay dark for long. Specks of visual apparitions were present almost immediately. It wasn’t until later that they became really bright. I spent most of the time floating with my eyes open, but I tried closing them too. In general the visuals were more intense with my eyes open though it was pitch black either way.

One difficulty in my experience was in keeping still. Any gentle movement could disturb the float as the body slowly, softly touched into the side of the pod where it was bounced back and forth like a pin ball in slow motion. The more calm the body became the more calm the mind. I think the sensation of the mind leaving the body probably works best if you’re motionless, but I became fidgety and curious about exploring my surroundings. In addition to stretching my limbs I tried sitting up a few times too.

At their most intense the visual effects were quite remarkable. My mental state was a bit like being caught in that threshold right before you fall asleep, but somehow lucid. Quieting the mind was the primary benefit I was looking to gain but I found it was not easy to do. At first I found myself thinking about work, about my mother’s death, about family problems concerning the foster family of my adopted daughter’s siblings. By concentrating on my breathing (one of the only things you can hear inside the pod) I was able to calm my mind with limited success. It was in this state of calm that I experienced the most pronounced visual hallucinations.

There was one hallucination in particular that, like an old friend, I’ve known since childhood. Every now and then I experience it still just as I’m falling asleep. It’s a bright slowly moving flash of white light. If you can, picture the rotating lantern at the top of a lighthouse. From a stable vantage point it would seem dim as the lamp was turned away from you then slowly sweeping across your field of vision becoming brightest as it shown directly at you before diminishing when he lamp rotated away.

My old friend the lighthouse was particularly well defined in the tank, usually moving from right to left across my field of non-vision. The light blobs had an amoeba-like shape, getting thick and then thin as it moved or growing tails like fish. They were yellowish to white, but not blindingly bright (those are especially unwelcome while falling asleep as they startle me awake). Accompanying this was a crackling lightning, a sort of shimmering Northern Lights in electric purple. This hallucination moved much faster and its shape more vascular. Typically these two hallucinations coincided although they didn’t seem to have anything to do with one another – meaning they didn’t interact or interfere with each other.

The really intense light shows were relatively brief and seemed to coincide with letting my mind go, concentrating on breathing, and not trying to force myself to see things.

Something special was happening with my sense of touch and awareness of body. The water is heated to the temperature of your skin and the air inside the pod quickly comes to match it. With the high density of the water countering the effects of gravity and it being total darkness one does not have a sense of the body as being discretely bound in the ordinary sense. Over time you stop feeling the water and only have the sensation of being suspended – floating like a grape stuck in a Jello mold. Sometimes this would bring about a sensation like falling or flying. I found I could trigger this with a stretch prompting my heart give a little race as I squeezed the blood in my muscles. In that rush there was a feeling like coming down for a landing.

The sensation of flying, the visuals, and the mental state of calm weren’t all neatly packaged. It took a little effort, but one gets the feeling that with practice you could get better at it.

After an extended period of time of not being able to orient my body I found I could convince myself that I was standing up rather than lying prone. Then, as an experiment, I tried to convince myself that I was standing on my head. This was somewhat harder to do. In a third experiment I tried to image that I was actually floating face down instead of face up, but couldn’t quite pull it off. Around this time my arms began to feel very heavy and moving them took real effort. It was a bit like Han Solo must have felt trapped in carbonite, as I pushed against what seemed to be a solid surface but was only air.

Well into the session now, my thoughts began to change too. I was tumbling through memories from the recent past going backwards. I thought of my life here in Virginia, my wife and how fetching she was in college. I saw others of my friends from college and the places we would go. I saw my high school and people I knew then. I remembered family vacations as a little boy and thought of my mother.

With my hands I touched my belly and legs. The Epsom salts had made my skin soft and pleasantly slimey. I brought a finger to my mouth and the salt tasted terrible, it made me spit. My muscles loosened and I could hear my stomach gurgle to itself. A knot in my back unkinked itself and my spine gave a crack like a knuckle.

In the distance the New Age-y music crept back in. This was my cue that an hour had passed and the session was over, but I didn’t want to leave. I waited a minute longer and the music gently made itself more present (you never know, I might have hallucinated it so I wanted to be sure). I made my way over to the light switch and the dim purple light was like a bold sunrise. I squinted. It was time to wake up, it was day even if my pupils still thought it was night. I pushed open the pod bay door and cold air rushed in. I scampered wet feet to the shower and turned on the hot water and steam. The salt sloughed off; my cell phone rang. It was time to go back to “reality”.

I dressed and prepared to leave. The attendant at the front desk offered me a bottle of water and spoke to me briefly about the experience. I told him about the difficulty I had in fidgeting and quieting the mind, which he assured me were typical of first time users. He quickly excused himself to ready the room for the next customer.

The drive home was truly pleasant and then I enjoyed a short walk around my neighborhood, stopping for tea at a friend’s house. I felt so mellow and peaceful, like having just stepped out of a hot tub after receiving a full body massage and waking from a satisfying nap all combined. Colors seemed brighter and the real world a little more magical.

The floating experience was worthwhile. I can definitely see how like massage or acupuncture the effects of floating would be cumulative. It was a treasure to have such a peaceful respite from what had been a stressful week. Highly recommended.

0 thoughts on “My Journey Through Innerspace”