(just to drive the point we have all been talking about home, this is a remix of Jason Jackson’s two recent posts on the state of scholarly publishing and open access in anthropology. The posts are excellent, and Jason is a very careful scholar, but sometimes he tends to bury the lead so I am rewriting this in a blunt, careless style that is imprecise but, hopefully, more informative. For the real deal, read his own posts)

With the annual American Anthropological Association annual meetings just around the corner in November, it’s time to start priming the pump with some topics for us to kvetch about in Montreal. We all talk constantly, for instance, about how for-profit publishing is taking over anthropology. But how bad is it really? What does a bird’s eye view of the journal publishing industry reveal? Jason answered this question by taking 75 of the most commonly read anthropology journals and seeing who was involved in publishing them. The take-away? Roughly 66% of our top journals are being run and published by Big Content, while only a third are under the control of non-for-profit publishers. 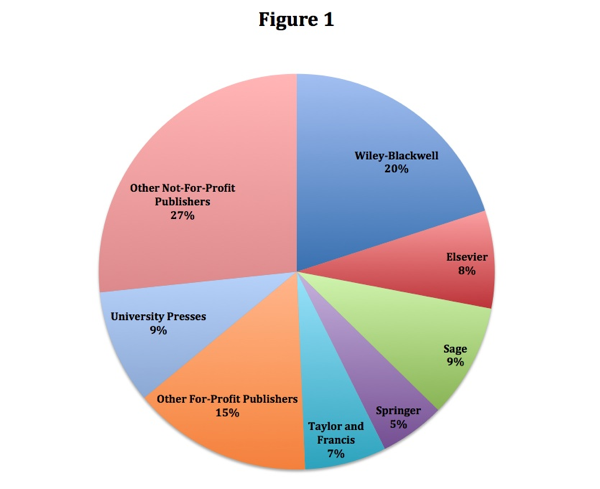 Where do these numbers come from? Jason got the list of 75 journals from the Thompson Reuters journals citation database, which measures the ‘impact factor’ of various journals. Although these rankings have not been a big deal to sociocultural anthropologists, they do matter in many other disciplines, and so this is as good a place to start as any. From there Jason pretty much just poured himself a big cup of coffee (or maybe something else?) and then tracked down who was involved in publishing each journal. He counted any for-profit involvement in publishing, so even though the American and British anthropology associations (the AAA and the RAI) are non-profit, their publishers Wiley-Blackwell is, and their journals got chalked up in the ‘for profit’ category.

One of the great, if slightly scary, things that Jason does with this chart is predict Wiley’s next move: if it really wanted to take over the world, it would buy Sage.

After reading Jason’s post, you might feel that anthropology’s publishing situation is like the last minute of Return of the Jedi, with Jason Jackson’s highly realistic synthetic hand being reattached by a medical droid while Wiley Fett spirits Tom Boellstorff back to Tatooine encased in a block of carbonite. You’d be right — there is still lots of hope in the situation, but it is up to us to see it through.

The reason is simple: as much as we like to bitch and moan about the evils of Wiley-Blackwell, Sage, Elsevier, and so on, the simple fact of the matters is that a lot of these publishers have a remarkably enlightened approach to open access. Most of them, for instance, will allow you to post publisher’s proofs (the final draft version of your article) on your website or institutional repository. When we read the table of contents for the latest American Anthropologist but can’t download the article, it is only most Wiley’s fault — if the actual author just posted their PDFs of the article online, we’d be set.

Of course, Big Content is still sucking our lifeblood from us money-wise, but it is important to recognize that they have opened the door to us to make our work available to, well, everyone — but only if we take the time to do so. They are betting that we won’t. Our greatest challenge going forward is to find ways to make sure that we do. What sort of institutions and incentives can do this? That, currently, is the million-dollar question.